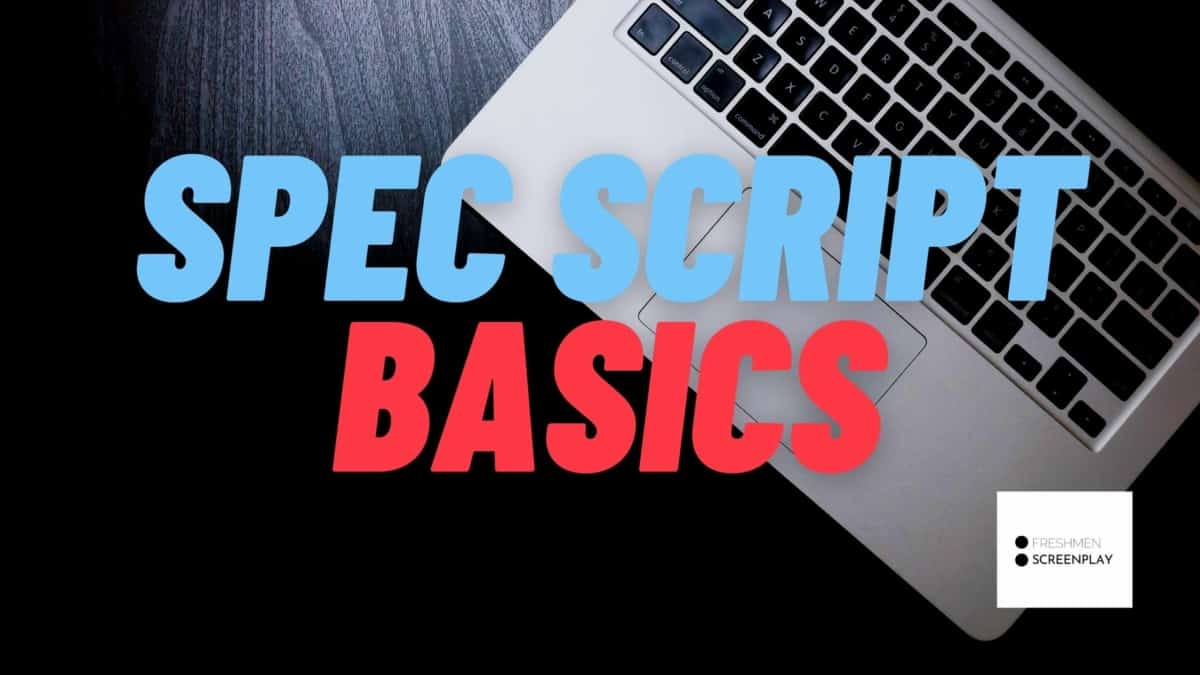 When I was writing my first screenplay, there were a lot of terms that I didn’t understand. Spec Script was one of them. Little did I know I was writing one.

What is a spec script? Spec script stands for a “speculative screenplay.” An original screenplay that is written for free in hopes a film producer or company buys it. Usually written by new writers looking to get into Hollywood. It can also serve as an example of your writing ability for a job in Hollywood.

Speculative meaning is a high risk of loss because the likelihood of optioning or selling a script is less than 1%. It’s better to showcase a writer’s talents to get a manager or agent.

Think of specs as a portfolio for a new writer as an artist to his paintings. You could sell one, but in 2021 it’s used to show what you can potentially do, so a producer can hire you to write what he wants to make.

This is somewhat different from a shooting script or production draft versions floating around on the internet.

What does a spec script look like? It’s simple, spacious, not overwritten with detail and character action.

Take a look at page one of the most famous spec scripts of all time, The Matrix, written in 1996.

Now let’s look at another spec script that also turned into a movie.

These are just excerpts from the first pages. Read other scripts like this, head over to IMSB. It’s a database for screenplays. And make sure you google spec scripts before you search on this site. It would help if you didn’t read production drafts accidentally. It can get confusing.

How long is a spec script? Generally anywhere from 90-110 pages. But specs can be shorter because of the last copious details in a production draft of a script or a script written by a writer-director. So don’t worry if your spec script is too short.

What is Needed in a Spec Script?

There are a lot of things that are needed in a spec script.

It goes beyond Fade In, Scene heading, Action, Character Name, Parenthetical, Dialogue, then Fade out.

It goes on and on.

But that’s for another article. Check out mine here titled Scene Description In Screenplays.

What is a writer’s voice? The style, combinations of words, diction, tone, point of view a writer uses to share the story.

Why is this important?

Voice is the only thing that makes your writing unique from others. It separates your spec from everyone else’s. Anyone can format a screenplay, but most people don’t write themselves into the script.

Are you planning on selling it? Or to show off your writing ability? If you want to sell it, you should have a high concept spec. This isn’t a film about a boy and a dog.

The Netflix film Bird Box, an evil entity making people go crazy, isn’t a concept. It’s a gimmick. The concept is when you see that the remaining people alive have to survive without using their eyes.

The Shallows Staring Blake Lively. A shark terrorizing a people is a gimmick. The concept is when she is stuck on a rock and has to figure out how to survive.

See how from the one sheet, you can tell exactly what the movie is about. That’s what a producer is looking for in a spec script.


The road to hell is paved with works-in-progress.
– Philip Roth

In other words, put your characters through hell and back.

Imagine your character is on a treadmill with fire behind them. If they stop, they die, and if they keep running, the treadmill will break. Now, figure it out if you write yourself in a corner. That’s a good thing. Putting yourself in the reader’s shoes and ultimately the audience in the theatre’s shoes. They don’t know what happens next, and neither do you.

To clarify numbers 2 and 3. This doesn’t mean that action films are the only spec scripts that sell. These are just examples I choose to include for the clearest examples.

What should a Spec Script not do?

The best way to tell you what goes into a spec script is to let you know was doesn’t go into one.

No draft dates or revision dates ever go into a spec script—also, no copyright logo or WGA numbers. I understand you want your work protected. So you should register your work with the Writers Guild, and the copywrite office but don’t put it on your script.

Scene numbers are in the back and front of every slugline. That’s for a production draft version of your script, not this version.

Camera directions are for the director to do. Unless you are a writer/director. Focus on the story and stay away from using directions. Remember you are writing this for a producer, agents, etc. You want to write the movie as if you were telling it to a friend.

Sometimes things can get confusing, and a simple “CUT TO:” can tell the reader that we are looking at something different. This is okay and excepted, but only if you see the reader getting completely lost without it.

Do not go crazy with putting too many caps through your spec script. The only real caps you should have are when a new character is introduced. You don’t want to be caping SOUND EFFECTS every page or even writing sound effects unless it’s necessary for the story.

5.) Repetition of an Action

You get it right.

Sometimes this includes information that can be assumed. Like in dialogue, you don’t need a parenthetical to tell the reader a character has an attitude when the words alone say it.

Overwriting is a huge problem for new writers because it’s hard to determine what it looks like. Simply put, overwriting is when you explain details that don’t matter to the story but matters to you.

Jumpcut sequences don’t need to be in a Spec Script.

Details like these bog down the reader and propels them into a world of skimming.

Take a look at this video of Whiplash, a movie written for the screen, not for the reader, and look at how much detail the script contains. This is a great script, but you shouldn’t do it if you’re an unknown.

Do Spec Scripts get Made?

Do specs still get made? Yes, they get made into movies but very rarely. About 1% are even sold, so less than that are made.

Most of the movies that are made today are based on IPs (intellectual properties). Movies like Harry Potter and Iron Man already have stories and judge audiences a studio wants to capitalize on.

Because they have a higher percentage of making money than a script from a no-named screenwriter, which they would have almost to double their marketing budget to get anyone aware of it. Why do that when this book is already well known by millions of people?

Should I write a spec script?

Should you write a spec script? Yes, if you are a film professional looking to break into the film industry, writing a spec is a great, totally free way to do it.

Most people in the industry, no matter what they do, now wrote specs at some point. Actors, producers, agents, cinematographers have all written. It’s a calling card, even if you don’t expect to write long-term. Today, most famous directors had written spec scripts when first starting and many never got to direct their first one.

Damien Chazelle, the LALA Land director, used to write horror films before they started to take him seriously.

So what is your main goal? To be a writer, writer-director, producer, actor? Whatever it is, a great way into Hollywood for FREE is to write your way in.

Where do you submit a Spec S?

Where should your spec be submitted? You should send your script to a screenplay aggregator, a database of scripts normally graded by companies and posted to a network of production companies to look through.

Doing this will give your script the best chance to be seen by people who matter—the development executive heads.

The long-term aim is to find an agent or manager who will bat for you and call every producer they have to sell your scripts for you or get you a job writing the next mission impossible.

Some great places include:

The blacklist is a website born from a survey conducted in the year 2005, the need to identify good unproduced screenplay lead to the innovation of this website. How does it work? you post your script on this database it gets a grade of 1-10. Producers scour the site looking for high-rated scripts to buy an option.

This is probably the best and leading talent source in the country and the world. It is known for its outstanding support of young talent, especially in TV and movie screenplays. BBC is open to anyone to submit for FREE, The script should be original and creative. It should not be a novel or adoption and if accepted you join the BBC and write for one of their many upcoming projects.

It’s exactly what it sounds like. A pLace to virally pitch producers using an outline, logline through email. And what’s great about this place is you are guaranteed a response from the producer. No more guessing if they like it. They have to tell you.

Check out my long article on where to submit scripts here.

Did I answer all your questions?

What type of spec are you writing?

What is a Spec Script? Everything a Beginner Needs to Know
Posted in Industry Knowledge By D.K.WilsonPosted on January 3, 2019July 25, 2021Tagged spec script, What is a spec script