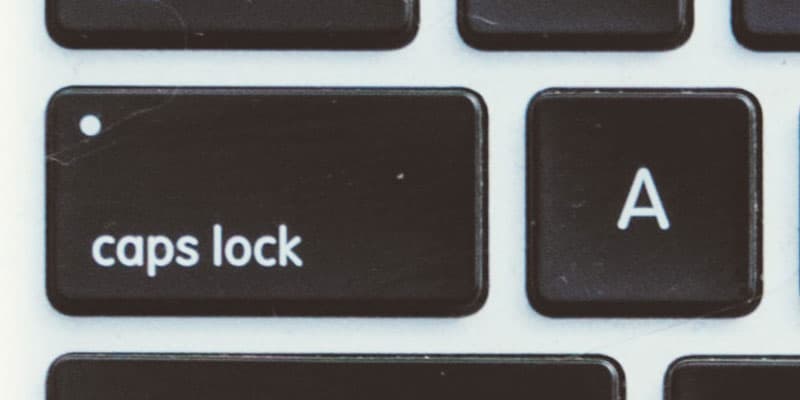 Screenplay formatting can be a hard thing to grasp. Especially for a beginner it can look like there is so much to memorize. On top of that it seems to be a lot of options such as the different ways to write the same thing. But, one thing is for certain. The same things in each script need to be capitalized. No matter what the situation is. Now what exactly are those words and situations?

Now the rules of formatting changes every time and for certain situations you can choose what to capitalize and what not.

Character names are always capitalized in a script before dialogue is presented. This seems to be a rule not something that has changed with time.

A script is essentially a story where people talk a lot. People have to know who is talking and when. The best way to determine this is by putting there name above what the person is saying and making it known by using ALL CAPS.

When someone new comes in the door, scene whatever it is you want to capitalize their name in the action line.

The main reasoning behind this is it draws the readers attention to something new. Imagine your writing a five action lines. A reader looking at the paragraph of words might skim through it but they will stop at the big letters like a billboard.

How to Introduce a Character

Slug lines are generally ALL CAPS. Why because something is changing within the scene and you want or need the reader to understand the change. Therefor you capitalize it.

Scene headings is one of the most valuable pieces of information in a script. Its obvious why its always all caps. Readers have to know where this is taking place and the time.

FADE IN:, FADE OUT:, CUT TO: and any other type of transition you would like to put in your script needs to be ALL CAPS. This helps visualize what the film looks like on screen.

Sound especially need CAPS. Imagine a horror movie where all the scares are silent it wouldn’t have the same effect. And the same goes for the script writing process. Sounds are generally always capitalized but not 100% of them.

Some sounds are more important than others. If your character stands up from a chair your not going to capitalize the chair moving back. That’s called is over doing it. The sounds that are more important are the ones that should get a reaction from the characters such as a door opening or a sword being swung.

Voice overs or (V.O.) as there called in scripts are always capitalized to give the reader an indication of where the character is talking from.

Headlines are anything your character see’s or reads.

For example if your character sees a sign for a store, or reads a magazine title or a newspaper headline. You would then capitalize the words such as “FIVE YEAR OLD TURNS UP MISSING” or “DOC MARTENS.” These are normally accompanied with quotations.

Say if your character is looking at a photo “INSERT — PHOTO” is normally capitalized and on its own separate line. Usually represents a closeup so be careful using it.

What Does Using all Caps Mean?

All CAPS are used when something needs special attention. Not just in screenplays but in anything. If you read magazines the biggest this is normally the attention grabber. So when it comes to words the biggest words are the most important. Using CAPS are meant to enhance the readers emotion and for dramatic effect for that given moment. Over using this technique will make your script boring.

Imagine eating amazing steak. Good right now imagine eating that steak everyday. Its still good but you don’t appreciate it as much as getting it once a month or once a year. The same goes for using this effect. Please use it sparingly.

Do you Capitalize Objects?

When writing objects you normally wouldn’t capitalize then in your script.

Maybe you would do it the first time its seen but never again. But even then this has limits. Again don’t capitalize the chair that someone sits in Its not important. But the knife the man takes out his jacket well OK please ALL CAPS that.

Do you Capitalize Actions?

You capitalize actions only if they deserve the attention to be capitalized. What deserves the attention? It’s completely up to you. No one can tell you whats important and whats not only you the screenwriter knows.

Do you Capitalize Extras in a Script?

Yes, of-course you do. Every time a new person in your script is introduced you capitalize them. It doesn’t mater if their the BARTENDER or the WAITRESS. If they are a new character they need to be known.

The main take away from this post if you don’t remember anything else is if your unsure on weather or not to capitalize something. Just ask yourself is what I’m about to capitalize VERY important information for the reader to know? If not then don’t do it.

Everything you need to CAPITALIZE in a Screenplay
Posted in Formating Help By D.K.WilsonPosted on December 25, 2019May 9, 2020