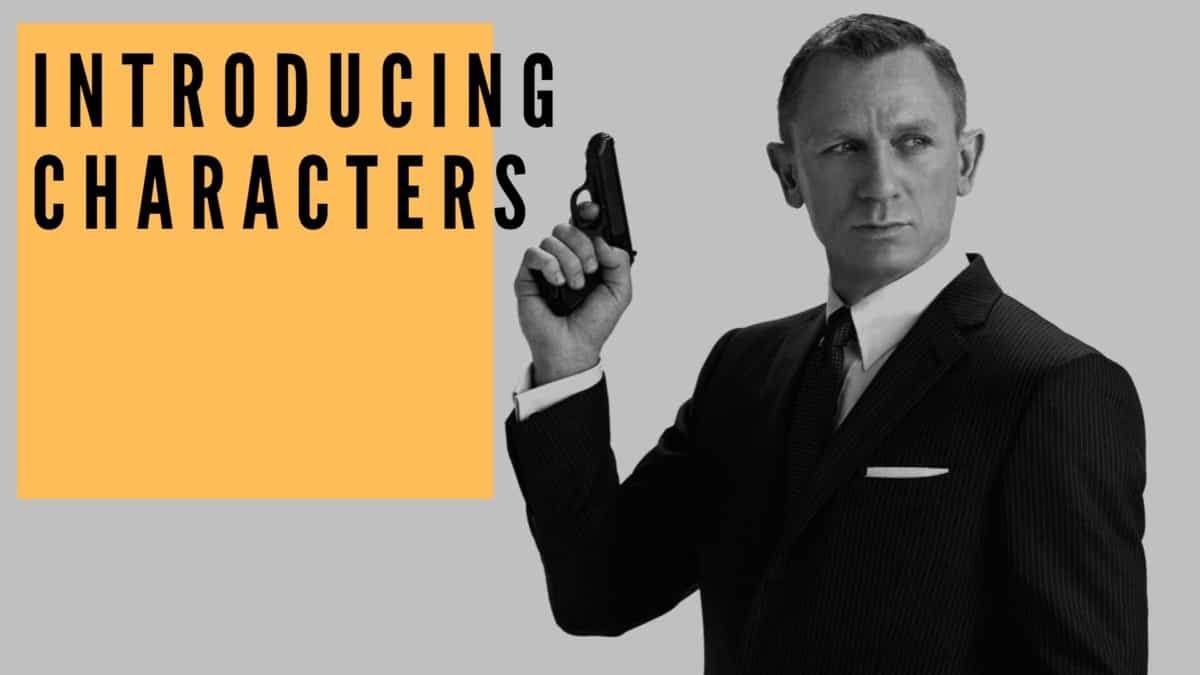 First impressions are the most important. At least that’s what everyone says. But they’re even more critical in screenwriting, how the reader sees your character can tell a lot about your writing especially in those first crucial ten pages.

Take a look at the example below for introducing Adolf Hitter after the war seemed to be over:

Sitting is ADOLF HITLER, mid-fifties, but the war has aged him an additional twenty. His voice and spirit are still intimidating, even though, deep down, he knows the battle is lost. He clings to colored pencils to mark a map for divisions of men that no longer exist.

Now that you know how to write a character introduction, there are better and more intresting ways to write one that will make producers head spin. In a right the way of course. Those are listed below.

Even with the strategy above, there are still pitfalls you want to avoid and things you want to keep in mind. Not every character introduction has to be the same, and not everyone has to be different.

1.) The first thing they do is the most important.

Have you ever heard that actions speak louder than words? Well, this is true in scripts as well as in real life. If a person is breathing, irregularly and eyes are switching across the room. You might assume that man or women is crazy, mad, or just unhealthy. But definitely right.

David Mamet says actions describe character more than any dialogue can ever. Think about what action your character can do that will tell your reader who this person is.

2.) How other people act around them speaks volumes.

Bringing me to my second point about how people act around your character can also tell a reader all they need to know. I remember when I was a child, and my mother walked into the room after we all know we did something wrong. All my friends and I shut up immediately.

What does this say about my mother?

3.) Describe their characteristics, not the character.

“Characteristics are a feature or quality belonging typically to a person serving to identify them.”

For example, Intelligence is a characteristic.

But lets not just think of positive ones if it’s a bad light character you can also find words and phrases that will paint them in an unlikable light.

Another way to show a character is through body language if someone is hunched over that’s a sign of less confidence. Get creative when thinking about how to describe how people act.

4.) Where we meet a character says a lot.

Imagine seeing a grown man in a suit climbing out of a dumpster.

What would you might assume about him? Think about the locations we see these characters in. This note expands a little on what a character does but a dark alley or the top floor of a hotel gives context without many words used.

5.) Keep it brief. Remember, people have no attention span.

Lastly and one that might be obvious but keep it brief. Like earlier in the article, three sentences should be the max. The fewer words you use, the better. This rule goes for every line in your script actually.

Use words and phrases that say a lot without too many words. Condense your sentences. for example:

She looks as if she wants to have her cake and eat it too.

What not to do?

Unless a specific physical feature they have is apart of the story. Like the hunchback of Notre-Dame or an eye patch wearer.

Other than that. If you write them as 6’0 feet tall, blonde hair, mustache, orange suit, big shoulders, the casting director and the costume designers head is going to spin in circles trying to find the best actor with that description.

Its best never to describe someone physical attributes if any. But if you must mention the most important one only.

You might be saying my character has an accident. I would reply with “So what.”

Is the fact that he/she has an accent relevant to describing who the character is as a person? The answer is almost always no. If you want to portray them as a ruthless, mean character and give them a heavy Russian accent, Think of the way they carry themselves to describe how mean they could be.

It’s hard, I know, but this is how your character descriptions stand out. We are shooting for excellence here, not basic.

Again unless what there wearing is essential to the story. Think to yourself, are they Batman where you have to describe his utility belt? No, then move on.

Clothing is an easy and cheap way of describing. Anyone can do it lets dig deeper to reveal who they are. People don’t wear the same clothes every day. If they do, then it may be worth describing.

When you first start writing character introductions, you can start with this simple template to follow:

You can’t go wrong with it. Is it best for every situation? maybe not especially if you’re introducing multiple characters, but readers will at least know you understand how to communicate correctly. Please refer to the “do’s” and “dont’s” listen above when writing your 1-3 sentences.

Once you’ve mastered this form may be in your first draft. You can then you can get more creative with it. For example, switch up the order for more of an impact on the reader.

Examples of Introducing a Character in a script

In the halway… Well past 50… unliked, unloved unsettling. A huge pain in the ass to everyone he’s ever met.

Inside is mia 27, Nevada raised. Six Years of no in L.A. has toughened her but shes still a dreamer. She seems to be on the phone speaking into her cars system. Fast fiery and full of energy.

Lou’s 30… pure primal id… if there’s music it’s in his head…disconnected… feral… Driven by dollar signs and some dream of some imagined Eden.

ON A RINGING TELEPHONE.

DECKARD is standing near the noodle bar, waiting for a seat. He’s in his thirties, wiry, athletic, rumpled, used unshaven.

It is a studio apartment that seems overgrown with technology.

Weed like cables coil everywhere, duck taped into thickets that wind up and around the legs of several desks. Tabletops are filled with cannibalized equipment that lay open like an authorized corpse.

At the center of this technological rats nest is NEO, a man who knows more about living inside a computer than outside one.

MARK ZUCKERBERG is a sweat looking 19 years old who lacks any physical, intimidating attributes masks very complicated and dangerous anger. He has trouble making eye contact and sometimes it hard to tell if he’s talking to you or himself.

What do they all the character introductions have in common?

They all introduce the characters name, age, and brief intuitive description.

Remeber name is only essential for the screenplay in some films the name of the character isn’t nearly crucial and isn’t given, but we will leave that for the director to decide. So just for the script purposes if your character isn’t named. Something simple like “The Man” or “Shadowy Figure” is also acceptable as place holders.

Age is important but as you can see from the examples above the exact age isn’t necessary. The reader needs to get an age range in the head. Age helps people visualize what the person looks like.

What do I mean by a brief Intuitive description? A description that is less than three sentences long and lets the reader imagine what the person looks like instead of telling them what they look like. What does this difference look like? For example:

Women stare when he walks by.

How to Introduce Multiple Characters in a Screenplay

From my research, there are two ways of introducing multiple characters in a script.

The first way is to let their actions and dialogue reveal who the characters are themselves. You can tell a lot about a character just by there actions and words.

If the first time we see a character and there brushing there hair, applying makeup and then she throws on some sunglasses and walks into Walmart. It’s safe to assume she cares a little too much about her looks.

A great example of this is Quentin Tarantino’s first film, Reservoir Dogs. The opening scene where he has all of his characters sit around a diner. take a look and a read.

In this film you see the use of Dialuge is heavy. But more importantly, the dialogue is around pop culture pop culture. Use of pop culture is great because everyone on earth knows who Madana is, so you get a great sense of who someone is when they say “I hate Madona.”

Then there is the use of the language some people curse some people don’t. Some people talk a lot; some people say only a word. Their character is revealing themselves in this opening scene before our eyes. For how to do this type of dialogue check out my blog post:

How to perfect what characters say

giving a memorable line for each role in a typical introduction. Of course, this will make the section longer, but as long as you keep the introduction one punchy line per person, it won’t be too much for the reader.

Think about twitter people have become masters at shortening sentences to get there point across in fewer words. This technique, of course, takes practice but is very possible. An excellent example script is “Predator.” Why because it introduces seven people all at once. Below is a short snippet from the script:

When thinking of introducing a female character, there are a couple of things you want to keep in mind, especially if you’re a male writer.

If she is supposed to be the love interest, of course, she’s attractive we don’t have to say that. Maybe in that situation, you might use what she’s wearing but if you can help it, don’t. Use the techniques listed above and give your female characters the same flare you would like your male characters to have.

When to introduce a character

For example, maybe they’re all at a table and since this is a script and its not a visual representation we cant see everyone at the table. Unless you ay, in the beginning, “five people sit at a round table,” you can surprise a reader by having character talk and then give their introduction.

This technique is giving the same effect as a camera that only shows the people talking and the audience not knowing whos in the room until your finished.

How to Write Character Intro’s in a Script (Template, Examples)
Posted in How to Guides By D.K.WilsonPosted on September 25, 2019May 9, 2020