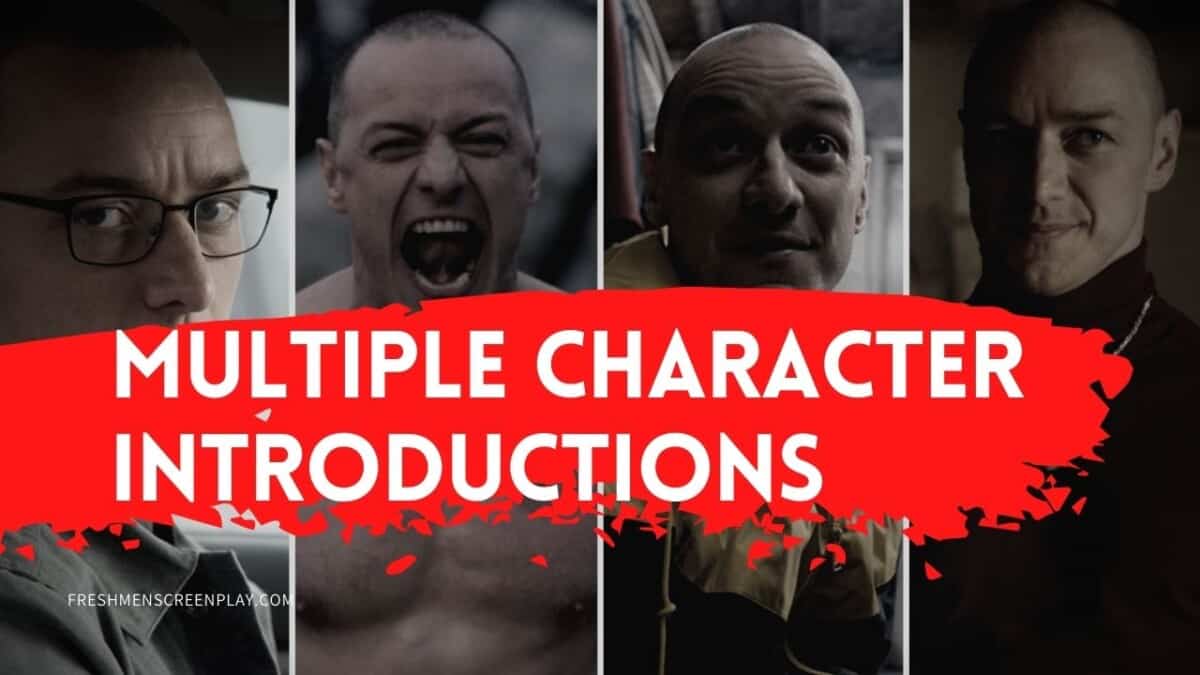 We’ve already already talked about introducing characters but what about multiple ones in the same scene. It can be tricky to introduce multiple characters in a screenplay, even for seasoned scriptwriters.

A group introduction is the first opportunity to hook your reader in your screenplay. It can make or break a reader’s first impression of the characters, and potentially the entire screenplay. If executed poorly, it can be disorienting for the reader.

In Reservoir Dogs Quentin Tarentino gave each character a different way of speaking, decision to made, and attitude about mundane topics to tell the reader what each character was like.

Now this is only one way to do it.

There are many ways to introduce multiple characters in the same scene. Keep reading for the other ways.

Introduce Many Characters by a Fixed set of Characteristics

Where character descriptions are lacking, scriptwriters can highlight their characters’ unique personalities through their actions and dialogue.

From Predator, written by Jim Thomas and John Thomas

The chopper scene from Predator introduces five members of a rescue team: Blain, Mac, Ramirez, Hawkins and Billy. The manner in which they handled their weapons illustrated the character’s entrance. Together, they formed a cohesive personality for each member of the team.

For instance, Billy’s cool deposition, combined with his repeated action of replacing the firing mechanism of his weapon, suggests that he is calm in the face of calamity.

This is in contrast to Blain’s ultra-tough exterior and his sharp display of his weapon just to slice through a plug of tobacco. He embodies brute strength.

Show, don’t tell. Character introductions can be further enhanced by dialogue. Through the use of slurs and insults when tobacco is rejected, Blain’s over-the-top masculinity is apparent.

Introduce Multiple Characters by using a Character Outside of the Ensemble

A common technique used to introduce many characters at the same time is to show them through the lens of an outsider to the ensemble.

This character acts as a conduit between the reader and the ensemble, allowing the writer to convey the traits of each member of the ensemble. Whether the outsider is familiar with the ensemble or meeting them for the first time determines the depth of the character description.

In this scene, Cady (and the reader by proxy) is introduced to the two supporting members of the Plastics: Gretchen and Karen. She sees them for the first time on a football field and her first impression of them is coloured by the dialogue of Janis and Damien.

Pick the Right Scene to Introduce Many Characters

Setting is another key element in multiple character introductions.

In fact, the situation in which any character introduction takes place gives the reader extra information on the character. When introducing multiple characters in a screenplay, the way the characters react to a situation can highlight their similarities and differences.

Going back to Reservoir Dogs The conversations seem like a flow of friendly breakfast banter, but individual character’s personalities are revealed through different situations. One such situation revolved around tipping the waitress.

Joe imposes himself as the obvious leader of the group by paying. Mr. White refuses to pay, which speaks to a stingy, calculative nature.’

After much back and forth, Mr Orange rats Mr White out to Joe, hinting at signs of being a tell-tale. These traits are all carried forward and developed later in the movie, setting the foundation for each of the character’s fate.

This example shows that it is not necessary to stage a scene to introduce multiple characters in a screenplay. Natural reactions to a normal situation can also be telling of your character’s personality.

The number one rule of writing screenplays is to keep it simple, from formatting to stage directions. This applies to multiple character introductions as well.

With so many names jammed into a single scene, readers and viewers can get character names mixed up. Pick names that sound phonetically different and are easy to pronounce to streamline the introduction process and make the dialogue less confusing.

It is also important to pay attention to the dynamic between the characters when picking names.

Combine these ways in the first scenes to make your characters stand out as much as possible:

Engineering a scene to introduce many characters at the same time can definitely get messy. With a spark of inspiration and right techniques, a successful multiple character introduction will resonate through your script and anchor your whole screenplay.

What way are you planning to introduce your characters?

How do you Introduce Multiple Characters at Once in a Script?
Posted in How to Guides By D.K.WilsonPosted on June 17, 2021June 17, 2021Tagged introducing characters, multiple characters