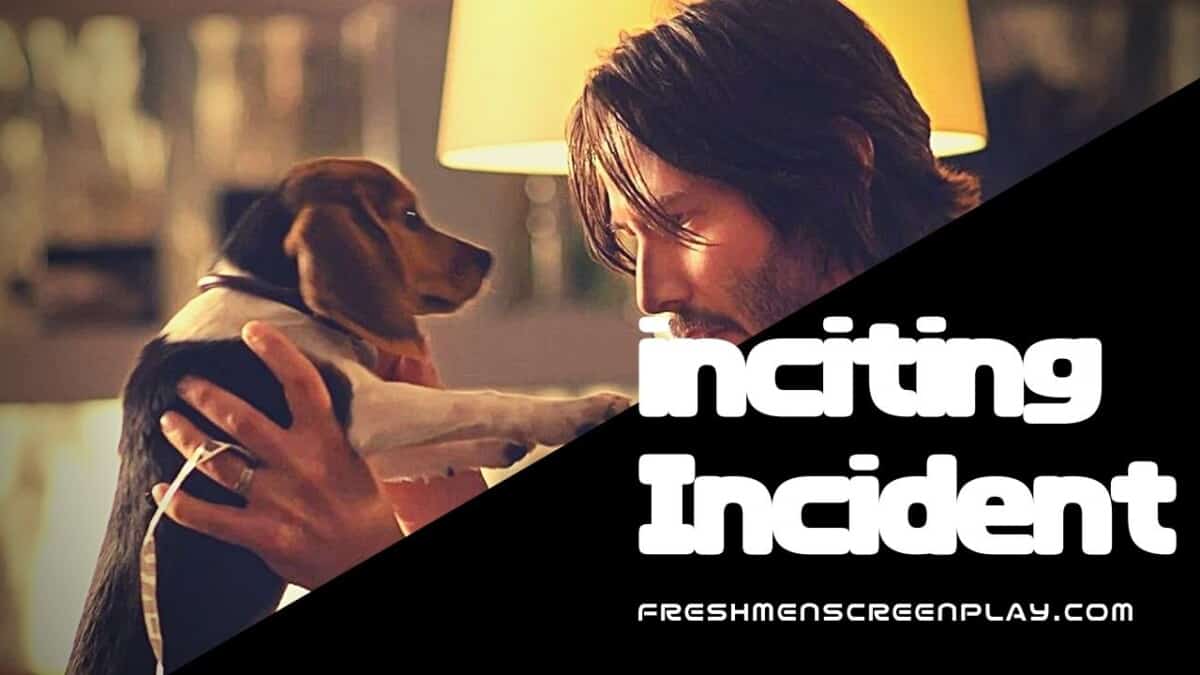 Everything has to start somewhere. Screenplays are no exception. Your hero’s story needs to be triggered by something, an event that leads them into the adventure that you’ll take them on throughout the script. That’s the inciting incident, and without a strong one, your story will never properly begin.

So how do you write a solid, effective inciting incident? Let’s explore.

What Is an Inciting Incident a screenplay? An inciting incident in a script is a point in your when your protagonist is presented with a situation that is out of the ordinary, one to which they will have to respond, taking the actions that make up the rest of the screenplay to accomplish a goal. Get the money, girl, position, etc.

It generally happens in the middle of act one, after you’ve introduced the hero and their world. They may be hesitant, but they are thrust into a new situation in which they must act.

In the classic hero’s journey, a “chosen one” will experience an inciting incident in which they find out that they have been called to a certain mission.

Neo was living a mundane life until his computer screen starts talking to him and he followed what it said.

⦁ Elle Woods finds out that her boyfriend, Warner, breaks up with her because he wants a more serious girlfriend. (Legally Blonde)
⦁ Charlie Bucket gets a golden ticket to Willy Wonka’s chocolate factory. (Willy Wonka & the Chocolate Factory)
⦁ Bella Swan moves to Forks and meets Edward Cullen. (Twilight)
⦁ Jules asks Seth and Evan to buy alcohol for her party. (Superbad)
⦁ Andie gets a job at the magazine Runway as Miranda Priestly’s assistant. (The Devil Wears Prada)
⦁ Mia Thermopolis discovers that she is a princess. (The Princess Diaries)
⦁ Margaret discovers that she is in danger of being deported from the United States. (The Proposal)

What every inciting incident must have

As you can see, all of these inciting incidents are unique, but they each have something in common – the thing that an inciting incident must be able to do in order to work – they spur the heroes of their stories to act.

Elle Woods will try to get into Harvard Law School to win back Warner, Seth and Evan will go to any lengths to get alcohol, and Margaret will fake marriage with her employee to be allowed to stay in America.

Regardless of the unique circumstances of your inciting incident, it must light a fire under your hero’s butt to do something.

Characteristics of an Inciting Incident

It’s a common mistake for beginner screenwriters to fumble when putting together their inciting incidents, which are trickier than they seem. So here are some elements that must be present for an event to be considered an inciting incident.

1.) The event must be external.

It’s something that happens to your protagonist that makes them respond in a certain way. The protagonist making a choice on their own to set out on a certain adventure doesn’t count as an inciting incident.

If Queen Latifah’s character in Last Holiday decided on her own to take a luxury vacation in Europe, it wouldn’t make for nearly as interesting a story as we get when she does it in response to being diagnosed with a rare brain condition that leaves her with only a few weeks to live.

That is to say:

⦁ A group of friends getting bored and deciding to wander around Las Vegas and have zany adventures: not an inciting incident
⦁ A group of friends realizing that they’ve been roofied and lost their friend Doug the night before his wedding having to wander around Las Vegas to retrace their steps and find him: an inciting incident

2.) Must also have urgency.

It can’t cause your protagonist to act whenever they get around to it; it must cause them to act now because if they don’t, something bad will happen. This is what gives your screenplay stakes that will keep your audience invested throughout the course of the film.

When his son Nemo goes missing, Marlin must go out and find urgently, or else he will lose his son forever. When John McClane becomes the only person in his building not to be taken hostage by terrorists, he must use his luck to rescue the hostages or else they might die.

Now, we’re not saying that all inciting incidents should create stakes that are life or death, but they should feel that way for the character.

3.) Your inciting incident will also function as a form of characterization.

Your character’s unique reaction to it is what will lead them through the rest of the script. Not everybody would necessarily respond to the inciting incident as they do. Still, because of who they are, it affects them in a specific manner, creating motivation and awakening a special desire.

Would just anybody respond to being broken up with when they thought they are going to be proposed to by studying hard and getting into Harvard in order to win their boyfriend back? No, but Elle Woods would.

If you haven’t gotten the idea quite yet, let’s look at a couple more examples in more detail.

We’ll start with a classic: The Graduate.

In this film, the inciting incident happens when Mrs. Robinson asks Benjamin to drive her home and then tries to seduce him. While they don’t sleep together this time, the understanding that Mrs. Robinson is attracted to Benjamin and available to him sexually whenever he wants awakens in him a desire to sleep with her that he will act upon for the rest of the film.

It’s important to note that Benjamin doesn’t just have a crush on Mrs. Robinson and decides to act on it on his own. Her first attempt at seduction is something that happens to him and something that he responds to accordingly.

Now, let’s explore a more modern example of an inciting incident in a screenplay.

In Juno, the inciting incident is when Juno gets pregnant, tries to get an abortion, and realizes that she can’t go through with it. As a result of the inciting incident, Juno spends the rest of the script trying to arrange an adoption for her unborn child with a nice couple.

Juno’s inciting incident works because it is unique to Juno. Not every teen girl would react the same way to getting pregnant and hearing that their unborn fetus has fingernails. But for Juno, this makes her feel like she is unable to go through with her abortion.

Equally unwilling to have a baby, Juno ultimately decides to have her baby adopted by a couple that she will choose herself, which leads to the plot of the rest of the film.

As you can see, inciting incidents are absolutely crucial in screenplays. Do them well, and you’ll set yourself up for success in the rest of the script.

What’s the inciting incident in your script look like? What makes it unique?

Whatever your answers are lets hear it in the comments below.