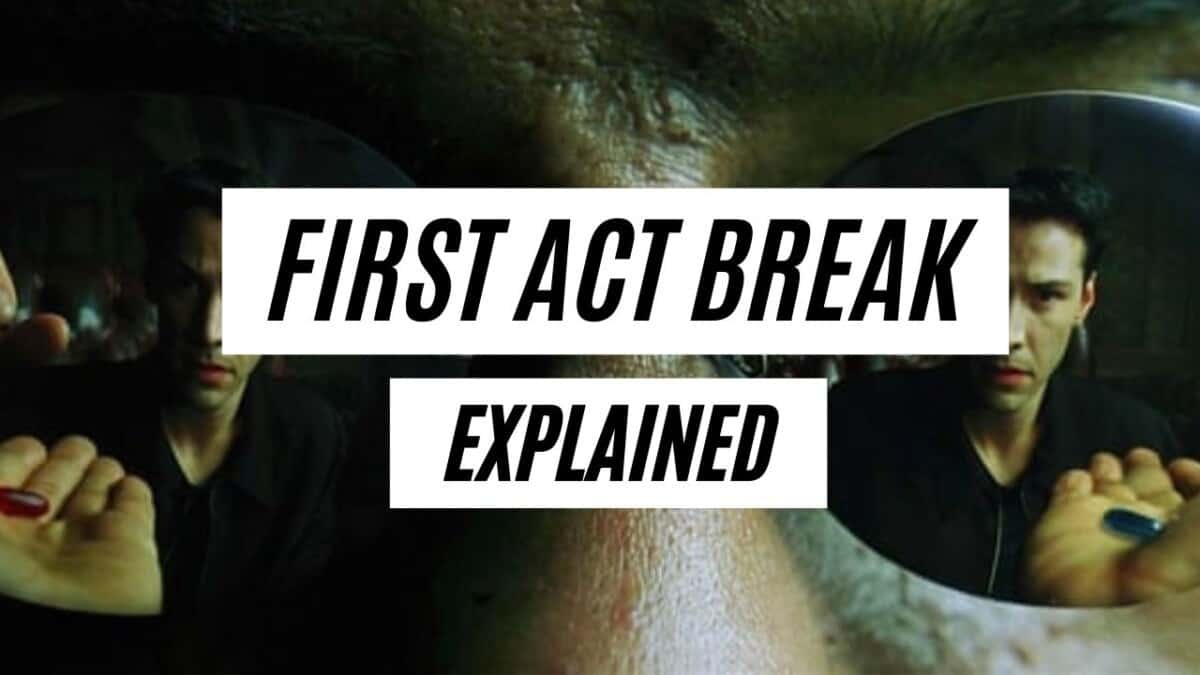 Ideally, when you’re writing a screenplay, every moment – every line of dialogue, every action, and every plot point – will work. But there are some elements that, if they aren’t working, will cause your whole screenplay to fall apart. The first act break is one of them.

As the first transition between two different acts of the script, the first act break is critical for bringing your audience into the world you’ve created.

Here’s everything you need to know about it.

After introducing your hero, their world, and their problem, it’s time to actually set them off onto the journey that they will be on for the rest of the script.

The Hangover, when the crew wakes up and realizes that they’ve lost their memories of the previous night and their friend Doug, they commit to retracting their steps throughout Las Vegas and finding him before his wedding. That’s the first act break.

Then they have this conversation.

When Does the First Act Break Normally Happen?

In our Hangover example, the moment when the gang first heads out into Vegas to begin recreating the previous night comes on page 29, smack-dab in the middle of our typical first act break page range.

For your protagonist, the first act break happens at the moment when he or she reluctantly makes the decision to leave behind everything that they know and set out into the unknown. It’s the point of no return.

Remember from this moment in the script the protagonist opens a box of worms and can never put the worms back into the box again.

Think of Neo plunging down the rabbit hole and waking up in the real world after taking the red pill or Elliot bringing E.T. into his room.

How Does the First Act Break Happen?

In order for a first act break to work, there are a few other elements that you have to have. Without these, your first act break just won’t be able to happen, no matter how hard you try to force it.

First, you have to introduce your hero properly. We have to know who they are, what they’re good at, and – most importantly – what they’re bad at. What’s their weakness?

Then, you have set up the hero’s world as it is before everything starts to go haywire. What’s important to them? Who are the other characters in their world? What do they have to lose (what are the stakes)? And what might be missing in their life?

Then, most importantly, you have to have an inciting incident. This is the event that gives your hero something to respond to and a new desire that will propel them throughout the entire movie. This is a problem that your protagonist’s unique response to will make them take the actions they choose for the rest of the screenplay.

With all of these things in place, you have all the elements we need to understand the first act break.

In nearly any movie you watch, you’ll find a first act break. Here are a couple that might be familiar.

Let’s start with a classic, Ridley Scott’s Alien (1979). In this script, the first act break is around page 40, when Kane is attacked by a creature that breaks out of an egg, leading to the crew of the Nostromo having to fight the Alien for the rest of the film.

Or how about the most recent winner of the Oscar for best original screenplay, Emerald Fennel’s Promising Young Woman? Here, the first act break comes relatively late, on page 50, when Cassandra finds out that Al, the man who raped her best friend, is getting married and decides to find him and get revenge on him.

Can you identify the first act break in your favorite movies? And, most importantly, can you find it in your screenplay?