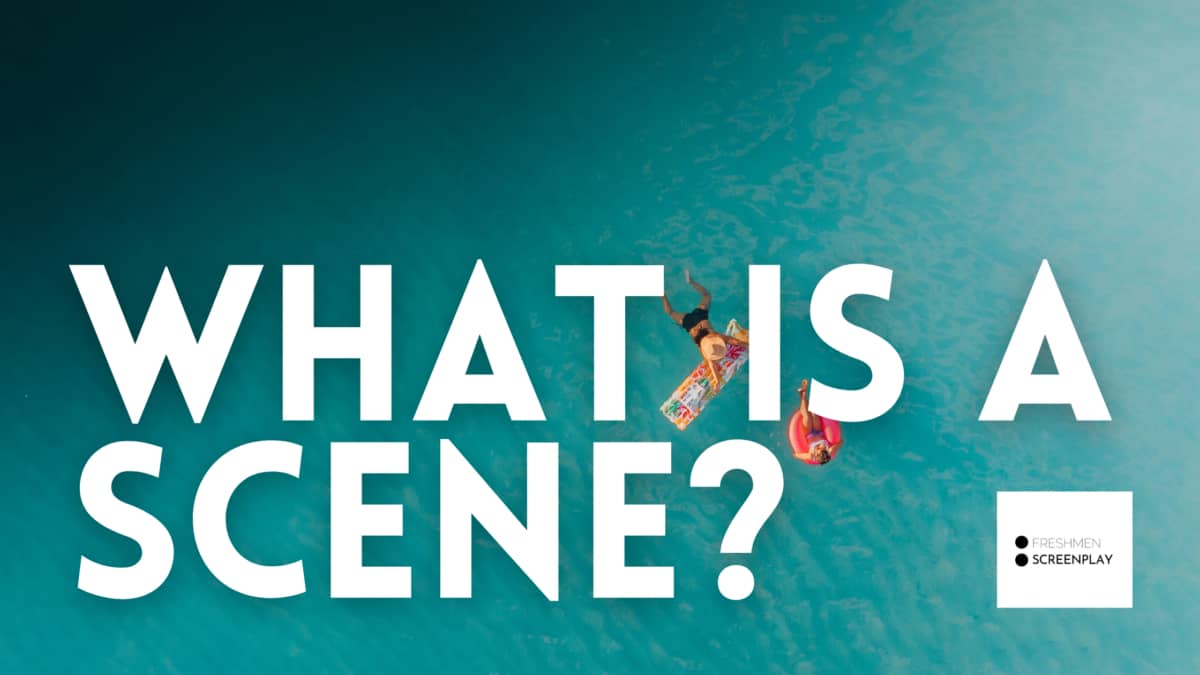 A scene is a basic unit that constitutes a screenplay when strung together in a row of multiples. As such, screenwriters deal in scenes as the basis of their craft, meaning that having a good grasp of what a scene is essential for success in screenwriting.

In this article, we’ll define a scene, explain its purpose, and offer examples.

What Is a Scene in a Screenplay?

A scene is a unit of a story told in a script. Crucially, a scene takes place during a certain place and time. As soon as the place and/or time change, it will necessarily become a new scene.

Let’s dig into the nuances of scenes in screenplays.

When Does the Scene Change in a Screenplay?

Let’s look at an example.

Say you’re writing a straightforward, short screenplay about a man who wakes up in the morning and takes his dog for a walk.

Your first scene might occur in the character’s bedroom, in the daytime, while his alarm goes off and he gets out of bed. This is one scene.

The next thing that happens in the script is that the man steps outside with his dog and starts walking. This is another scene. Why? Because the place changed: the man has gone from his bedroom to his street. Even if the time of day has stayed the same, it must be a new scene.

What if you choose to write the scene this way: the man falls asleep at night, then wakes up and looks for his dog’s leash? Your first scene would show your character falling asleep. Then, the next thing the audience sees – the man waking up – would be a new scene because, even though it still takes place in the bedroom, it’s a new time.

Naturally, if both the time and place change – like if your first scene takes place in his bedroom in the morning and the second scene in his backyard at night – it will have to be two separate scenes, too.

How Do You Identify Scenes in a Screenplay?

When you see a slugline, it indicates that a new scene is beginning.

As you can see, the slugline indicates the time and place of the scene, as these are the two factors that must stay consistent throughout the entire scene.

The scene heading is made up of three parts.

First, it says whether the scene takes place inside (INT.) or outside (EXT.).

Then, it names the location where the scene takes place. This location name will stay consistent for every scene in this location for the rest of the screenplay.

Finally, the scene heading ends by indicating the time of day. It will often either be DAY or NIGHT, but sometimes screenwriters will get more specific and write DAWN or DUSK.

You will know when a scene is over because a new scene will begin. That is to say that the scene heading of the subsequent scene can be taken as an indicator that the previous scene has concluded.

What Is the Purpose of a Scene in a Screenplay?

The purpose of a sene is to advance the story’s plot and give the reader information they need to know about its characters, setting, and world.

If you’re not advancing the story forward, the scene has no purpose.

Another thing a scene needs to do is create questions in the audience’s head. This keeps the viewer trying to guess what happens next. A scene gives a question and promises an answer.

When you’re watching a film, you are essentially watching a series of scenes one after the other. Without a scene, there is no screenplay or movie.

That means that, as a screenwriter, you tell your story through the scenes that you write.

Here is an example of a scene in Noah Baumbach’s Marriage Story (2019).

This scene takes place inside a theater at night. You can tell it’s over because the next scene begins:

While it’s still inside and at night, the next scene takes place in a different location (and presumably a few hours later, at a different time), so it must be a new scene.

Scenes can be both short and long. The first scene example, in the theater, is only about half of a page. In contrast, the restaurant scene spans three and a half pages.

Ultimately, the details of your scene – its time, place, and length – should serve the greater story of your screenplay.

Which tip from today’s guide are you going to use?

What are your favorite screenplay scenes?

A Scene in a Screenplay Simply Explained
Posted in Formating Help By D.K.WilsonPosted on July 20, 2021July 28, 2021Tagged Scene, What is a scene