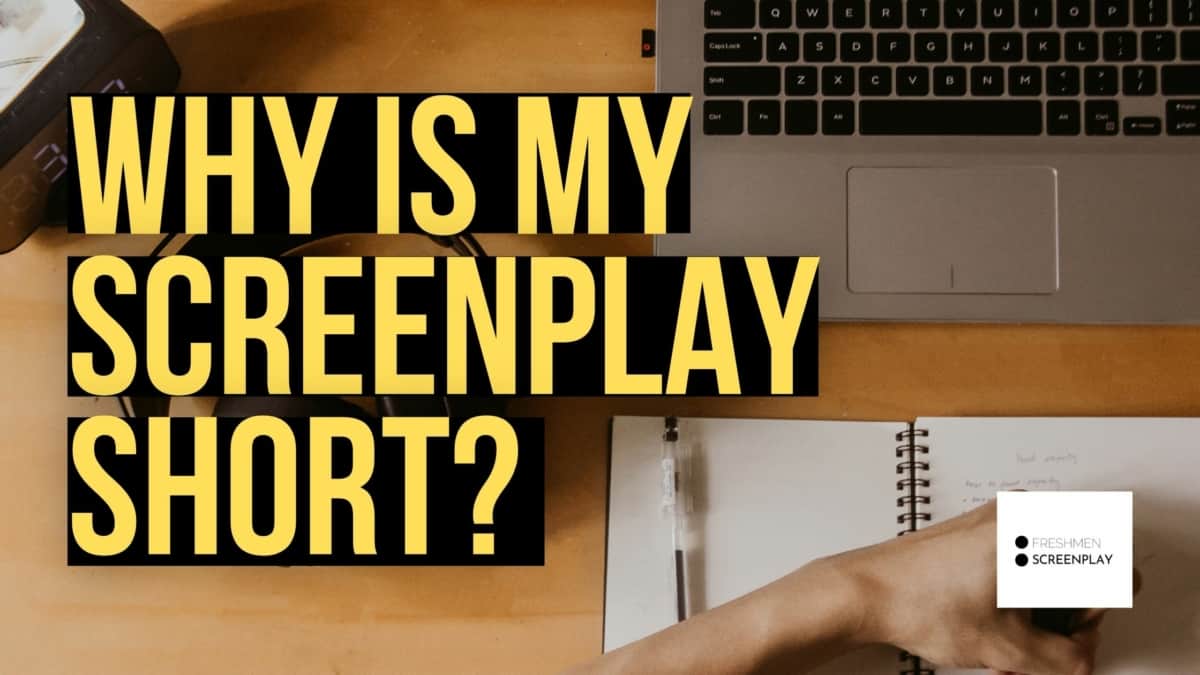 In this article, we’ll ask whether short screenplays present a problem, how to judge the right length for your project, and what to do if you still believe you’re coming up short.

Did you know that usually, each screenplay page equates to about one minute of screen time? Therefore, if your screenplay is 82 pages long, expect to translate to around 82 minutes in duration.

Why is your screenplay too short? It’s too short because your screenplay’s structure acts normally act 2 doesn’t have enough problems or conflict for your protagonist to overcome.

Some other reasons may be:

Producers expect screenplays to come in between 90 and 110 pages since that’s the minimum length of most commercial movies. Any script below 90 pages may be considered unusually brief, but this does not mean it can’t be adapted into a successful film.

Read on to find out whether this is really true and what you might do about it, as well as examples of short successful screenplays.

Let’s look at the average length of screenplays in different genres to determine if your 70-page script is even okay or not.

In 2019, data analyst Stephen Follows analyzed over 12,000 scripts to glean some insights into the “average” script. Below are his findings on screenplay length:

The median length across all genres was 106 pages, equating to one hour and 46 minutes of screen-time. The range Fellows found ranged from 80 pages to 140. 68.5% of scripts came in between 90 and 100 pages in length.

One interesting finding is how short horror scripts were compared to other genres. In part, this may be because of the low-budget nature of many horror films, but it may also be due to the taut structure of such films not lending themselves to slow pacing and multiple climaxes.

Another notable trend, horror aside, as screenplay subjects move further away from contemporary “real-life” tales, is that their lengths tend to expand. This is because you have to explain more about the world of the story. Meaning longer descriptions.

If your are writing horror, a script that is 80 pages is completely fine. If you’re writing a Syfy film, an 80 pager will likely mean you are missing key details and should revisit your script.

Professional screenwriters shorthand action sequences such as car chases or fight scenes, knowing that the director, stunt coordinators, performers, and editor will create intricate sequences for the finished film.

Think about films in the James Bond, John Wick, or Fast and Furious Franchises. It is unlikely that every punch, shot, or wheel-spin has been meticulously crafted on the page. Instead, a shorter version will be indicated, giving room for the director to elaborate.

Consider the famous “Close Call” scene from the first Mission Impossible film, where Tom Cruise is dangling from wires in an attempt not to trip any alarms as he tries to steal data from a computer system. Here’s the scene; it plays out as a highly tense 2 minutes and 42 seconds.

Compare the one minute sequence in the script:

What does Atmospheric mean? Atmosphere refers to the tone of how the script is written. Just because something is written short doesn’t mean it feels that way. The words described can paint a picture of a long shot in the reader’s head. While still not cracking the 90-page mark.

Films that feature long, lingering shots and little dialogue will tend to produce shorter scripts since screenwriters are always recommended to take a “less is more” approach to scene description. Directors who favor long, slow takes and slow pacing will naturally expand scenes that may fill half a screenplay page into several minutes on screen.

The Reader, listed above, is a good example. The film, starring Kate Winslet and Ralph Fiennes, has a melancholy feel and a pace that reinforces its themes of regret, shame, and reflection. The director, Stephen Daldry, creates scenes from unspoken moments, which might be single lines on the page, but are expanded into minute-long sequences.

Arthouse filmmakers like Terrence Malick, Bela Tarr, and Andrei Tarkovsky make films that can be three to eight hours in duration. These epics will have significantly shorter scripts.

However, unless you are also the director, you cannot know how long the final film will be, so it makes sense to presume that it will be closer in length to the “rule of thumb” duration of your script.

It’s possible you have an issue with the structure of your script, and the problem commonly lies with either a short-second act or an abrupt ending. Here are some questions you might ask yourself:

⦁ Did I ramp up the tension in the second act to breaking point or resolve things too soon?
⦁ Are there enough twists and turns on the way to the climax at the end of Act Two?
⦁ Have I been given enough time to resolve any B-plots?
⦁ Is my ending too sudden and abrupt?
⦁ Have I written an ending that satisfies genre expectations?

In a horror movie, if the slasher dies suddenly offscreen, the answer to that last question is almost certainly no.

You should avoid padding out scripts with verbiage, and you definitely want to avoid sneaky tricks like changing the margins or the point size of the text. Producers are savvy about such things!

Instead, consider whether you’ve done justice to your characters’ journeys. Have you described action sequences in enough detail to make them exciting to read on the page? Did your stint on dialogue in that final confrontation?

Assuming you have chosen a subject with sufficient events to create a viable full-length movie, it may simply be the case that you have made a structural error in your hurry to reach the dénouement.

No Structural Errors – What Else Should I Consider?

If you have shorthanded action sequences because you want to build space for the director’s imagination, consider fleshing out those scenes. This is especially useful if you can use the action to reveal character.

Think about the droplet of perspiration falling from Ethan Hunt’s forehead in Mission Impossible – it shows that he is under immense pressure and he’s not superhuman. When he manages to catch the falling droplet, it demonstrates his lightning-fast reflexes and resourcefulness, as well as being a thrilling moment. You should be able to write those action beats, as well as scene-setting descriptions.

Consider that the screenplay for the 2011 Oscar-winning film The Artist came in at 44 pages. Admittedly, this was for a modern-day silent movie, which relied on physical comedy and visual storytelling, but it demonstrates that less sometimes IS more.

Ultimately, if your script is exciting, moving, funny, or otherwise engrossing, and you’ve you’re your due diligence on structure and format, nobody will mind it coming in a little short.

So, why is your screenplay so short? It can be a lot of factors mentioned in this post.

But the question you should ask yourself is:

Suppose you are entertaining people on the page. It doesn’t matter. Take a look at some of the shortest screenplays ever written above. It didn’t matter for them, so it might not with you.

How short is your screenplay? What reasons do you think it’s that short.

4 thoughts on “Why is My Screenplay Too Short?”