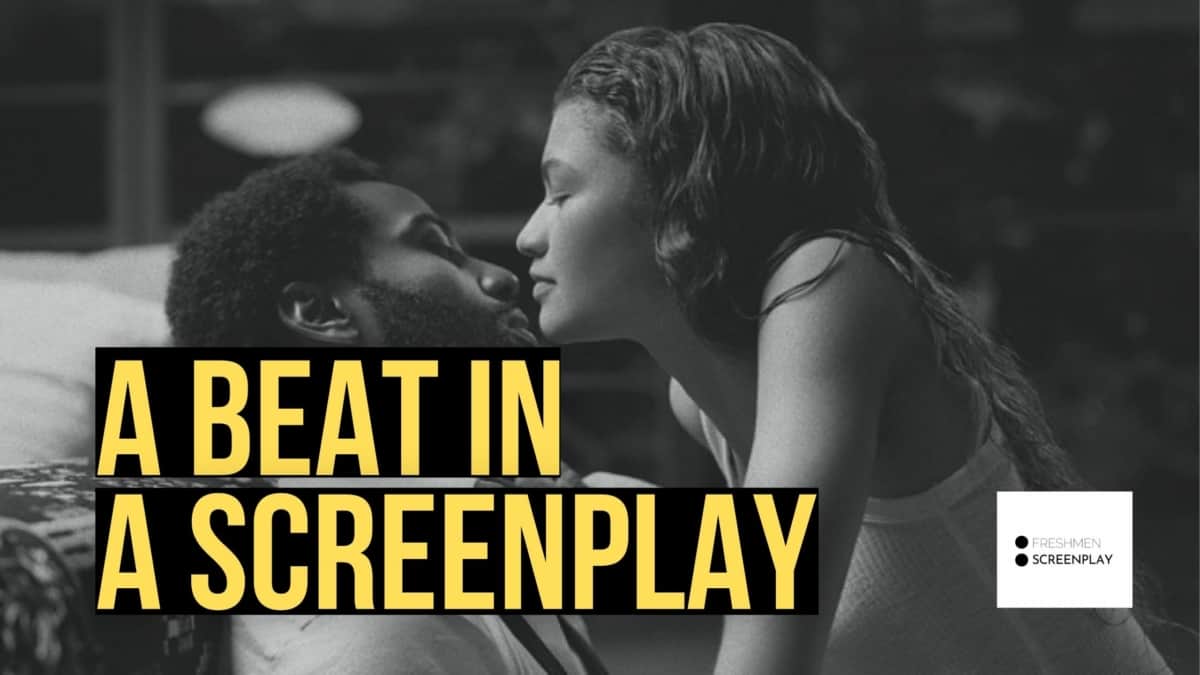 It took a while for me to understand what the term “Beat” fully means because there are multiple meanings.

Here we will discuss all of them. Starting with the most popular.

What is a beat in a screenplay? A beat is the smallest action of a scene.

This would be two beats.

It’s not limited to characters moving or reacting.

If an object of importance in your script were to fall off a table and break, this would also be considered two beats. The director would have to film the fall and then cut to the breaking of the object. Anything that a film would cut to can be considered a beat in a script.

How Do You Use Beat in a Script?

How do you use a beat? You use a beat by writing the word “beat” on its own action line. Using the term this way represents a pause, hesitation, or silence within the scene.

The purpose of this is to shift the tone of the scene. Now let’s look at some beats used in script examples.

There are more creative ways of using this term. You can describe the emotion of the beat itself by giving your character something to do.

You can also use the beat in a parenthetical. Some writers prefer this because it takes up less space on the page, making your script shorter for a producer to read.

It might also change the context of how actors see the beat in between dialogue could affect how they choose to pace their lines. I.e switching the rhythm of their words.

Generally, you want to stay away from writing the word beat in dialogue boxes, but it doesn’t matter here because this film was greenlight. Meaning they already had the money to produce it.

Let’s see a scene from this movie in action. Listen to the conversation pauses. Each one of these is a beat written in the script. Within the first ten seconds, she asked a question and he answers. there is a beat before he answers take a look.

Now that you understand the format. I do have to warn you of the overuse of this when writing spec scripts. You want to keep it to about one per five pages. The more you use it, the less powerful it becomes. The director Sam Levinson used it so much in this film because he was writing a production draft.

Technically writing short action can be considered a beat and normally is. The word itself is not necessary to get the same effect.

Let’s look at two examples that say the same thing.

The first way leaves it up to the imagination of how one character might react to the situation. The second paints a more vivid picture.

It’s just a quick way of letting the reader know something struck a nerve or something shocking happened; let’s take a moment.

The last way of using beats are referring to the plot. These are called plot beats or key events that happen within your screenplay. Something happens then that causes something else to happen. These, unlike the definition above, are huge moments that need to happen driving the script forwards.

But this is for another article.

A beat is a quick way of letting the reader know something struck a nerve or something shocking happened; let’s take a moment.

In what ways are you planning on using beats in your script?

What does Beat Really Mean in a Script?
Posted in Formating Help By D.K.WilsonPosted on January 9, 2019October 5, 2021Tagged beat, beat in a screenplay, what is a beat