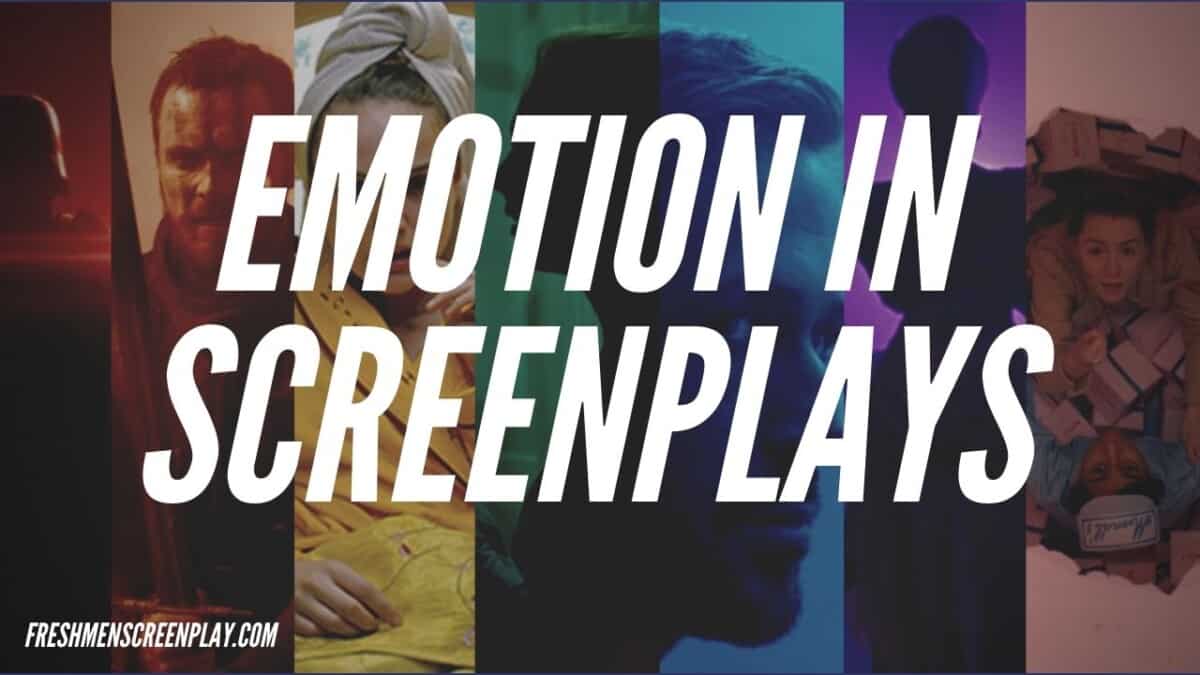 When I wrote my first feature, I got a note I never thought I would get.

We cant see this? Describe this emotion in a way we can see.

Now sometimes you might struggle with good action verbs to show character emotion. I know I did.

For a quick fix, I bought a book called: 1,000 Strong Verbs. This book got me thinking about character actions in a new way.

It won’t always give you an exact action but maybe ideas of how to say something.

There are multiple ways to do this other than just the actions of the character. Take a look at the different ways below.

Five ways to Show Emotion in a Screenplay

Character action is by far the best but sometimes not the most efficient. Some methods below could be quicker to get it across to your reader.

It’s best to stack some of these together to send your reader the exact emotion you’re trying to portray.

The Dialogue itself can portray emotion. What a character says is essential a feeling of a scene.

Both dialogue lines mean the same thing. John dislikes and wants to get rid of Sarah. The emotion is in the line. But the second one gives it in a way that’s not right out expressing it.

When writing emotional dialogue, think about how both characters feel about each other and how you can say it without bluntly doing it.

Parentheticals can give words a whole new meaning. By adding one, you change the tone the reader hears the words.

Now you hear John in a different emotional tone. He sounds more lovey-dovey, or maybe you hear serious or wise. The point is he’s no longer hating Sarah.

3.) Emotions through the Situation / Dilemma

Having a good dilemma for your main character will translate emotion in a scene creating subtext for every word spoken.

A dilemma is where both options are equally bad and or good.

In my script, my main character has two choices, to remember himself and his purpose in life, which would mean leaving his children. Or become the father he always wanted and stay clueless to who he is as a person.

This writes emotion itself. No matter what your character chooses, the reader will feel the emotion in words.

How to Write Different Emotions in a Screenplay

How to write anger in a screenplay? You write anger by giving your character an angry action in response to the character’s situation.

Think of what your character would do when he/she is angry, then have them follow that action.

How do you show a character’s happiness in a script? You do this by demonstrating what your character would do when they feel joy in the action line of a script.

How do you show a character being sad in a screenplay? You show this by giving a sad physical reaction in the character’s action line.

It is starting to sound repetitive. Right?

Because it is, think about what your character is feeling and coming up with ideas on how they would respond.

Rules for Writing Emotions in Screenplays

How can we show this through all four methods listed above and not tell the reader precisely what someone is feeling? Telling takes the reader out of the story.  Always follow this rule.

Check out this excellent book for more clarification.

This book is great for handling character emotions if it’s something you struggle with within your scripts.

The faster you can get the thought across, the better. Scripts are about speed. No one wants to read a page-long action of how long someone beats a tree with a bat. It’s like we get it. Move on.

Now with all four powerful tools of action lines, dialogue, parentheticals, and dilemmas. You should have no problem combining and mixing these to generate the emotion on the page.

What emotion are you having difficulty showing in your screenplay?

Whatever your answers are, let’s hear it in the comments below.

One thought on “How to Write Emotions in Screenplays”