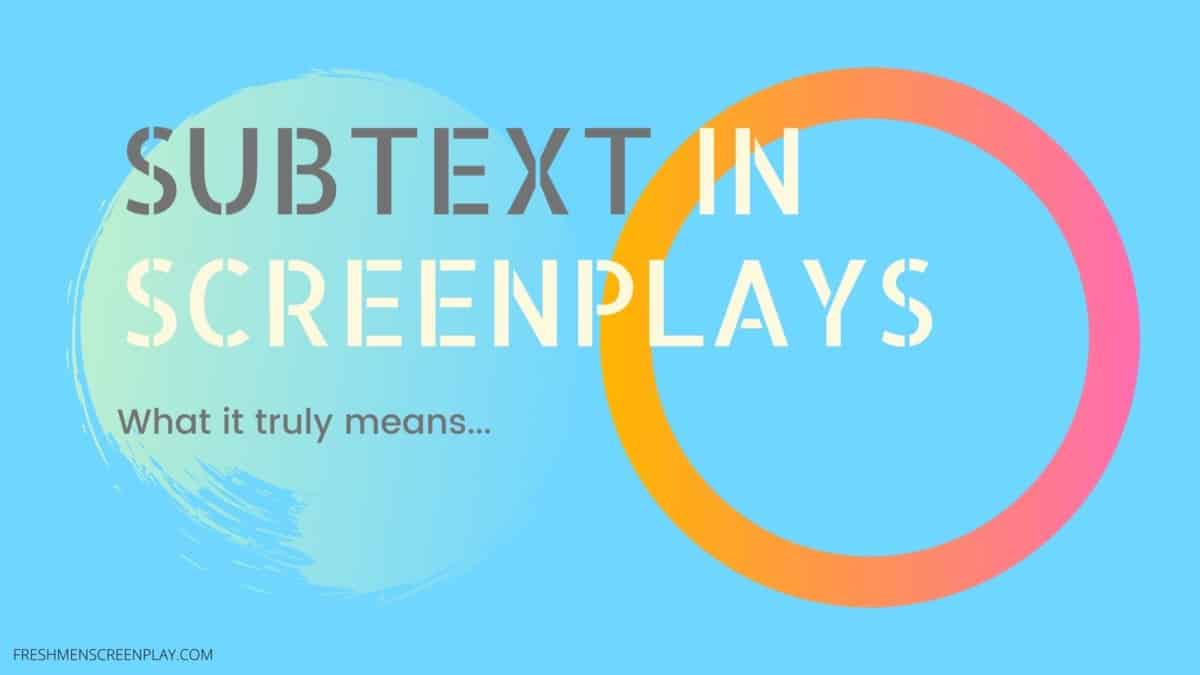 In this post, you will learn three ways to introduce subtext in a screenplay.

First, let us answer the question

Do you feel what’s about to happen?

There’s a feeling of romance, love or desire. Right?

What do her action really mean?

We can’t tell everything from four lines but we get that much.

What’s the subtext in this scenario?

What do her words really mean?

I don’t want to be around you right now.

Maybe the man and woman know each other. Maybe he’s her X husband or X co-worker. You notice how I’m using language to describe they are no longer on good terms.

She seems mad or frustrated about something and looking at him triggered it.

What is subtext? Subtext is a line of written text that has another meaning that’s not specifically stated.

Let’s go back to the line “What floor are you on?“

It can either mean:

You really don’t know what it means. Not yet.

You the reader have to keep reading to find out.

It’s somewhat related to tone but not precisely because subtext can change every other line, whereas tone is something that normally is throughout a script.

Action is the number one way to create subtext.

What someone does or doesn’t do can have double or even triple meanings.

It can be as big as a swing of a sword or as small as a pause or beat.

Each action can create some sort of subtext meaning.

In this film Andrew the student is the sole reason his band teacher Fletcher was fired from the school. Andrew wants to know if Fletcher knows this truth.

Look at the subtle actions Damien Chazelle writes in the script as Andrew is fishing to see if Fletcher knows he got him fired.

“He looks at Andrew. A moment of tension. Does he know…?“

Subtextually what does the look really mean?

It means “hey do you know I got you fired?”

Subtextually what does the laugh really mean?

It means “I feel so much better you don’t know.”

Questions you should ask yourself when creating action

Even in real life peoples words often are the surface layer of what they truly mean or feel.

In this classic Tarantino movie. Jules had a revelation and is now trying to change his ways. Which for him was a life of fast money and killing.

So he does something different by not killing the two people trying to rob him. And the way his new position shows he’s trying to change his old ways.

“Im trying real hard to be the Shepard”

What does Jules speech really mean?

The subtext meaning of this is “I’ve changed my evil ways and I’m trying to be good. Please let me be good.”

Questions you should ask yourself when creating dialogue

What do scene locations have to do with anything?

Well, the place you pick for your scenes can have a huge impact on the feeling of a scene.

Let’s imagine two friends let’s call them Red and Maran. Red wants to confront Maran about his issues. Maran says “Okay sure, meet me at this address at two.”

The character Maran because he chooses to meet at a kid’s playhouse, what does this location say about Maran subtextually?

Question you should ask yourself when picking a location

How to pack Subtext in a Scene

Lets’ put this all together.

What happens when you add subtext in all three places.

Take a look at this scene between a husband a wife. who are now separated.

When should you use Subtext?

Now that you properly know what subtext is and how to use it.

It’s not something you want to throw around every single line.

In the examples above have you noticed all the subtext used is when someone wanted something.

In whiplash Andrew wanted to know if Fletcher knew the truth.

In Pulp fiction Jules wanted the thief to know he’s trying to change his evil ways.

The only other time is during the high emotional points of the script.

But even then it still expresses the characters true desires.

Imagine if every word of dialogue had a double meaning.

It would be boring. Just like everything in screenwriting. Using it at the right time for the right purpose is the difference between a professional and an amateur.

Today you learned what subtext is and what it looked like in a screenplay.

And the three ways to create subtext in scripts. which are:

You also learned when to use it.

What technique are you going to use from this post?

What are some great examples of subtext you’ve seen in the last year?

Leave a comment so we can talk about it. I would love to chat with you.