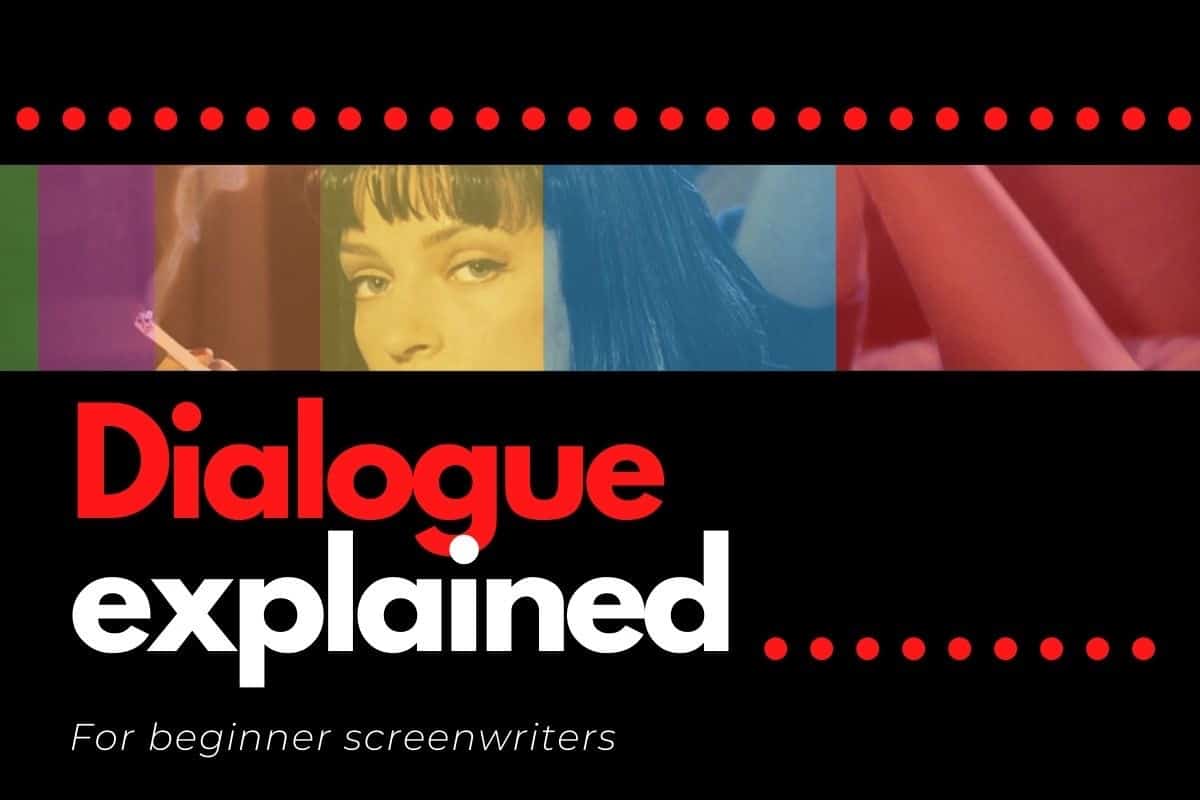 In this post, you’re going to learn ten tips on improving your screenplay dialogue.

I put together this list from my script consultations with professional working screenwriters.

To help all the newer writers saving time in their screenwriting process.

I hope you get a couple of new techniques you can use to improve your screenplays.

1.) Inject Conflict into Your Dialogue

This is the number one thing I can tell you that will vastly improve your dialogue instantly.

“Characters only speak to get something from one another.”

But, what does this mean?

Characters need to be after something and when they can’t get it by themselves. Characters then have to speak to get it.

When they do speak, it shows the hero’s wants or goals if you will. And how it differs from the antagonist’s goals.

Let’s look at an example from Kill Bill VOL.1.

The Bride, played by Uma Thurman, wants revenge for her missing baby and killed fiancé.

Vernita Green wants to live for her new family.

After a short battle with Vernita Green, they decide to postpone the fight to spare Vernita’s child, who just came home from school. Let’s listen to the conflict in their conversation.

Make sure both answers are yes after reading a scene from your script.

What stops writers from writing conflict naturally is creating too much small talk.

Small talk are formalities we all express when meeting someone or talking to someone we haven’t seen for a long time. I like to call it an introductory language.

But, you’ve heard small talk in movies before, right?

Of course you have.

What makes there small talk work?

Small talk only works when we know about the pre-existing conflict between the people before they start talking.

Otherwise the audience gets bored.

Imagine the conversation above, but we know one of the women dates the X husband of the other. And she secretly hates her for it. The questions about the kids now take on a new meaning. It breathes life into small talk.

Tips to Create Conflict in Dialogue

2.) Each Character Should Have Their Own Personality

Individualism amount your characters seem like a sharp but not so obvious tip.

As writers, it’s natural to fall into the trap of having all the characters mirror each other, causing them to sound the same.

Especially as we keep writing, all are individuals at first, but over time, they blend into what sounds like one person talking.

Think to yourself how would character (X) respond to this comment and situation for every line you write.

16personalites.com is excellent and FREE.

You would answer about 60 questions pretending to be your character. Then it will give you how that person will respond in certain situations such as a romantic environment, workplace, and so on.

Another trick I do is after the first draft I go back and rewrite one character part only. This way, I can fully immerse myself into that character.

Characters, as well as people, have different ways of speaking; we know this to be true, but a unique way of separating them is by education levels.

By switching up the level of vocabulary you use for each person, its a sure-fire way to make sure they never sound alike.

For example, a doctor with 3 degrees would talk differently from a high school kid. Not just because of how much they know but also their place in the world.

In your head right now can make up a conversation between two people just like that and hear the difference.

You must do this with each of your characters.

Remember who you’re writing about and incorporate that in every fasciate of the dialogue.

We speak differently depending on who we are talking to.

Mother, father, brother, best friend, co-worker. They all get a different version of us.

How relaxed or serious, respectful you are changing with each person. So make sure your characters do the same.

For example, In my show film, I just wrote. The respect level of the language changed when the friends were talking to someone they perceived as superior.

It literally went from cursing and making fun of each other to “nice to meet you; my name is Damian.”

Doing this, you’re able to show the dynamics between each character. The audience or the readers can see who’s in control and who’s not very quickly.

Don’t ever tell the audience what they already know.

Simple, but if something was already shown earlier in the film no need to explain or especially say it ever again.

Doing so is disrespectful to the audience. You’re assuming that they aren’t paying attention. And if you do this too many times they won’t be.

Please note I’m not talking about the theme of the film.

Hey, I know you probably already forgot that the gun was in the drawer let me remind you by having one of my characters say it again in the second act.

Repeating information in dialogue is terrible for one reason.

It causes the story not to progress forward. Making the film seem slow.

Did you know that 93% of what we say is non-verbal?

Note something the character is doing. If its a heavy dialogue scene, it breaks up the monotony.

If it’s a love scene and one character is confessing to another. What is that person doing? Is their hand inching towards there’s? are they walking forward? Give us some visuals.

One note I got on the last script that I didn’t notice before is to “Avoid talking heads.”

If six people are sitting at the table and only two are talking, what is everyone else doing?

Are they fidgeting in their chair, on their phone, and so on.

This does a couple of things:

Remember to give one or two things and not to overdo it. You can come off as trying to direct.

So I recommend giving just a quick line of action. Something related to the story that the character would do anyway.

Also, this should be only done for dialogue-heavy scenes ranging to several pages.

6.) Avoid On the Nose Dialogue

What is on the nose dialogue?

The dialogue giving exact intentions of the character’s ideas and motives.

The whole story is on display for the audience. And doing this gives the audience leeway to jump ahead of your story.

Dialogue is supposed to be complementary to the actions of the character, like sprinkles on a cupcake.

A story is suppose to unfold.

Bringing me to my next point.

7.) Don’t use Dialogue to Tell What You can Show

In other words, “show don’t tell.“

You’ve probably heard this rule before but, what does it really mean?

Whatever you’re trying to say. If you can make by using the character’s actions instead of speech, you should do it.

Instead of having a character openly say they hate someone. Have that person show it by treating that person differently than they treat others.

Then, if you want you can have the words complement the action. But, not by explaining their hatred for the person.

What is subtext as is pertains to dialogue?

Subtext dialogue is the hidden meaning of what the words actually mean.

Why is this important?

Because people don’t actually speak their true intentions or meaning. And to mimic people in real life, you need to master this technique.

So how do you do this?

Let’s break it down.

Write out what you want the person to say.

There is nothing wrong with this statement. This is precisely what John wants to say and can work from time to time, but we want to be more subtle than this. But, for the first draft, sure this writing is fine.

Take out anything we can show in action.

Cut, cut, and cut it again.

I would even argue that you don’t need any dialogue during this example. His hand going up in the vote first seems to speak volumes by itself.

Whether it is through action or words, the subtext is vital.

9.) What Characters Say is More Important than How it Sounds

In this modern age, the pressure to make dialogue sound good is holding writers back from writing at all.

The notes I got from my last script was my characters and dialogue were excellent. I have never got this note before. I thought to myself, what did I do differently than before.

I wrote without judging myself and holding myself to some ridiculously high standard.

This tip if for all the writers who get stuck writing scripts because they want their dialogue to sound excellent or refreshing.

I was one of those people.

It’s something that just gets you to procrastinate.

The first pass of a draft should be your story and words on paper. It’s not supposed to be perfection. Treat it as such.

The second pass through, you can work on making it sound a certain way but not the first.

These specifically are words that make your dialogue not sound as powerful. When writing gets straight to the point.

No need to beat around the bush.

This is more of a guideline, not a rule. Occasionally using this language is fine, but to throw it in every line is screenplay destruction.

This type of filler dialogue is usually picked out by the actor to throw in if they feel like it’s necessary. Not something that you, the writer, should force them to say.

The only exception to this rule is if it’s the character’s personality to use this type of language often. Then ok, the producers and writers would understand.

If you’re a newer writer, these ten tips on improving dialogue in a screenplay might seem overwhelming, but if you have gotten feedback before, some of these might seem like a review.

It all depends on where you are in your journy.

Now It’s time to hear from you:

Is there anything I missed?

What tips surprised you and which ones did you already know?

I would love to hear you’re from you in the comments below.