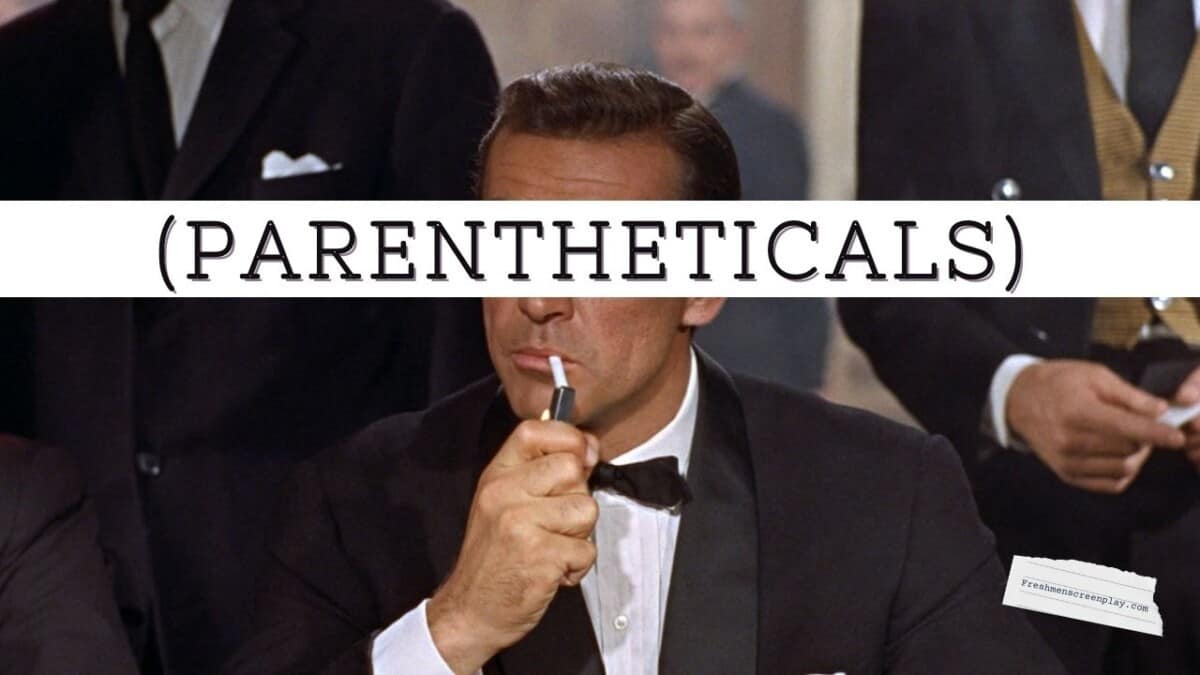 When I started writing scripts, I used parentheticals wrong all the time.

I didn’t understand their proper format, what they were really for, and how to use them right.

This post will go over parentheticals related to screenplays, giving you everything you need to know to carry your reader through your script correctly.

What is a Screenplay Parenthetical?

Sometimes it could be unclear through other means about a character’s reaction while speaking. This is where parentheticals come in. They clarify the way something’s done.

How do you Write a Parenthetical in a Screenplay?

From this example, you can tell that whatever John is talking about, he’s not too happy about it. And whoever hes talking to, they’re in trouble for something.

Because I added the “angry whisper,” you now hear the tone that the line’s delivered. Tone gives insight into how the character is feeling about the situation.

Without it, I would be unsure what John is feeling at this moment.

Can you write multiple parentheticals in the same dialogue? Of course, you can. Let’s use that same example above to illustrate.

The formating of a parenthetical is more about what you shouldn’t do than what you can. Below is a list of ways you should never write them.

Please keep it simple; this isn’t the area of a script where you show off.

What is the Purpose of a Dialogue Parenthetical?

Words are sometimes tricky; readers can interpret them differently from how writers want them to. One way to combat this is through parentheticals.

Parentheticals also help the reader to imagine the situation of the scene better. They can add flair boosting the emotion of any character on the page.

The example above is fine, and nothing is wrong with it. We understand that John is brushing off Sarah. Let’s add parentheticals to the mix.

The second example shows how John feels about Sarah’s words. That’s the power of parentheticals.

Every way to use Parentheticals in Screenwriting

Up to this point, we’ve been talking a lot about clarifying words in dialogue. The correct intent of the writer. But in this section, we will discuss how broad that means.

Below are Six ways to use Parentheticals in Screenwriting.

Character emotion is something I’ve talked about before. But parentheticals is an excellent quick way to give the reader insight into the character’s feelings.

When there are multiple people in a scene, it can be confusing who directly talks to who.

Using character actions in parentheticals are rarely done because most actions need to be in description lines. But from time to time, I do see a short piece of action.

This does shave off lines on a page; cutting down description will sometimes help the reader scroll faster.

What do I mean about continuing dialogue? When there is a break in dialogue because of action or writing action in the middle of dialogue.

The purpose is to let the reader know the character is still the one talking.

Beats and pauses are breaks in action or dialogue. Stopping your character from talking halfway to show shock, nervousness, or stuttering.

When a character is speaking a different language, but you’re going to continue to write in English, You can indicate this in a parenthetical.

The question you should ask yourself is: If I didn’t have this parenthetical, would the reader have any idea what I’m trying to say?

You will find that most times they aren’t needed at all. But if you do, it will give the lines the pop they need.

Please take a look at this video explaining what I mean.

Real short. one to three words is best. If your parenthetical is an entire sentence, you’re doing way too much. No producer is going to want to read all that.

If it’s already short, try to find ways to make it even shorter.

How Often should you use Parentheticals?

On average, parentheticals are used once per page. Meaning out of a 120-page script, you will have 120 parentheticals. This is a good measurement tool to stay under and not overuse this tool.

If you find yourself overusing them, that could mean your descriptions aren’t good enough.

Professional screenwriter Aron Sworkin uses 1.51 parentheticals per page, according to research by John august. And most of his scripts are dialogue.

So if you’re doing more than him, you need to check yourself.

Below are some examples from scripts and movies I enjoy.

I like the use of creativity here. “All but screaming,” tells you exactly how she’s delivering the line without directing the actors. Brilliant.

An example of how to switch languages in scripts through the use of parentheticals.

Great use of one here as it shows who is in power in the scene and how Jake responds to Mr. Plummer.

Okay, now we are finished with this subject. Everything you need to know about parentheticals. The when, how, why, and the what.

How have you seen them used that I didn’t discuss?

Screenplay Parentheticals: Everything You Need to Know
Posted in How to Guides By K.D.WilsonPosted on Tagged Parentheticals
Script Audio Notes