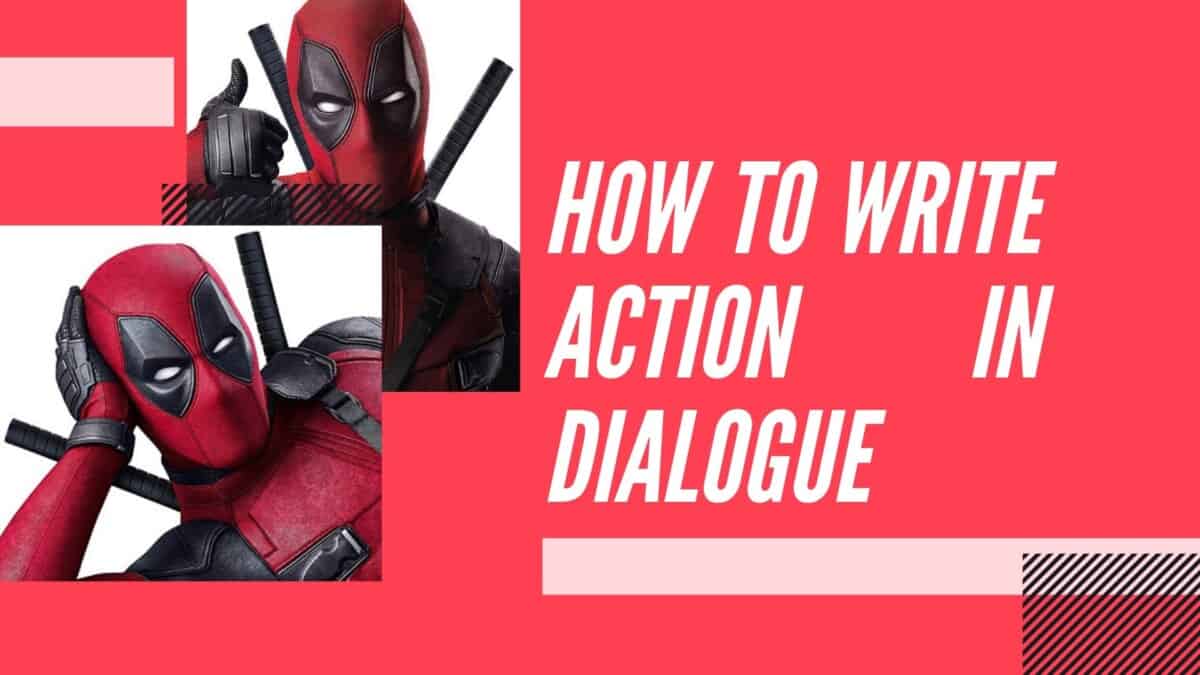 Writing action while dialogue is happening, makes your script more exciting, according to several professional screenwriters.

The most common way to answer that question is below.

Let’s look at the opening Deadpool scene where Deadpool, played by Ryan Reynolds, is fighting a group of armed men on a freeway in an SUV.

Now that you have your basic answer. And see from the video how its usually done.

There are more examples I can show you, like if you want every action to have a word attached. Or if the actions are quick.

Check those out below.

Different Ways of Writing Action in the middle of Dialogue

Yes, there are different ways of writing this. I’ve found three ways you can see seak in action while your character is speaking.

Parentheticals are like instruction typically under a character’s name that gives a reader a sense of how the character is feeling while speaking.

Now, I don’t recommend you use this way but if its a small one liner you might be able to get away with it.

The action of the character kicking the body is in the middle of the dialogue.

This method is used best for quick bits of action. Not precisely long strung out action scenes.

If you don’t have more action than dialogue, you might want to try writing it usually within the action line itself.

There is nothing wrong with this, and its best done if you have several actions to describe.

People will naturally imagine it’s all happening at the same time anyway.

3.) Action Every other Word

I’ve seen people on the internet, looking for a way to write action during every other word as if the actor is talking every punch.

This form reminds me of a 90’s action flick. But if you’re looking for this, I can show you how to do this as well.

It’s the same as the action lines version.

Why You Should Write Action in the Middle of Dialogue

There are a couple of practical reasons to take this approach to writing screenplays.

1.) Action during conversation is one of the best ways to give exposition.

It’s like hiding the candy in the Koolaid if you will. It is making your exposition more visual.

They talk about this in uncut gyms. When everyone is in the shop there’s so much movement but they are feeding you things you need to know at the same time.

2.) It also adds excitement to your dialogue.

Not everyone is Tarantino.

He has a way with words and a way with casting. To write great dialogue is one thing, but to cast great people to execute is another.

Since not all of us can pick A level actors for our films, our best bet is making the script itself seem as A level as possible.

Like my script mentor says Its a way to avoid the dreaded talking heads.

In this post, you learned every way possible to write action during dialogue in a script. Its pretty simple, but I can understand how it can seem like it’s not.

Everything when it comes to script formatting seems a little elusive at times.

Did I answer your question fully?

What method are you going to use? Either way, let me hear about it in the comments below.