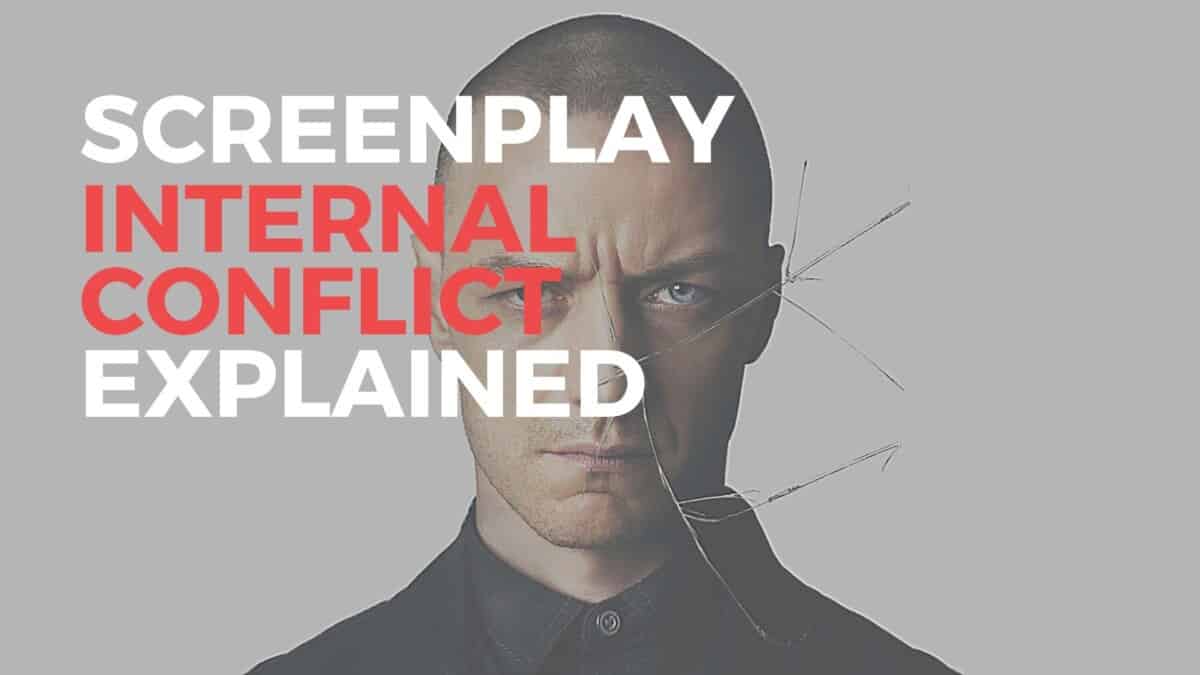 When I first started writing, I heard a lot of professionals say.

So I went down the rabbit hole and found two types, external and internal conflict.

In this post, you will learn everything about the conflict inside of characters.

I wrote this post because one was a mystery for me. I thought it wasn’t easy to understand, and that it had to be in every scene.

The real answers will SHOCK you.

But first, let’s define it.

What is Internal Conflict in Screenwriting?

What is internal conflict? Internal conflict is when a character is fighting or torn by something he or she doesn’t want to do, believe, or admit to themselves and others.

It happens all inside the character’s head. It’s a feeling they give off whenever a subject comes up.

We all have internal conflicts. They’re not hard to find.

I personally, for a long time, have had insecurity about my intelligence.

I felt that I was a dumb kid.

When I was little whenever people would bring up anything academic, I would shy away from the conversation.

This example is an internal conflict because it has nothing to do with others. It’s a problem I have with myself. Maybe family and friends didn’t help it, but it was my issue alone.

Alright, how does this relate to screenwriting?

Most good characters have some internal conflict.

And this brings me to my next point.

What’s the Purpose of Internal Conflict

Relatability is huge in screenwriting. The audience must relate to something within the character. If not, we don’t care.

Have you ever watched a film and turned the channel or scrolled through your social media feed while it was on.

One of the problems is the characters didn’t catch you as they should have.

Most people can see themselves in there favorite movie characters.

Well, rounded characters have layers to them—one way to create layers to have an internal conflict.

It’s a way to create depth of a character without focusing on building depth.

Tips on Incorporating Internal Conflict in a Script

Knowing what it is and the purpose of it isn’t enough. So within this post, I wrote a little mini-guide on how to use it today.

Below are six ways of how to incorporate internal conflict in your script.

Think of these and see how your characters fit.

When a character does something because of people or society’s expectations of them to do it.

Think of a woman having a child just because others in her life except her too.

When someone has to do something, but they’re afraid of the result of the action.

A man who has to kill his best friend.

Someone who has to fight against what they believe about the world.

A heavily devote Cristian who falls in love with a Muslim.

A person who wants something even if it means sacrificing what’s important.

Someone who wants to be excepted by a new group of friends even if it means losing her best friend.

A person who has to choose between their lover to survive or their friends.

Someone who wants to something but is just as afraid of the criticism of going for it.

A person who likes a particular activity but won’t do it in front of others because of what they might say.

When a character feels that they have to do something because of some sort of status, they hold like a job position in society.

A character is working late and missing there spouse’s birthday.

Or should I say guidelines because in screenwriting these change? But for now, in 2020-2021, most new writers should stick to these rules for writing internal conflict.

What does this mean? Reactions from characters are something that should be left up to the actor. Most producers see writers giving exact reaction tips in the parenthetical or action line.

This is considered directing on the page. And most producers will think you’re an armature for writing it.

It’s like micromanaging at your job, which no one likes. The director and the actors will look at that and say:

“So, the writer is just going to do everything?”

2.) Never write exposition do it visually

Most new writers, when trying to write internal conflict, will have the characters say it out loud.

Making your characters speak their internal conflict out loud isn’t the best method. It’s also a sign of an amateur writer.

For more examples on how to do this visually, check out my article on visual screenwriting.

Split is a movie where the central conflict is internal—one man with twenty-three personalities living in his body—each fighting for control.

A favorite fan film about a man who is tired of his routine. Job and starts a fight club. The movie twist and turns to find out that the conflict of the main character isn’t with Tyler Durden. It’s with himself.

A man with a disorder. When he runs out of medicine, his hatred for his cities situation turns him mad.

Now let’s look at all three examples above. What do they all have in common?

They all include characters with some type of disorder.

That’s one of the ways you can have internal conflict as the number one issue in your script by putting it into the spotlight.

But there are movies where the conflict doesn’t mean the person is crazy.

Let’s shoot for one more.

A new college student is excepted by one of the top music schools in the country. He will give up anything for the number one drumming spot girls, friends, family.

The inner conflict comes from him trying to become the best. But this doesn’t take hold of the story. It’s there to support the characters, but it doesn’t make them.

Why you should Never Focus on Internal Conflict

Yes, even with all this said, I personally think you shouldn’t focus on it. It seems counter-intuitive, I know. I just spend 2,000 words telling you how and why it’s important.

But hear me out.

I’ve determined three reasons you shouldn’t focus on it.

1.) Complex characters are a myth

Most writers, even me early on, wanted to make sure my characters were complex. So they try to use internal conflict as a way to do so.

They have to be wrapped up in a lot of things with a lot of motivations to be considered good characters we tell ourselves.

Far from the truth.

Most, if not all, characters have one want, and one main obstacle and the internal conflict comes second.

Most stories I’ve seen have had an internal conflict come naturally. To make sure this is happening, write stories you are familiar with, such as your story.

Using people in your life as a model for the characters you create makes your characters more natural and well rounded, and you will naturally use conflict.

Internal conflict, most of the time, shouldn’t drive your story.

An excellent example of this is Secret Window Staring Jonny Depp.

The whole movie was about his internal conflict with himself. This can sometimes work mostly for single-character films. Or scripts where one main character is primarily alone.

But if your writing the next Fast and furious movie. The internal conflict isn’t everything, especially when you have the government after you.

You now have the keys to the castle when it comes to conflict inside characters.

If you remember anything from this post, remember this.

Internal conflict is earier to write when you base it off of someone you know in real life.

It comes naturally writing someone you already know.

What part of this post helped you understand the most?

What do you still not understand about this topic?

Whatever your answer is, let’s talk about it int he comments below.

2 thoughts on “Screenplay Internal Conflict: Everything you need to know Guaranteed”