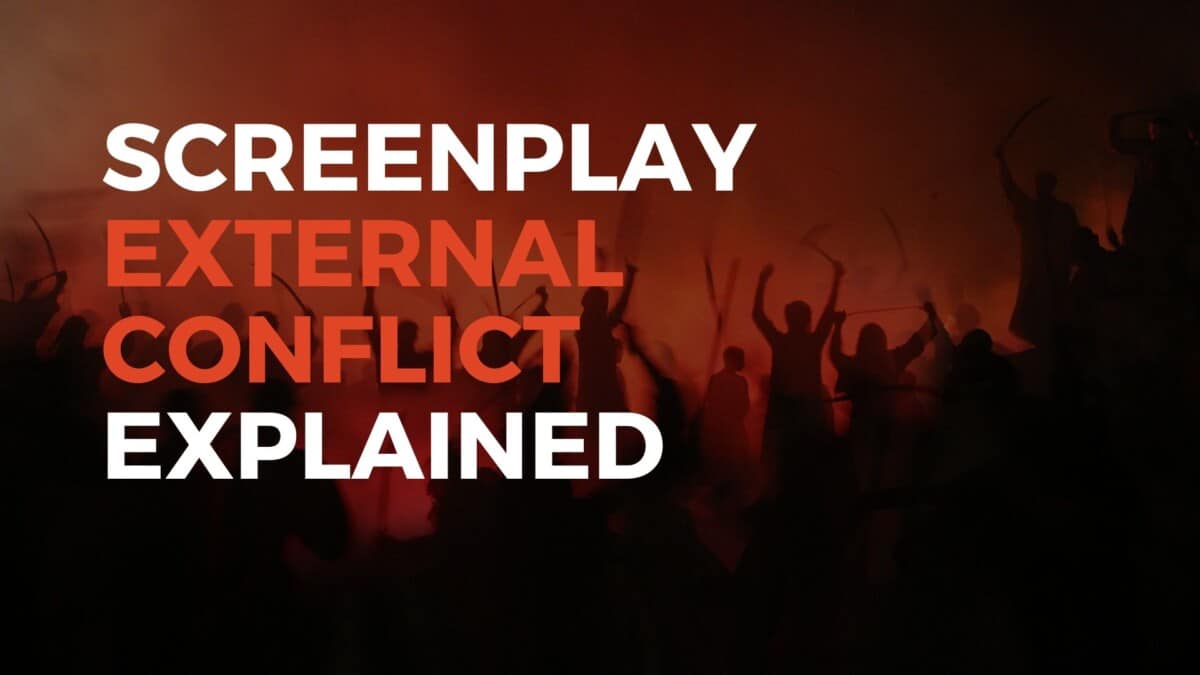 In this post, you will learn the basics of external conflict.

And in the end, you will understand everything you need to know to move towards internal conflict, which is the next step.

But first, let’s define it.

What is External Conflict in Screenwriting?

Nothing more, nothing less

You can find external conflict in every single story, and it’s what drives most movies.

But how do you do it for yourself?

How to incorporate External conflict in Screenwriting

The best way to include this type of conflict in a script is to imagine the obstacles in your character’s way.

Imagine a character who wants a better job, but his coworker, who is also gunning for it.

The external conflict for your main character then becomes his feud with his coworker.

But how many types of external conflicts are there?

Below we have listed a couple of ways to use it in your script.

Character vs. character is the most popular and common one and the easiest to recognize all of them.

Introducing the thought of scarcity will make this type of external conflict pop off the page, like adding a time restraint to obtain the goal.

Nature doesn’t seem like a considerable adversary, but if you tie in the elements, it can be.

Your character’s conflict is with the world and not a physical person.

Society type conflict can also be internal conflict, but if positioned right, it can work externally as well.

Think of anything in the current society that isn’t the norm.

A good example is a movie, the 40-year-old virgin.

Anyone who is 40 plus and is still a virgin not by choice isn’t smiled upon by most people. We think well, what’s wrong with that person?

Think whats out of the norm and how people will react to hearing it. If going against it would scare or outrage people yours on the right track.

Robots is the first thing that probably came to your mind, right?

But think of any tech, including AI or UFOs.

Tech is becoming a more significant part of our lives, so its only natural that we eventually have problems with it.

Animals usually go hand and hand with nature but not entirely.

Animals have, for a long time, seen as a threat to our existence not as much now we won but thought of ways you can give the animal back there power.

I’ve already given you some examples of movies above, but now let’s go deeper into the conflict.

Below are two of my favorite movies to analyze.

A new college student is excepted by one of the top music schools in the country. He will give up anything for the number one drumming spot girls, friends, family.

This film has three mains points of external conflict.

The first two are character vs. character.

The music teacher played by J.K Simmons. His conflict comes in when he is seen as the person who controls which player gets the first chair, in other words, who gets to shine during the concerts.

The second character vs. character conflict comes in when he fights the lead drummer for his spot.

The last external conflict in this movie is character vs. society.

You can see most of this when he quarrels with his family and girlfriend over the opportunity to be the best drummer in the school.

Lion King is an excellent example of external conflict in a Disney movie.

It has points of conflict spanning though the entire film over all the acts.

Scar wanted to be king but wasn’t strong enough to take the right way, so he used his head to win the crown.

Scar wanted to keep control of the pride land, and Simba wanted it back to rescue his family.

When Simba was cast out of the kingdom, he almost died walking in the jungle.

Simba vs. his rightful place as king

Lala argued with Simba on what he must do and the issues his family is going through without him. Simba didn’t want to go because he built a new life.

Now that you’ve seen how external conflict is used in films let’s show you why its the most important form of conflict.

Why you should focus on External Conflict

External conflict should be the first type of conflict to focus on and the one you build your screenplay from.

Because it translates on camera the best, and it’s easily understandable and recognizable.

Think about it: why do we watch most movies?

Is it because of the internal growth between the characters? Not really, we only appreciate that after we’ve watched it.

Whats in every trailer of every film?

External conflict. Its the selling point of every story.

So your script should be driven by external conflicts because it’s the most recognizable on-screen.

Now we are at the finish line.

Today you learned one of the basics of story structure.

If you’re new to this, it might take some time but keep writing. We’ve all been there.

If you remember one thing from this script, you should remember External conflict should be the driving force to your story.

How does reading this information change your perspective on conflict?

Whatever your answer is, let’s talk about it in the comments.

One thought on “External Conflict in Screenwriting: Everything You Must Know”