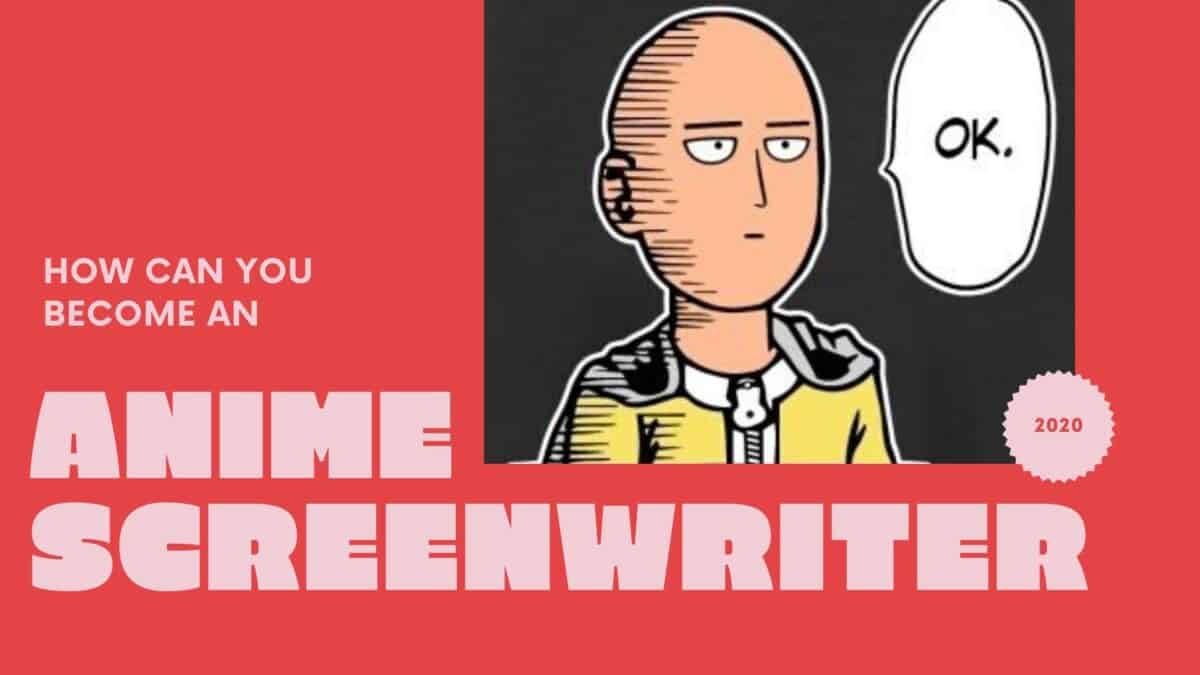 So you want to become an anime screenwriter?

Creating the next Akira, One Punch Man or Your Name.

I actually live in Japan now, really close to Tokyo, and did some digging.

How long the process takes for your anime script to be created is a long one. About two to four years long.

Think of your manga as the outline for your anime. Most animation companies in 2020 don’t create stories based on original stories, aka screenplays.

So if you’re writing an anime script for fun in this post, I will show you the technical parts of scriptwriting, but if you want to write something that will get made, this article is for you.

But what if you do want to go from script to screen?

What if you can’t draw?

All those questions and the history of anime screenwriting is broken up below.

The Differences between Anime and Film Scripts

What’s the difference between anime and film screenwriting?

Almost NOTHING! But the language and the cultural approach.

Take a look at the following image that shows the similarities between the two.

The scene descriptions, dialogue, and action lines are virtually the same.

If you can write and read in Japanese. Amazing.

If not, just hire. script translator. Can you find them on Fiverr easy enough, right?

If you need help writing a script in general, take a look at my post here. I go in-depth about talking your story from the idea phase to a screenplay.

The Cultural Difference is Important.

Can we all agree that Japan is exceptionally different from other first world countries?

The country is 95% Japanese.

What does this mean for your anime screenplay?

To write an anime script that will be excepted by production companies, you need to write a script accepted and understood by Japanese society.

Anime, whether written in English or Japanese, needs to have a particular style to it.

All the mannerisms, problems, and colloquial’s in everyday Japanese society will need to be penetrated deep within the story.

The following is a voice acting script from an anime.

In a typical screenplay, you would never write what is called filler language.

But in an anime writing fillers occasionally is totally ok.

A Japanese born woman thinks differently than an American born woman. Trust me; I know first hand. Everything is different.

Knowing this would have to be critical.

The solution is to watch and read much Japanese material as possible. And not just anime, but magazines, blogs, anything you can find. Or just live here. That would be the best solution.

I have a loft you can use…Just kidding.

Can I Write an Anime Script without Drawing?

It’s bad enough that you’re a foreigner looking to break into a prominently Japanese practice. Now you can’t draw. And please tell me you speak Japanese?

Like I expressed earlier, the manga is the blueprint of which the anime is based. Coming without that ability to draw makes it that much harder.

Even with that, 93% of all manga doesn’t have a typewritten script. Maybe a few writers who work with artists but that’s about it. Most of it comes from one person who draws and writes.

It’s probably better to hire a manga artist. Yes, it’s going to cost thousands, but at least you will have a manga to go with your script.

Usually, first comes the manga. And if it’s good enough, it’s published in a Japanese magazine. After that, animation studios will call you up.

The publisher represents social proof that your story is popular enough for animation.

But there is hope.

Have you heard of Mari Okada?

She is a anime writer with no background in Art.

So it is possible to do, but you have to take into account her history with the medium before she got in this unique position.

But what if I can kinda draw?

You’re probably familiar with One the creator of One Punch Man.

His drawings are not the best quality.

But his idea fit his style.

But the essential part of his story is he got a massive following. Over 100,000 hits day on his webcomic.

From there he was published in the Weekly Shonen Sunday.

Build it and they will come.

Where to find Anime Screenplays?

But I have found some transcripts of anime in story format.

Click here for a light novel written by Your Names director Makoto Shinkai.

The Process of Anime Screenwriting

There are only 56 official working anime screenwriters in Japan today. And they are all Japanese.

Even with that small number of anime writers, they are just as important. Most writers today are uncredited.

The process works by having the production team sit in a room and discuss the story for an episode or a film. Then one writer would go to write the discussion version.

Three weeks later, the writer will present a script.

After looking it over, the production staff would fine toon the script even more. The writer again goes back to adjust.

Meetings would continue for about four to five times until everyone agrees.

It’s not abnormal for a series to have multiple writers, having different episodes written by different people on the team.

From what I was able to gather. Yes, a while ago, original anime was produced mostly from stories.

But it wasn’t the best job.

Most of the writers would be housewives or field workers with a little spare time.

They weren’t even called scripts or screenplays they were referred to as a scenario which is the literal translation.

And if your scenario was purchased, it still might not even be made, and if it were like today, it would be to four years before it was seen.

And when it was, it was ordinarily different from the written version.

Okay people. I have you the good, the bad and the ugly.

But if you weren’t deterred from this post, there is good news. It means you will stand a chance.

Not all of these need to be done but the more you do the better your chances are.

Either that or write it and get a scene from your script animated by paying for It yourself, if it gets popular, and you can gain a following that will attract animation companies.

Remember the anime industry is like a business like all others. So if you show that you can bring eyeballs to your work, they will work with you.

Only then will you have a chance to sit inside a production meeting room and talk about your script.

What did you learn from this that you didn’t know before?

Are you writing an anime screenplay for fun?

Whatever your answers are let’s talk about them in the comments below.