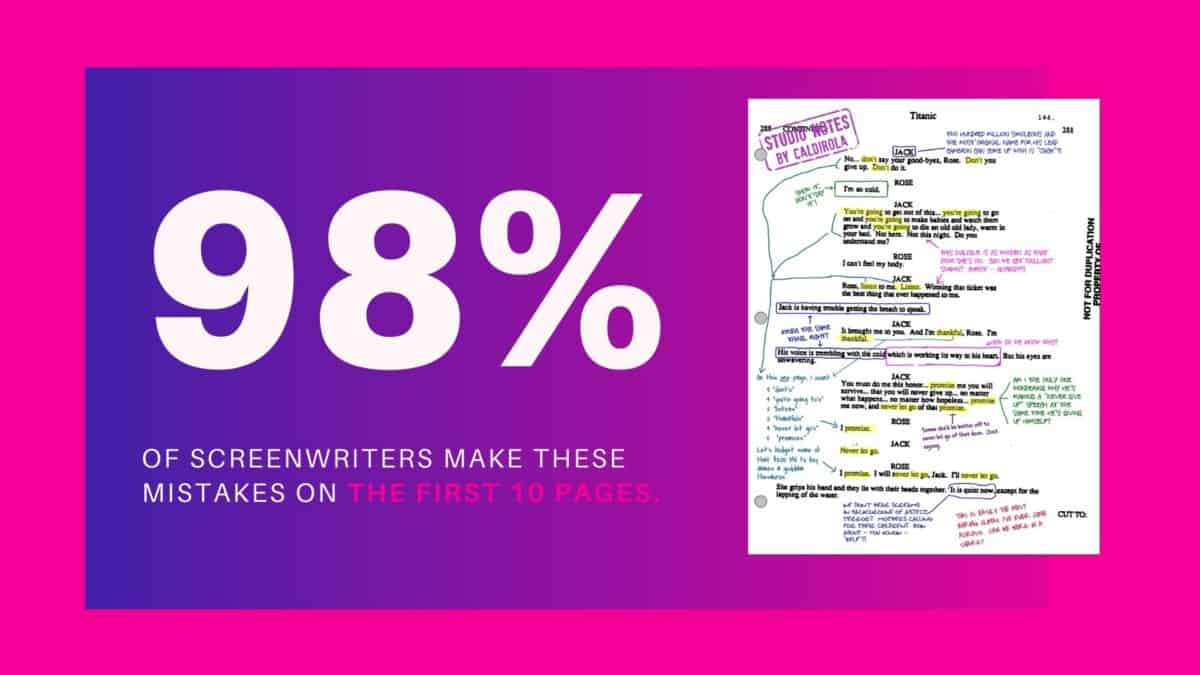 Most newbie screenwriters have one problem.

One problem stopping them from getting that professional job.

It’s that the first ten pages of their screenplay are BORING!

You think it’s intresting, but you aren’t the producer with the money.

Trust me; I’ve made this mistake.

In this post, I will layout the 10 rules for the first ten pages of every single screenplay. Following them will put you above 98% of every screenplay out there.

I recently had an interview with professional screenwriter Mark Sanderson to talk about some of the issues. Listen to what he says.

This tip is obvious, right?

Well, not really to some.

Some people want to hold off on the main character interesting for some reason.

They think it’s cinematic to hide who we are really following and couldn’t be farther from the truth.

But out of all the award-winning scripts, none of them have done this.

The sooner the protagonist is revealed, the better.

Doing so provides some positive benefits for the reader.

The main one is they can connect with the hero sooner than later.

When writing characters, we need to feel for them. We need to understand them or at least their situation.

When you watch the movie The Matrix after you meet the character Neo.

They make you feel his position.

Most people have shown up late to work a time or two.

It’s a very relatable situation. We all feel for Neo in that one minute. Did I mention it’s only one minute? They were able to take a character and make him relatable to everyone within one minute.

One minute screentime is one page—ruffly speaking.

Think of the one thing that makes your character just like everyone else. Use it to your advantage.

What if your character isn’t likable?

We, at least, need to understand the characters.

Is this downtown Brooklyn?

Showing the world the story lives in is always necessary even if you are not writing the next Terminator, Avatar, or Pixar film.

So if you’re not writing a SIFY film, why would it matter? It’s the world we already live in, right?

Think of it as a different character’s perspective on the world we live in.

Everyone sees a different reality, even if we are walking down the same street.

A good example of this is the movie, Juno.

The main character lives in the same world we do. But as a pregnant teen, the things that happen look very different though her eyes.

Another good example is Get out.

A black man dating a white woman comes with issues most of America doesn’t see. Therefore the world view is different.

One thing to mention is the introduction of the world doesn’t have to happen in three sentences. It can happen over the actions and situations the character is placed in.

If it’s a more “out of this world view” like a Batman script, then yea gives us a base. But then explain it with situations further.

Normal to the character and their daily life.

What does a typical day look like before the start of the inciting incident?

But it doesn’t have to be a day. It can be a scene like in The Matrix scene above.

I call it life before the change.

In the famed film pulp fiction, we see the two hired guns. Jules and Vincent talk about a trip to another country. They just casually talk as they arm themselves with handguns from the backseat.

Killing is routine for them, killing people. So why wouldn’t they talk any differently?

Once you finish, then your story can make the turn.

The sooner conflict’s shown, the better it is for the reader.

If you haven’t noticed, all movies are is essentially a story that has the main character wanting something, and something or someone else stops them from achieving it.

You can’t name one movie without it. And if you can, the film is probably bad.

Without conflict, your story is boring. Yes, it’s essential to give us a visuall location, but what’s equally important is the juicy drama we feel reading.

So what I do is open with conflict on the first page. If I can’t, I make sure I start some sort of conflict by page two.

If I can’t do that, then I don’t write the script. Period

It could be the inciting incident. Or it could come earlier or later, but it has to occur.

The dramatic question is one tip that doesn’t have to be in the first ten pages, but it can be.

It at least has to happen before the first act‘s finished, so It’s not essential to have on the first ten pages.

But what does have to happen are questions.

Questions about the story after each scene or each page. Questions make readers curious, and that stops them from putting down your script. When you put the gas pedal down, never let go.

Take a look at the first page of a script that took Hollywood by storm.

What questions do you have after reading this page?

Do you see how curious someone is about flipping to the next page? That’s what you must do—every single scene.

Listen to professional screenwriter Corey Mandell talk about it.

Write within a genre.

Whether you’re writing a comedy, horror, Sify, or western.

If your writing a comedy you open with a joke. If you’re writing a western, you can start on a dirt road.

Don’t think you don’t have any creativity, but you have to indicate what type of movie we are reading.

A producer works in genres, and so you do too.

Genre isn’t something you establish over one sentence; it’s woven within to the entire script. Make sure you have an indication of the genre for the first ten pages of your screenplay.

Going back to our Matrix example, it’s an action film. So how does the film start?

Did you notice the writers followed every tip I had so far? It’s not an accident, people.

I’m talking about a specific format for new writers.

Most writers think they can do whatever they want. I was one, and I got my script handed back to me. Embarrassing.

So what is the format?

For every writer who isn’t being paid to write. You have to write a spec script. That’s the only format you need to worry about.

A lot of newer writers are writing shooting scripts. Which have things like camera direction, shots, opening credits, minute details like “we see” or “we hear.”

A spec script has none of those things.

You are instead of letting the reader imagine most of those things while your words guide them.

This video explains it perfectly.

Now even with that, there are still some things you need to know.

Things that will make you look amateurish in your screenwriting.

Never do any of the following unless it’s absolutely necessary and even then think twice.

Any of these mistakes will have any producer count you out instantly.

The theme is another one that needs to be introduced sooner than later but can stretch out over several pages.

What is your script truly about? What’s the overall message you’re trying to send?

Think of a one-sentence statement or one word that your script will focus on and never let go.

Let’s go back to our example movie The Matrix.

What is the matrix theme?

The whole first movie and trilogy they were trying to become free from the machines. In the first ten pages, Neo was no free, and the other characters needed to convince him of such.

Ask Yourself what them does your script have and set it up in the first ten pages of your script.

Show don’t tell means to have your character’s actions show what they really care about and have their words support their actions.

Let’s imagine a character wants to win first place in a race.

Don’t have them say to there best freind:

Thats just bad writing. Instead show in the characters action.

Have them wake up at five am to go to the track. Have them blow off their friends to run extra laps at night.

Making a character flat out say exactly what they want is boring.

It stops the questions running through their head.

Sometimes it’s fine for a character to speak in existence what they want, but if you want your script to stay interesting, it’s better to hold off.

Ok people, I know its a lot but don’t get discouraged I’ve been there.

One tip I noticed about all these are they can all accomplished at the same time.

What I mean is you can show theme genre and conflict in one description. Don’t try to spend each page displaying each tip. They should work in sync together like a spider’s web.

What are you missing from your first ten pages?

What would make your first pages of your script better?

Whatever your answer is, let me know in the comments below.