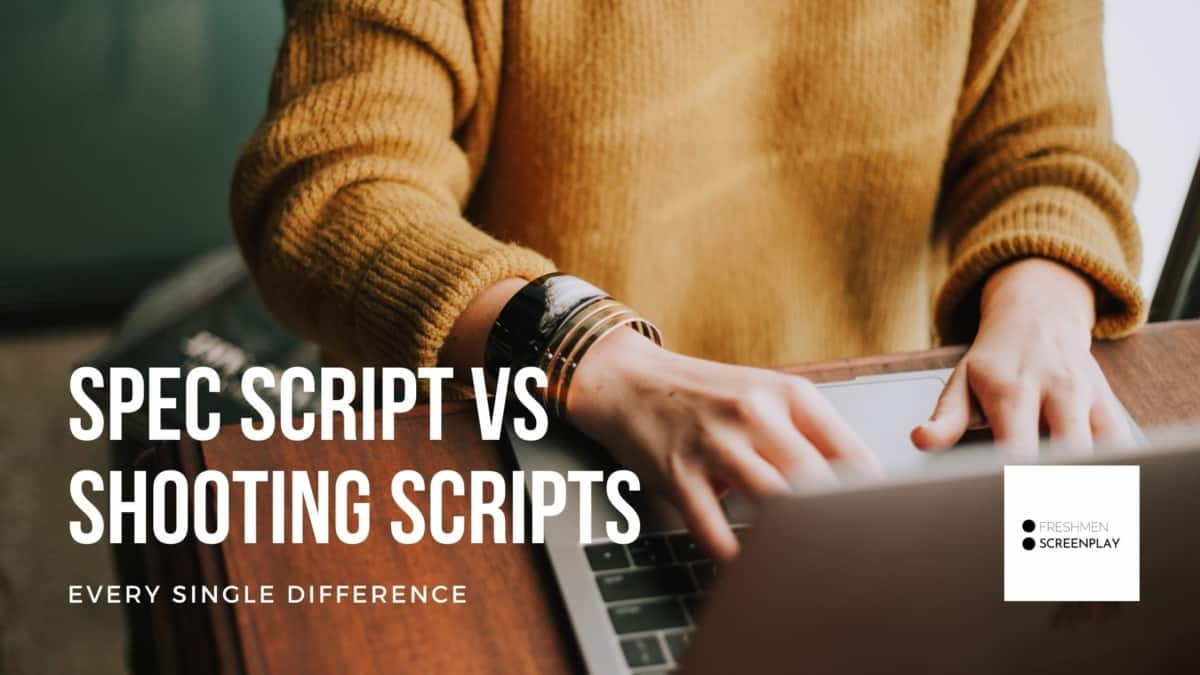 There are two different types of screenplays: spec scripts and shooting scripts. As a screenwriter, you’ll typically be writing in the spec script format.

In this article, we’ll review every single difference between spec scripts and shooting scripts, helping you understand how to format the screenplays you write in the appropriate format.

The Main Difference Between a Spec and Shooting Script

The “spec” in “spec script” is short for the word “speculation,” referencing the fact that the screenwriter wrote it for free without a contract in place in the hope that it will be sold, win a contest, or otherwise help them break into the film industry.

As such, a spec script hasn’t been picked up for production, which means that even if it does get made, it will usually see many, many changes before it gets optioned and (hopefully) eventually shot and turned into a film.

A shooting script is a version of a screenplay that has been locked and approved to be filmed for a production. In a shooting script, the scene and page numbers need to remain the same even as other things changes, as it must stay consistent while it’s being worked on by the various departments to be prepared for production.

Now read on to find out all the differences.

The first thing you’ll see that is different in a spec script and shooting script is the title page. A spec script’s title page will have the film’s title, the name(s) of its writer(s), and contact information for the writer or their agent.

In contrast, a shooting script might also have the names of other writers who have worked on the script, contact information of the studio, production company, or producer(s), copyright information, and version numbers or draft and revision dates.

Perhaps one of the most key differences between spec scripts and shooting scripts – the one that will immediately cue you (and readers) to understand which type of script they’re looking at – is scene numbers.

Spec scripts do not have scene numbers. Shooting scripts do.

As I mentioned above, one of the most important things in a shooting script is that the page numbers and scene numbers stay consistent even as other things change.

So even when a scene is removed, the numbers of the other scenes won’t change. And if a scene is added, it’s given a letter to help differentiate it from the previous scene (i.e., 15A after scene 15 and before scene 16) instead of taking the number of a different scene.

In a spec script, you won’t find any references to opening credits or title sequences. As a spec scriptwriter, it is not up to you to make these types of decisions, and it will stand out as an amateur move if you do include them.

However, a shooting script can refer to the planned title sequences and credit shots.

Like I said before, the page numbers of a shooting script must stay consistent throughout different versions of the script.

So let’s say you need to take out half a page of dialogue from a scene. This would move the rest of the script up in a spec script, and the page numbers would change accordingly.

This is why when you read screenplays online; you’ll often find a page with nearly no text on it. This is a sign that the script you are reading was a shooting script.

In fact, most of the time, the screenplays you find online for your favorite films will be in shooting script format. This is why it’s important not to copy the format of these screenplays when you’re writing spec scripts.

And one of the most controversial things you can do as a spec scriptwriter includes camera directions in your spec script.

The general agreed-upon rule is that spec scripts should not have camera directions in them. This is because it is frowned upon as stepping on the toes of the director and DP of the actual film to be made.

In contrast, shooting scripts are allowed to – and do have – camera directions in them, as the shooting script is meant to serve as a guide to all of the production departments for how they will make the movie.

That being said, there is a reason why this is a controversial topic and not an all-out, one hundred percent golden rule. Because some screenwriters do use camera directions in their spec scripts, and you will even find some screenwriting experts claim that they don’t have a problem with this.

The truth is that writers like Quentin Tarantino and Vince Gilligan can get away with breaking the typical rules of screenwriting because, well, they’re Quentin Tarantino and Vince Gilligan. They know how to write a script that will excite and entice readers, and they do it in their own way. Plus, they already have household names and established careers.

As a starting screenwriter with no reputation, however, it’s best not to take any chances when you’re trying to build a name and career for yourself. If there is a chance that an agent or producer will be turned off when reading your script because you made the controversial choice to include camera directions, that is a risk you’re probably not going to want to take.

Transitions are another big one that seems to be a huge difference.

Spec scripts have little to no transitions, and shooting scripts tend to be filled with plenty.

And many more. Like said earlier, it’s a document for everyone. And this includes the editor.

7. The Purpose of your Script

In addition to these more technical elements, it’s important to understand the difference in how you should approach a spec script versus a shooting script.

The key question here is:

“What is the purpose of the script you are writing?”

Generally speaking, the possible purposes of a spec script include:

In contrast, the purposes of a shooting script are to:

With this in mind, it’s important to understand that a spec script should be written for its readers, who are most likely to be agents and producers. It should intrigue them, entertain them, and make them want to move forward with the script as a film or with you as a writer.

While it’s still a highly technical document with very particular specifications, it is an opportunity to tell your story, show your voice as a writer, and really excel at your craft.

As a screenwriter, several reasons why it’s important to learn the differences between spec scripts and shooting scripts.

First, if you want to appear professional and like you know what you’re doing, you’ll want to make sure that the scripts that you submit to agents, contests, and production companies are written in the correct format. Otherwise, it might appear like you’re an inexperienced amateur.

Additionally, as a screenwriter, you’re likely (hopefully) going to be reading lots of screenplays to help you improve your craft. As you do so, you might notice that some look different from others and may even find yourself confused by the formatting.

Understanding the differences between a spec script and a shooting script will help you make sense of the screenplays you are reading and assure that you won’t unintentionally copy formatting that is inappropriate for the type of script you are writing.

Finally, if you are lucky enough to have a script picked up for production and are kept on to make edits throughout the shooting process, you must understand how a shooting script works and how to make changes to one.

So now that you know why it matters, you learn the differences between spec scripts and shooting scripts.

As important as it is for a screenwriter to understand the differences between spec scripts and shooting scripts thoroughly, don’t get too confused or worried by the minutiae. You don’t have to memorize all of these differences. If you ever need to, you can go back and reference this article.

The most important thing to know is that all screenplays – spec and shooting alike – must be interesting, succinct, and well-written. As a screenwriter, focus first and foremost on writing a good story.

Do you prefer to read scripts in spec or shooting format?