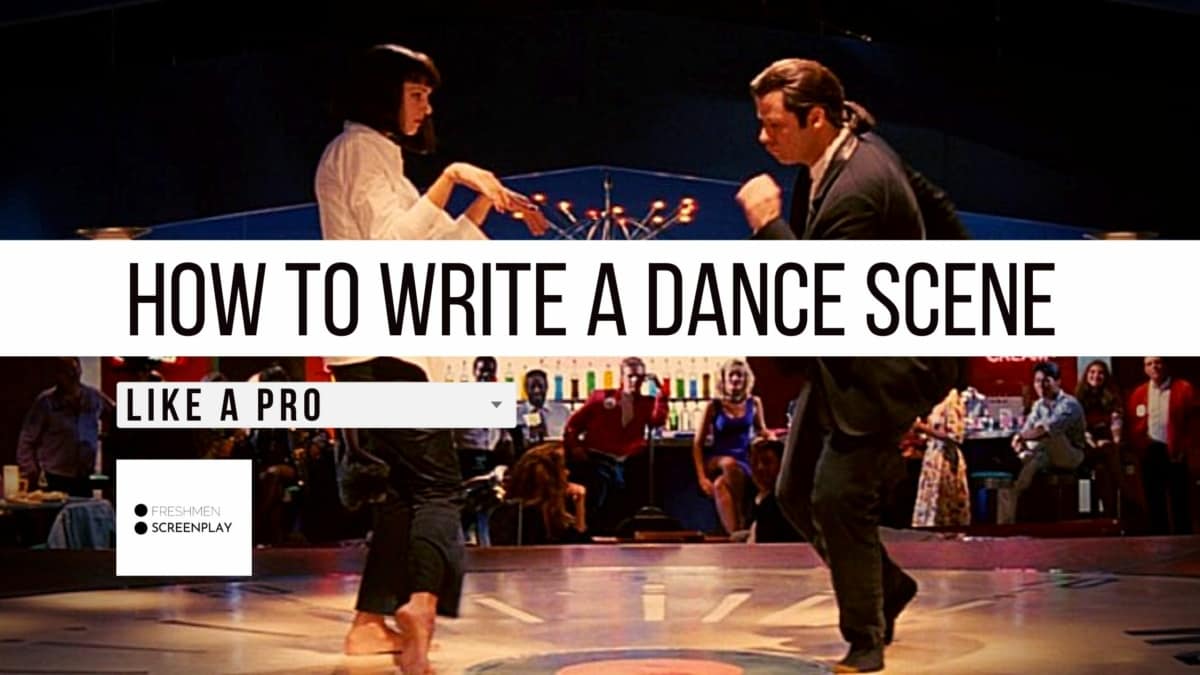 So you don’t know how to write a dance scene? The words to use, the actions to describe. It can be challenging. What’s too much? What’s too little?

This post will give eight tips on writing dance scenes in a screenplay that most people miss and give actual dance scene examples from scripts accompanied by the movie scene.

So you can write your next dance scene, whether that be:

1.) Know the Dance Style and Tell the Reader

This first tip will break the show don’t tell rule, but in specific scenarios, it’s justified.

Whether it’s a classical ballet dance or a tap dance.

Saying what type of dance we are about to read on the page is the best way to describe it. It doesn’t matter how you tell them as long as it’s in there.

It’s best towards the beginning, especially if the movie isn’t about a dancer and this is a one-off scene. You have to let the reader know what type of dance is happening.

Naming, the dance in the opening, helps the reader imagine what the setting looks like and how slow or fast the dance is happening.

We will get in some great ways to describe it, but you must first understand, what you say is more important than how you say it.

This tip always stops people in their tracks. But yes, dance scenes are written short and not that descriptive.

In my research, every single written dance scene is shorter than the actual movie version. Generally, for every one page in a script, it equals one minute on the screen. But for most scenes with motion, like dance scenes, action scenes, fight scenes.

Screenplays are just a blueprint for a film, so when writing, remember naming every twirl, flip, or spin isn’t just not needed it’s arguably considered bad writing.

How short are we talking?

Even in a musical, The entire four-minute scene is written in half a page.

4.) Describe the Whole Emotion, not the Entire Dance

When writing a dance scene, you want to give a feeling. This feeling should reflect the tone at the moment.

What are the expressions and emotions your character gives off while dancing? These words are far more valuable in a dance scene than the actual move itself.

There are no dance descriptions even written just about the emotion the protagonist is feeling.

But what dance moves do you describe? Keep reading.

3.) Only Describe the Essential Dance Moments

The broad strokes of a dance or the most crucial moment.

If you watch movies, every dance scene has one. And if you read the screenplays, the writer usually writes only that part.

How do you describe dance in words? Don’t use dance terminology unless your writing about some Olympic or sporting event. Or if the term is being used in dialogue.

We can talk about what you don’t do because there aren’t firm rules on what you should do when it comes to creativity.

But generally use words that paint a picture. The image you give with your words is all that matters.

Think about it everyone jumps basketball players, kids on the playground. But “floating” paints a picture of grace I can see. It’s specific to a ballerina or contemporary dance.

I’m trying to describe dancing in a club or a Rave.

Since we are trying not to bore the reader with too many details, we have to paint an image with the words we know. Think what type of jump it was? Basic terms will not work when describing a dance. You have to think harder than that.

Dialogue is a great way to break up any action, including dance. It stops your dance scene from being two-wordy and keeps the reader engaged.

I think about the Mr. and misses smith dance scene. This scene is quite long, but what keeps it intresting is the antiques and wordplay from both assassins trying to get the upper hand during the dance.

6.) Know the Steaks of the Dance Scene

Who wins or loses.

Not purely speaking from a competition sense but ask yourself:

The actions your character takes during the dance scene speak volumes.

Just like the Mr. and Mrs. Smith example above, we can tell by the conversation they don’t trust each other, but by the end, we find out that maybe in their marriage, real feelings were involved.

Find out the steaks of the scene, who wins and who loses based on the result of the scene.

If you noticed, this isn’t much of a Dance scene thing but how to write a scene in general because every scene must have these things.

This brings me to my second to the last point.

7.) What do we Discover as a Result of the Dance Scene?

There has to be an end goal of discovery. If not, it doesn’t matter how amazing your wordplay is or your character’s actions.

By looking at your story from a birds-eye view, a skilled reader will know you have no idea what you’re doing.

Sound is just as big a part of a dance scene as the physical movement is, so don’t hesitate to engage more of the readers’ senses by referencing the sounds that the viewer will hear in the scene, such as the music or, like in this scene from Black Swan, the way that the music ends.

What not to do when writing dance scenes just as much as what to do.

How have you seen dance scenes written in screenplays?

How to write a Professional Dance Scene (Tips and Examples)
Posted in How to Guides By D.K.WilsonPosted on July 11, 2021July 13, 2021Tagged dance scene