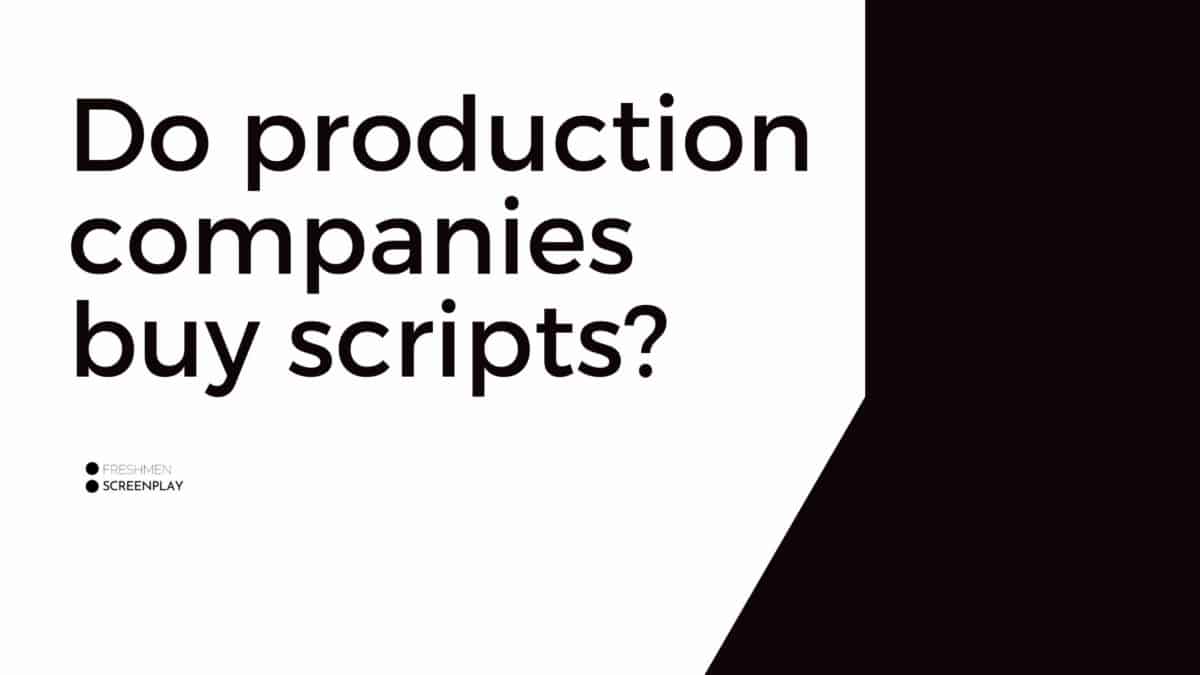 With superhero films taking over, what’s the point of creating an original spec script idea? Are production companies even still buying scripts from writers? Here’s what you need to know.

After researching all the script sales from 2020’s data, this is what I’ve found.

Technically a film studio is just a bigger production company. The only difference is they have the means of financing and distributing without outside help, whereas a production company normally pulls together those resources outside sources.

So you can really say that 21 companies bought scripts in the last year.

If we look back even further to 2019, that list grows by another 10. So this does seem like it’s a downward trend.

So what production companies still buy scripts? Keep reading for a comprehensive list.

The Production Companies that Buy Scripts

As I said, there are 6 that bought scripts on the open market last year.

You probably will recognize the logos more than their names.

What Type of Scripts Do They Buy?

Out of all the scripts bought from the industry last year. Most of them were of the Horror/Thriller genre.

Because those genres of films typically have a low budget, below the 5 million dollar mark. Which makes the profit margin insanely high, between 1,000%-8,000%. The highest profit margin films of all time include:

To name a few.

Some of these films cost under 1 million to produce, but all made over 100 million in pure profit.

With the rise being lower, it makes sense to purchase and make a deal for these genres.

But this isn’t to discourage anyone who doesn’t write these scripts and to think you won’t sell a script because you do not fit a perceived search. You can still get interested and a response from any project.

How do Production Companies Buy Scripts?

How do they buy scripts? They buy screenplays from the results of screenplay competitions, famed screenplay lists such as The Black List, and through screenwriter agents and management.

Let’s break down each of these so you can get a better understanding.

Hollywood producers look for the winners and the top 10% of screenplay competitions worth it. On average, each competition gets about 5,000 scripts submitted. If you get into the top 10%, best believe that more likely than not; your inbox will be flooded with agents and managers looking your way.

But basically, if you score high as in an 8 or better on any of these sites, such as the blacklist. Your inbox will be flooded with interest.

This way is by far the most difficult but yields the best results. Agents and managers have direct contacts full of production heads that they have acquired over sometimes decades. They know what type of story and movies each one wants to produce.

To get one check out my guide to where to submit your script here.

When do Production Companies Buy Screenplays?

After researching the analysis of Scott Myers, it seems that at the beginning of the year and towards the end of the year is when script deals are normally done. October to March

This could be a correlation between the screenwriting competition season that tends to happen around the same time and organizations like the bloodlist and blacklist that freely promote great screenwriters.

Some studios may have writers they call on continuously to write and rewrite material, but these writers are not employees of the studio. They are contractors.

Thanks for getting to the end.

We’ve covered quite a bit in this small article, but now you know how production companies think about the script buying process. Were they buy and what they look for.

I hope this helps you in the future.

What type of script are you writing?

What method are you trying to use to sell your script?