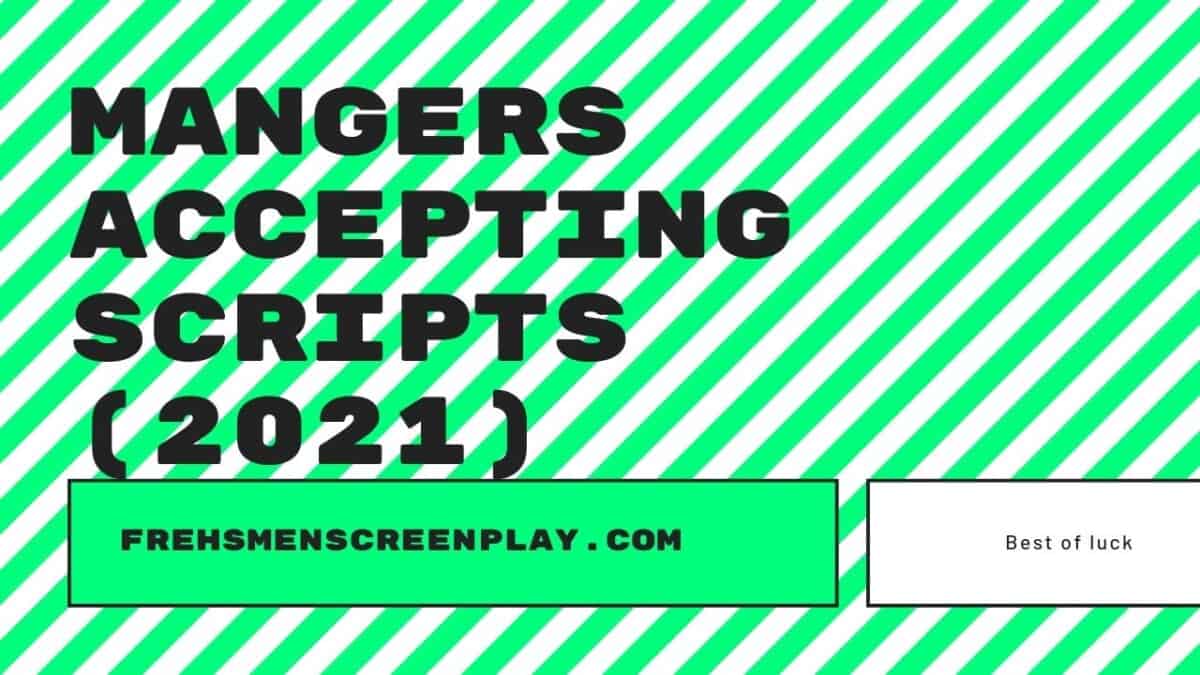 2021 is here, and one of your top resolutions for this year is to have your screenplay finally in the hands of a Hollywood agent.

You saw our recent post on production companies accepting screenplays in 2020, but alas, you came across it too late.

Fortunately, we have a whole new list updated for 2021 of screenplay managers accepting both solicited and unsolicited queries alike.

Make sure you bookmark this article so you can use it as the launchpad for getting in touch with a manager who hopefully loves your screenplay!

We’ll recap what we said in our post about production companies accepting screenplays. When a screenplay manager requests a solicited query, that means they have asked you for information about your script or project. via email or phone call.

This is normally done by a way of them contacting you.

We suggest when contacting these people you make it short and sweet. Either they like what your selling or not.

Since you need to keep it short but sweet, you can’t use the whole page to talk about your screenplay. The best practice is to dedicate a paragraph or two to your screenplay.

If your writing is as good as we’re sure it is, the screenplay itself will do the talking, not so much the solicitation letter.

After you succinctly recap your screenplay, wrap up the letter by inquiring about the screenplay manager’s interest in reading your whole transcript.

Leave your phone number, email address, and other contact information as well. When you’re done, you can send your letter to one of these screenplay managers.

Steve Golin is the founder of Anonymous Content, which has been an LA institution since 1999. Their clients are comedians, actors, writers, and directors in areas such as brand-integrated content, music videos, TV commercials, shows, and feature films.

The Alan Gasmer of Alan Gasmer & Friends has worked on such films as The Mosquito Coast, Fahrenheit 451, and Dublin Murders in his capacity as a Hollywood manager and producer.

Once known as Brillstein-Grey Entertainment, Brillstein Entertainment Partners has been around since 1969 in some iteration. They have more than 200 clients at present.

Not only does DMG Entertainment do film and television, but they’ve entered the realms of VR and gaming a well as live entertainment. They also work with such IP universes as Mini Marilyn and Valiant Comics.

Production and literary management company Epicenter was founded by Allard Cantor. He works with a development executive named Jarrod Murray to craft fine works in film.

Since 1994, Gotham Group has teamed with actors, publishers, illustrators, animators, authors, producers, writers, and directors to bring their works to the big screen. They have spearheaded The Spiderwick Chronicles, Kodachrome, and The Maze Runner.

Peter Heller is the producer and manager at Heller Highwater Productions. He appreciates work with “entertainment value” and “strong voices.”

Infinity Management works in areas such as runway, music videos, movies, TV, industrial videos, print work, and commercials, so they do quite a lot! They’re currently accepting new clients.

Jeff Ross, before his death, was passionate about literature and film, which is why he decided to start Jeff Ross Entertainment. He’s been involved in works such as Good Times, Maude, One Day at a Time, and All in the Family.

Nine 8 Entertainment is owned by Andrew Trapani, who has quite the resume. He’s worked on CBS Films’ Winchester most recently, which stars Helen Mirren.

If you’ve seen the smash hit Soul, that’s the work of New Wave Entertainment. Their other films and shows include 30 Coins, Fatale with Hilary Swank, Happiest Season, and The Trial of the Chicago 7.

An independent television and film production company with screenwriting managers, Rosa Entertainment believes in entertaining audiences to connect with them. Their films include Stand and are Counted, Amargosa, Go Tigers!, Lonely Hearts, The Last Full Measure, and The Widows’ Adventures.

Unsolicited Queries Allowed to these Managers

Not every screenplay manager necessarily requires a formal letter, just as is the case with production companies.

The following managers are fine with you contacting them out of the blue.

Founded in 2009, the boutique production and management company Aperture Entertainment has worked with actors such as Jeremy Lott from Man at Arms, Steven C. Miller from Escape Plan 2, Scott Mann from Final Score, and Simon Rumley from Red, White & Blue.

Led by principal Tony Blain and manager Fran Blain, Blain & Associates says they accept unsolicited screenplays. Still, the information on their website requests that you schedule an appointment before coming by and don’t do any random drop-offs if you want to get your query letter opened.

The literary management company Bellevue Productions specializes in television and feature films. Some of the works by their clients include Better Watch Out, A Crooked Somebody, Bad Match, Office Uprising, and Body Cam.

Both a management and production company, Concept Entertainment will accept shorter and longer screenplays alike.

Responsible for such works as The Crown, Fear the Walking Dead, Trash Fire, and Rim of the World, Circle of Confusion’s clients have gone on to write hit programming for Netflix and more.

Founded in 2000 by Brooklyn Weaver, Energy Entertainment works with talent, directors, and producers that they themselves call “A-list.” Their projects include Bates Motel, Deadpool and Deadpool 2, Major X, and Out of the Furnace.

Andy Cohen is the president of Grade A Entertainment, a small entertainment company with up to 10 employees. Darius Mapp oversees celebrity booking.

The privately-held Good Fear is an LA content company that’s always seeking new voices, as they say on their LinkedIn page.

Jonathan Hung of Hung Entertainment Group is the company’s literary manager, so try to reach out to him when sending your screenplay!

Heroes & Villains Entertainment embraces all sorts of popular media today, from comic books to video games, TV, film, and even emergent new media. Co-founded by Mikhail Nayfeld, Dick Hillenbrand, and Markus Goerg, their client roster is growing all the time!

Michelle Knudsen and Mason Novick’s company MXN Entertainment has produced feature films Arq and Jennifer’s Body as well as the documentary No Cameras Allowed. This agency works in television too.

The Muraviov Company is the brainchild of Kathy Muraviov, who has more than two decades of experience as NBC Universal Studio’s script services manager. She definitely knows her stuff!

If you happen to be outside of California, Pulse Films has locations in Milan, Berlin, Paris, New York, and London as well. The company was founded by Thomas Benski, who also acts as its CEO.

The last company to accept unsolicited queries is Zero Gravity Management. Their filmography is huge. Here are some examples: Ozark, Beasts of No Nation, The Accountant, Running Scared, and I Will Follow You into the Dark.

2021 has only just gotten started, and many people are itching to make it a better, more productive year than 2020.

With this handy, dandy list of screenplay managers, you have 11 and a half months to go through as many managers as it takes to get your screenplay seen and possibly accepted. Good luck!

What did you learn from this article that you didn’t know before?

What company do you plan to contact and why?

Have you had any success reaching out to agents and mangers before?