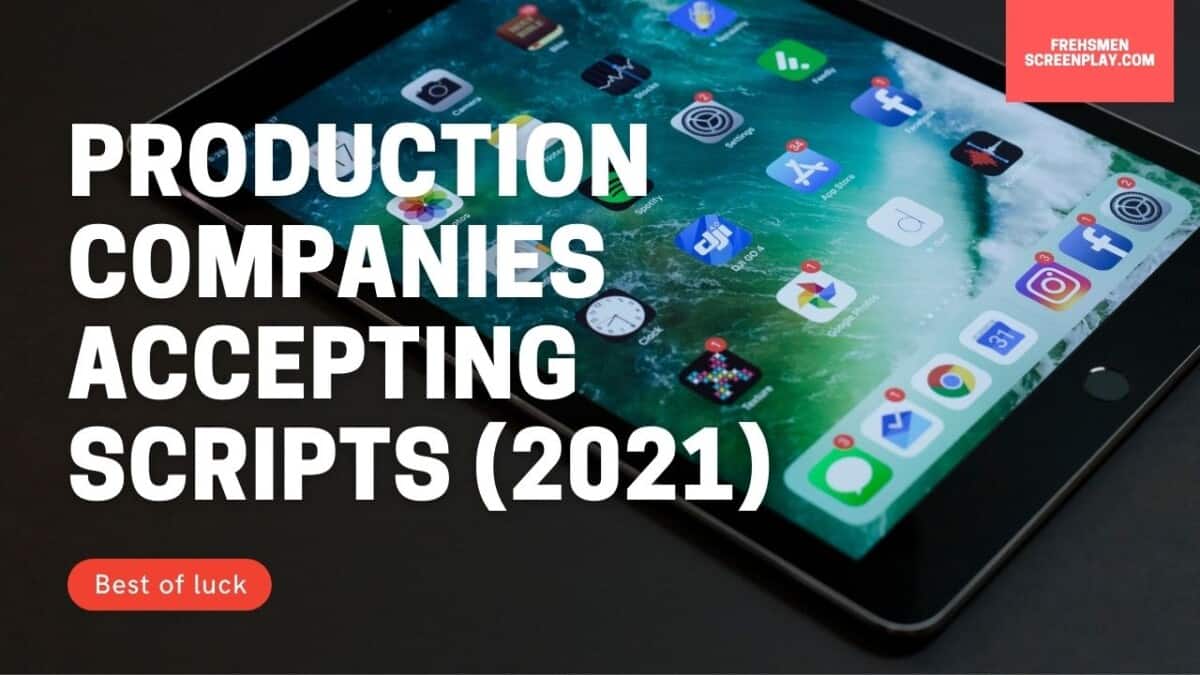 2021 is about to begin! We’ve combed through the Internet to present you with a hugely comprehensive list of which companies currently accept screenplays. From solicited queries to unsolicited queries welcome, you’ll have more than enough options to pursue.

When you query a production company, you send them a letter/ Email. This letter should be aimed at the company’s development executives. Keep the letter short, about a few paragraphs to explain your screenplay.

Then ask whether the development executive has further interest in reading the whole thing. Make sure you provide your contact information as well!

Send queries to companies who have produced your kind of content in the past. Sending a company a rom-com that does horror movies is the quickest way to get on the do not respond list forever.

Here is a list of production companies accepting solicited queries in 2020. We’ll provide some background and the contact info for each.

3 Arts Entertainment was founded in 1991 in Beverly Hills by Howard Klein, Michael Rotenberg, and Erwin Stoff. The company produces both films and television. Movies by the company include Unbroken and Edge of Tomorrow. Some TV show examples are It’s Always Sunny in Philadelphia, The Mindy Project, and The Office.

Based in Los Angeles, Archetype has four managers at current: Shepard Smith, Desiree Middlebrook, David Server, and Ray Miller. Server is in charge of finding new directors and writers and everyone else talent. The company has worked on such productions as The Boys, Find Me in Paris, and The Walking Dead.

With locations in New York, LA, and London, Avalon Management specializes in live comedy in the UK and the US. Some of the US-based productions they’ve worked on are the Comedy Central TV show Workaholics and Amazon Prime Video’s Catastrophe, which was nominated for an Emmy.

Since 1991, Brillstein Entertainment Partners has welcomed talented comedy writers in television. The Brillstein Company had existed before then since 1969. At the time, founder Bernie Brillstein was involved in such works as Saturday Night Live and The Muppets Show. This production company does work in film on occasion, including movies like Happy Gilmore and The Cable Guy.

Founded by Ellen Goldsmith-Vein in West Hollywood in 1994, The Gotham Group has worked on many films over the years, including The Spiderwick Chronicles, Maze Runner: The Scorch Trials, Blackway, and All Together Now.

Todd Komarnicki’s Guy Walks Into a Bar is another small production company to add to your list. Kormarnicki is a novelist and playwright who has worked on Elf, Meet Dave, and Sully.

Since 2004, Manage-ment has worked with high-level directors and writers to bring television and film productions to life. Some of their television work includes such acclaimed shows as Mozart in the Jungle, Narcos, House of Cards, Breaking Bad, and Mad Men.

As entertainment marketers, New Wave Entertainment has brought to the world such works as The Broken Hearts Gallery, The Trial of Chicago 7, The Boys, Animaniacs, and 13 Reasons Why. They have worked on films like Artemis Fowl and Suicide Squad as well.

Nine 8 Entertainment in LA was founded by Andrew Trapani, who also works as a producer for the company. Trapani’s work includes CBS Films’ Winchester with Helen Mirren.

Working in areas of consulting, management, and production, Rain Management Group in LA has produced many programs that win Golden Globes and Oscars. Those programs include Suspicion, Final Space, A Million Little Things, and The Handmaid’s Tale.

As an independent TV and film production company, Rosa Entertainment has produced a variety of films. Those include Go Tigers!, Stand and Be Counted, Lonely Hearts, and The Widows’ Adventures.

The following production companies should accept unsolicited queries. That means you can send your screenplay straight to them without any query letter first. Best of luck!

Santa Monica’s Aligned Entertainment is a talent management firm that works with professionals involved in both film and TV, including Broadway, independent and studio films, and cable and network television.

From The Prince to Desiree, A Deadly Adoption, and Monogamish, Aperture Entertainment has brought many great works to screens everywhere.

The staff at The Cartel have more than 50 years of experience altogether in producing television and film. Their better-known TV works include Judging Amy, Lucifer, Brooklyn 99, NY Undercover, and Black Lightning. The Cartel’s works have sold to such cable and broadcast outlets as Disney Channel, Lifetime, HBO, Showtime, MTV, USA, Starz, and NBC.

Since 2000, when Brooklyn Weaver founded the company, Energy Entertainment has grown to embody the best in written and visual entertainment. Their project resume includes Bates Motel, Black Mass, Deadpool, Out of the Furnace, Run All Night, and Z for Zachariah.

The talent managers at Good Fear appreciate screenwriters who are passionate about storytelling through the mediums of either film or television.

Working in areas such as new media, comics, video games, TV, and film, Heroes & Villains Entertainment has a large roster of television and film clients.

Malibu’s own Jon Klane Company has more than 30 years in the industry partnering with television and film producers, directors, and writers. The company’s works include Moneyball, Jonah Hex, The Sandlot, Ransom, and Nash Bridges.

If you’re looking to get into independent film or TV, try MXN Entertainment. This production company, led by Michelle Knudsen and Mason Novick, has taken home awards for works like Young Adult, Red Eye, Ricky and the Flash, and Juno.

The Los Angeles branch of Pulse Films was founded by Thomas Benski, who is also its CEO. From non-fiction to scripted TV, film, music videos, and commercials, Pulse produces it all.

Jewerl Ross, the namesake, and founder of Silent R Management, is an LA native who worked for film companies such as Paradigm and ICM. Ross decided to open Silent R in 2006, and the rest is history.

For a chance to work with TV and film studios of all sizes, reach out to Zero Gravity Management. Their filmography includes Ozark, Beasts of No Nation, The Accountant, A Family Man, and The Outsider.

You still have time to make the most of 2020 by submitting your screenplay to a production company. The companies we reviewed today take solicited or unsolicited offers, so it’s time to prep your screenplay and shoot your shot. Best of luck!

Now its time to here from you:

What have you been doing to get your foot in the door otherwise?

Whatever your answer is lets here it in the comments below.