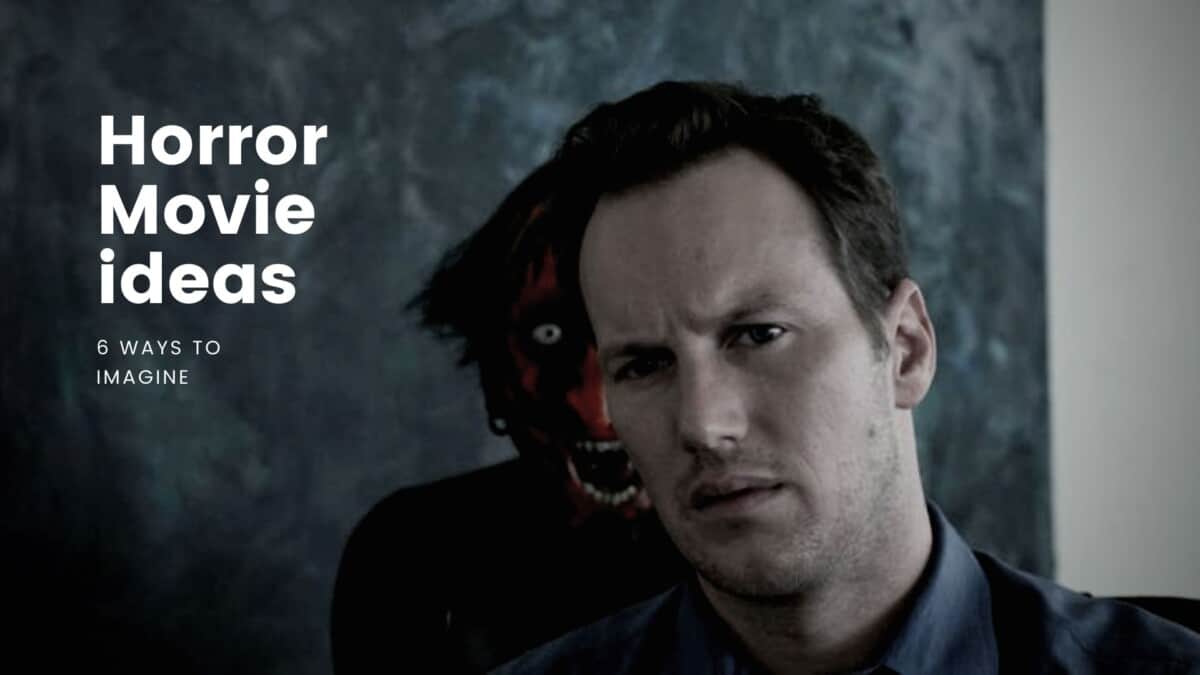 Few movie genres can fill your spine with tension, leave you on the edge of your seat, and get your heart pounding better than horror.

You aspire to be a horror writer on the level of John Carpenter or Wes Craven, but that all begins by coming up with a great idea. Admittedly, you’re a little stumped. How do you dream up the next great scary movie?

Here are some methods for coming up with spine-chilling horror movie ideas:

In today’s post, we’ll talk more about each of these great suggestions for getting your creative horror-writing juices flowing.

We’ll even have a section on what not to do when writing horror, which you’re definitely going to want to check out. Keep reading!

Play into Your Own Fears

What keeps you awake at night? Is it the thought of what might be lingering in the dark, or maybe what’s just outside your window? Perhaps you’ve had a paranormal experience that’s left you shaken.

You might even have a phobia. If so, you’re far from alone. This Verywell Mind article from 2020 cites data from the National Institute of Mental Health or NIMH which says that in the United States, 10 percent of residents are phobic to something specific.

Whatever it is that makes you uncomfortable, you likely share that same fear with thousands if not millions of other people. Those people could be the ones with which your horror movie resonates the most with.

Writing a movie around your personal fears is a great chance to identify and examine those fears, studying them inside and out to understand why they scare you. By the time you’re done writing your first draft, you may even overcome your fear, or at least gain a solid respect and understanding of it.

Use a Location as Your Guide

Have you ever read a Stephen King book? Since you want to write a horror movie, we’d assume the answer is yes. If so, then you know his work is overwhelmingly set in the town of Bangor, Maine. This is King’s hometown.

Although King uses true stories as inspiration for his works, not all the creepy fictional happenings in Bangor are based on real life. Still, King took a town he knew and made it into one of the scariest places in the USA.

You might do the same, writing about your sleepy, quiet hometown or a place you’ve lived in since you graduated college. This location could be the setting point of not just this screenplay, but potentially others down the line as well.

If you don’t think where you come from is necessarily interesting enough to inspire a screenplay, then look into other creepy locations around the world, of which there are many.

Even if another screenwriter already took one location, you should have no shortage of other places to cover. From haunted hotels and penitentiaries, spooky cemeteries, abandoned theaters or lighthouses, or just some towns themselves, the world is a scary place.

To prove the world is a scary place, you need go no further than the history books. As mankind has evolved over the centuries, we’ve had to go through a lot of growing pains.

For instance, just look at the way doctors used to treat patients who had everyday health issues. If you experienced a headache or depression, doctors would drill holes into your skull in what’s known as trepanation. Fun, right?

The Stanford Prison Experiment, the Jonestown Massacre, Columbine; lots of scary events have happened that could spark some ideas for your screenplay. Sometimes you don’t even have to look at inherently scary things to find inspiration for horror.

What do we mean by that? Well, did you know that in on Mount Everest, there’s a part of the mountain called Rainbow Valley that has colorful climbing gear and…a whole bunch of corpses of those who didn’t make it?

Even eerier is that Rainbow Valley is a goalpost on the way up the mountain.

Horror is literally everywhere if you know how and where to look for it.

Review Classic Horror Films and Put a New Twist on Them

If your inspirational well is still running a little dry, you can always watch your favorite horror films and see how you can put a spin on what’s already been done. The emphasis here is that you must have your own unique spin on things.

Horror, as a genre, has a lot of tropes, some that have been done to death. That doesn’t mean there’s no new territory for you to explore. Sometimes all it takes is sitting down and watching a horror movie marathon to get some ideas going in your head.

Urban legends are also good to look into if you want to write a more paranormal horror screenplay. No matter where in the world you come from, there’s probably a scary urban legend or two in your culture.

Some of these legends are passed on by parents trying to get their kids to behave, but others are really interesting and spooky.

Maybe it’s Slender Man that gets your skin crawling or the black-eyed children. Perhaps you believe in some urban legends that celebrities like Paul McCartney died years ago but was replaced by a lookalike and soundalike.

You could even dig into the world of creepypastas, or short scary stories published online that often go viral.

Like with locational horror, plenty of urban legends have already been converted into television or theatrical releases, but not all by far. Try to find an obscure urban legend and you could be the screenwriter to bring him or her to life on the big screen!

The last area to tap into for horror movie ideas is true crime. Unfortunately, there’s no shortage of kidnappings, disappearances, and murders in the world.

These crimes happen every day, and while they’re all heartbreaking, many more are equally as fascinating. That’s especially true for the unsolved crimes or those that are solved but have really bizarre circumstances.

Your horror film could be the retelling of a specific true crime or simply inspired by that crime. If it’s the former, you’re definitely better off getting permission from the family of the dead/missing before you proceed with the screenplay.

If your film succeeds and you skip that important step, you’re likely to create a lot of bad feelings that could undermine the beginning of your screenwriting career.

What NOT to Do When Writing a Horror Screenplay

Horror films are huge box office money-makers. In 2020, The Invisible Man earned $64 million in gross and The New Mutants $22 million.

If you want your film to be held in the upper echelons of big-screen success, then make sure you avoid doing the following when writing your horror screenplay.

1.) Go Too Long Without Anything Scary Happening

This is a horror movie, after all. That’s not to say you should have vapid, disposable characters (unless you’re writing a Jason Vorhees movie, perhaps), but spending too much time on character development at the expense of the horror is not a good idea.

You want to pace the moments of scariness and always be building up to the next one.

Jump scares are cheap thrills, plain and simple. Anyone can pop up in front of you and scare the daylights out of you, but it’s not because they’re truly terrifying, just that they caught you off-guard.

Scaring people from start to finish of your movie just isn’t possible. Whatever scare tactics you use will get tired 30 minutes in, and your movie will fail to have any effect on your audience. That’s about the worst thing that can happen in horror, showing something scary but not making an impact.

If you must use a jump scare, limit it to just a couple, and be aware that jump scares generally aren’t well received.

It’s frustrating when you have a great idea and then you see a movie come out with an idea just like it. That other screenwriter did it first though. By writing something similar, you come across as a copycat.

Like we mentioned before, most horror has been done before, so your special spin is really what will make you stand out. Without that, you’re just another screenwriter with tired horror ideas.

Listen, some horror movies are gore-fests, such as the Saw series, and that’s what people love them. If that’s the direction you want to go in, then fine.

However, there’s a difference between intentionally making a movie gory versus trying to inject shock value anywhere you can because the plot is flimsy or not very good.

Gore and other shocking content have their place even in a horror movie, but you have to know how and where to massage the content in.

If you plan to write a horror screenplay, you can get your movie ideas from many sources. Start with your own inner fears, then branch out to haunted locations, spooky history, true crime, urban legends, and even other existing horror films.

Above all else, make sure your movie is original and it should go over well!

What did you learn that you didnt know before?

How to Come up with Horror Movie Ideas (6 WAYS)
Posted in How to Guides By K.D.WilsonPosted on October 23, 2020October 24, 2020Tagged Horror, movie ideas, scripts