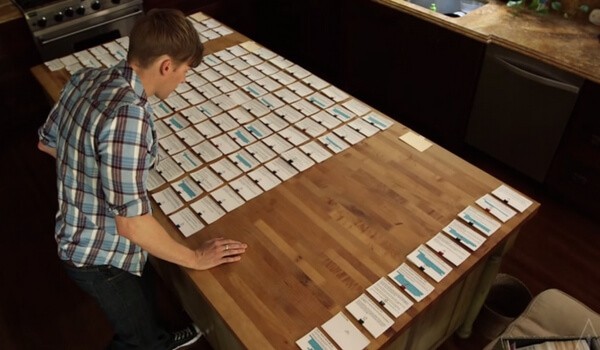 You have a bunch of ideas floating around in your head about your script.

“Will is going to confess his sins but it will be too late before…..what if Abe walks in first before act three then they will find out if he’s really the killer.”

This is you in your head before writing, I’ve been there. Let’s see how to organize these ideas before they’re forgotten.

Now with that said to take this concept further. Let’s see what a professional would do to take this process to the next level.

How to Organize Your First Ideas

Most of the time the idea for a script comes to you at random.

You’re hanging out with your best friend, family, alone in your room or apartment and boom it hits you. But its not really the idea. Its the excitement behind the idea. And its never the whole idea. Its a character, scene, situation, location. Remember these are not screenplay ideas these are only flashes of a story.

But if several of these hit you over the day or several days weeks, they could start to form an idea for a script. This is when you start writing them down.

Why handwrite? Why note cards? Why even write in this digital age? Handwriting is scientifically proven to help you remember what you write and to think deeper about what you’re writing. It has something to do with it taking longer. You have longer to think about what you’re doing. And notecards are just easier to organize when thinking about the structure of your script.

One thing to remember before reading on is you should always carry a stack of notecards with you. Inspiration can hit you at any moment and we’ve all felt ideas thoughts fade from our mind. While screaming please don’t forget.

Lastly, it’s important to know that this is a brainstorming process. Meaning not every idea is going to be used and rightfully shouldn’t. You don’t want to be the person where the production company was interested but the script dragged on too long. Just because you like the idea doesn’t mean the idea is right for the story. It could be filler.

Take a look at how that process looks here:

Next, Write a Logline

Once you have a few ideas written down and some possibly floating in your head its ideal to create a logline. Why? you ask. That’s the same question I had but stubbled upon an answer from Dan Hoffman a produced screenwriter and studio executive. It’s better to create a script from its first selling point. The logline itself.

Most people are going to ask to hear this before they read a word of a script.

A logline is essentially a short story if you really think about it. What creating one does is forces you to take your ideas and form a story. Some popular log lines are:

A computer hacker learns from mysterious rebels about the true nature of his reality and his role in the war against its controllers.

A Las Vegas-set comedy centered around three groomsmen who lose their about-to-be-wed buddy during their drunken misadventures then must retrace their steps in order to find him.

Lion cub and future king Simba searches for his identity. His eagerness to please others and penchant for testing his boundaries sometimes get him into trouble.

Your screenplay ideas all combined into a 1 or 2 sentence story. If you can do this then you can move on to the next part of organizing your ideas.

Write Your Ideas Into a One-page Synopsis

A synopsis describes the plot of your story and lets you expand your ideas you’ve been writing on notecards.

A synopsis again is a selling point of a film. Many studio heads have asked for a synopsis to see if your ideas have been well thought out before asking for more of the story or the script itself.

But even hear when creating one you want to only mention the essential characters, create the tone and build the world your story lives in including a description of the acts. Dialogue can be used but it’s better to use one-liners and I would keep it to one line of dialogue per act if that.

On top of that, a synopsis is written differently than the script. Just like the notes you’ve been writing 3-4 sentences at a time sometimes in Pros.

Check out this example from studio binder below:

Write Your Ideas into a Treatment

This is where your ideas really come to life what does it include:

If you want to know more about the working parts and how to write one in detail check out my post below:

What is a script treatment? How to write one professionally

The treatment is where you take all the ideas on your notecards for your script and go a little bit crazy write in pros and create that same excitement on the page as you did when you wrote it down in the first place. The treatment is longer letting you fill it with more detail that you wouldn’t put on a teaser synopsis.

Now don’t fill it with micro detail but just enough to get your characters to the next major turning point in the story. Treatments can be anywhere between 5 – 20 pages. But if yours is on the longer side the objective is to keep it exciting. Think of it as a written comic book with action spiced every other paragraph.

Another key point is you want to reveal the ending you had in mind here. Let them have it.

Always Get Feedback and Adjust

During each part of this process, you’re going to be tempted to rush to the next. Don’t. Most new screenwriters think their ideas are the ones that are going to be the next big thing. Experienced writers know it takes time. So you should slow it down and always get feedback on your ideas.

Generally when you’ve organized your first ideas into a logline. The feedback process should start. Send it to people you trust but not your mother or your uncle. Send it to people who are in the industry in some capacity. I don’t care if it’s a script reader at a small production company anyone like that is going to be better than your mom.

When getting feedback the most important thing to notice no matter what they say. Is if they ask follow up questions. Getting “This is good” is not always good. If they want to know more you can see you’ve got something.

Then adjust to the feedback make it better based on the professional’s advice. Then send it to another person. You should move on to the next phase once you start getting more people interested than not.

Organizing ideas can be a headache if you don’t know what you’re doing. Some people just start writing. This might work for more experienced writers but for a lot of the first time writers it could make your head spin. Start with the notecard process and move it to a bigger and bigger format until the story becomes so clear that writing a script becomes easy.