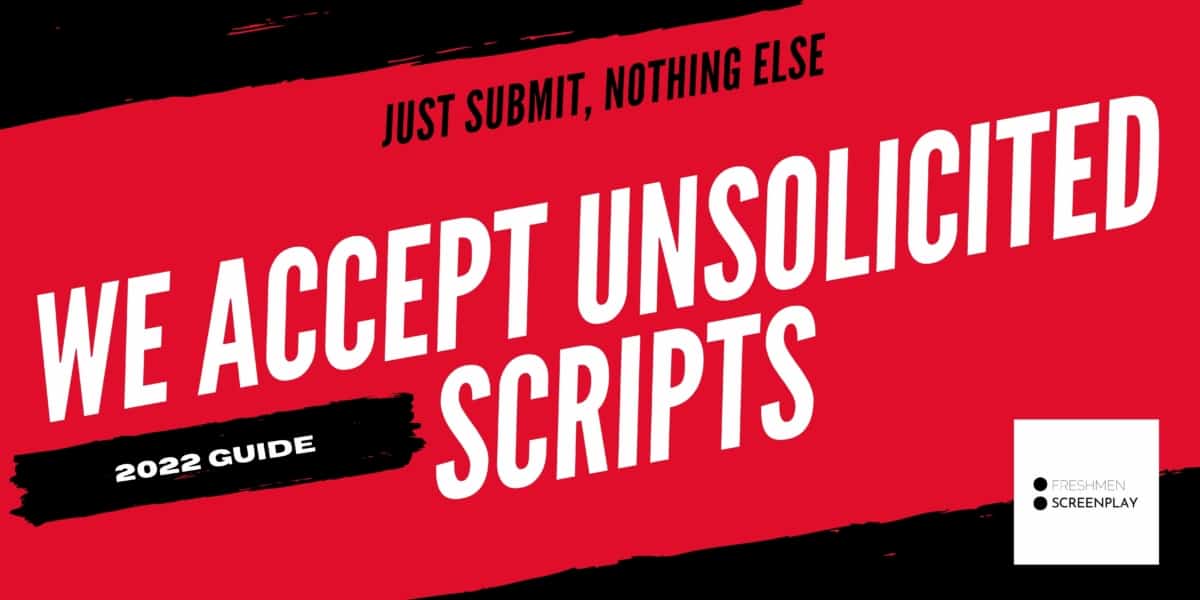 Do you want your screenplay to be the next Squid Game or Dune? You know your script is good, but you don’t yet have representation from a screenwriting agent or manager. Are there any studios and production houses that specifically say, “We accept unsolicited scripts?” Yes, we found 10 of them.

This is a list of the UK and American production companies. Most want Feature films, but some will take a TV script. Why did we include the UK because Hollywood is no longer the only player in this game.

This guide will provide contact information and let you know what they’re looking for in their script submissions. By the time you’re done reading, you’ll have a shortlist of companies to contact for the year ahead!

BBC Studios needs no introduction, but I’ll remind you of the impressive roster of films the production company has gifted the world. They include 2017’s King Charles III, 2019’s Surviving America’s Most Hated Family, and 2020’s Mangrove.

At current, BBC Studios has an Open Call opportunity for screenwriters to submit their work. These opportunities crop up throughout the year, but only during select times.

If you submit your screenplay by January 13th, 2022, it could someday become another beloved BBC work. BBC wants screenwriters to submit scripts in genres like comedy or drama. Your screenplay should be at least 30 pages, and it should be edited to perfection before you submit it, so no rough drafts, please. Include a resume detailing your writing experience as well.

Blake Borcich’s LaRoda Films in the UK is eager for “fresh and innovative material,” short stories, screenplays, or scripts. The materials can be unsolicited and–even better–any length you desire!

Blake is a young and innovative producer who is on his way up. I think it’s important to meet and build relationships with people like this because they could end up being an executive that changes everything for you.

LaRoda asks that you include a one-page treatment or synopsis with your submission. You can reach Borcich by email at blake@blakeborcich.com.

Another film company in the UK, Century Films, produces documentaries and dramas. Their body of work includes documentaries such as Mumbai High: The Musical, The Confessions of Thomas Quick, and Britain’s Biggest Primary School.

If your writing gels with what Century Films are interested in, create a pitch about a page in length and then submit it. You can contact Century Films by email at development@centuryfilmsltd.com.

In Houston, Texas, LLeju Productions and Films has produced such works as Dark Around the Stars, The Baytown Outlaws, After. Life with Christina Ricci and The Chameleon. And we can’t forget one of my favorite films Unthinkable.

They are not your typical company that wants to push the boundaries with their films.

Submit your synopsis and logline. If the staff at LLeju are interested in proceeding with you, they’ll be in touch to request your whole screenplay as well as send you a release form. You can contact LLeju by email at info@lleju.com.

Orange, California’s Birchwood Pictures has produced small-scale films like Overcomer, Grace Unplugged, and Lightkeepers. They prefer original properties such as books, treatments, or screenplays. So for people who have written books that are turning their books into screenplays, this is for you.

You must submit your screenplay in the standard format for consideration.
You can reach Birchwood Pictures by phone at 714-538-4323.

One-Eyed Dog Films is glad to look at even unsolicited scripts if you email them to submissions@one-eyed-dog-films.com and include your full name, your phone number, and your email address in the body of the email.

You should provide a title for your screenplay and mention whether it’s a feature film or a TV show too. You’ll have to write a logline that’s 20 words or fewer and a synopsis that does not exceed 500 words.

Jade Alexander is the namesake behind Little Jade Productions in the UK. Alexander and her team have produced works such as the short film Great Expectations and immersive theater-like Ex Libris Macabre.

For this company, you will need to be a writer with two credits on projects that have been accepted into film festivals. So some experience is needed.

Your script must have a female lead role and fit into the fantasy or sci-fi genres. so they might be one to come back to later in 2022.

The great thing about this offer is some of the writers contacting me have some credits on IMDB already from short films and maybe a feature. That will make you eligible for opportunities.

Berlin’s Wim Wenders created Road Movies in 1976. Since its founding, more than 100 of Wenders’ arthouse movies have been produced in many decades. He’s also worked with a slew of directors.

The company is big into documentaries, having produced Luca Lucchesi’s 2020 film A Black Jesus and 2021’s Souad by Ayten Amin.
Wenders’ works include Palermo Shooting, Don’t Come Knocking, Bread and Roses, and Wings of Desire.

If you want to get involved with Road Movies, you can submit a treatment or synopsis, but save your screenplay for when you (hopefully) hear back. If you submit your script in the initial email, the company mentions that they won’t read it.

You can get in touch with Road Movies by email: info@roadmovies.com.

Jump Start Productions in the UK was founded in 2009 to produce independent feature-length films. Their roster of films includes Tracks, Fractured, Home for Christmas, Further Ed, and Daisy. Many more films are on the way.

Your screenplay could be adapted into a film that gets added to Jump Start’s list of productions. The company requests that you only send unsolicited scripts to their email address: info@jumpstartproductions.co.uk.

The last company accepting unsolicited scripts is Elevating Entertainment, a Nashville, Tennessee boutique motion picture production company, as they like to call themselves.

A handful of Elevating Entertainment’s works are Shakespeare School Year, Season of Miracles, NO LIMIT KIDS: Much Ado About Middle School, and Silver Twins.

Here is the form you can fill out to send your screenplay to Elevating Entertainment. In the form, you must input your first and last name, your email address, your phone number, and the title of your story. Then write out a brief synopsis and upload your screenplay.

If you want, you can add comments before you click the submit button.

Even though these companies will read your script you still only get at most one shot with them. I think it’s crucial to have your script read and analyzed by professionals. Check them out here.

Submitting unsolicited screenplays used to be a gamble, and it still can be if the company in question doesn’t accept them. Fortunately, these 10 film studios and production houses will gladly take a look at an unsolicited script, so feel free to submit your work to as many companies as you want!

Which of these companies is the most exciting?

Are you going to submit an unsolicited screenplay now that you’ve seen this list?

Let me know in the comments below.