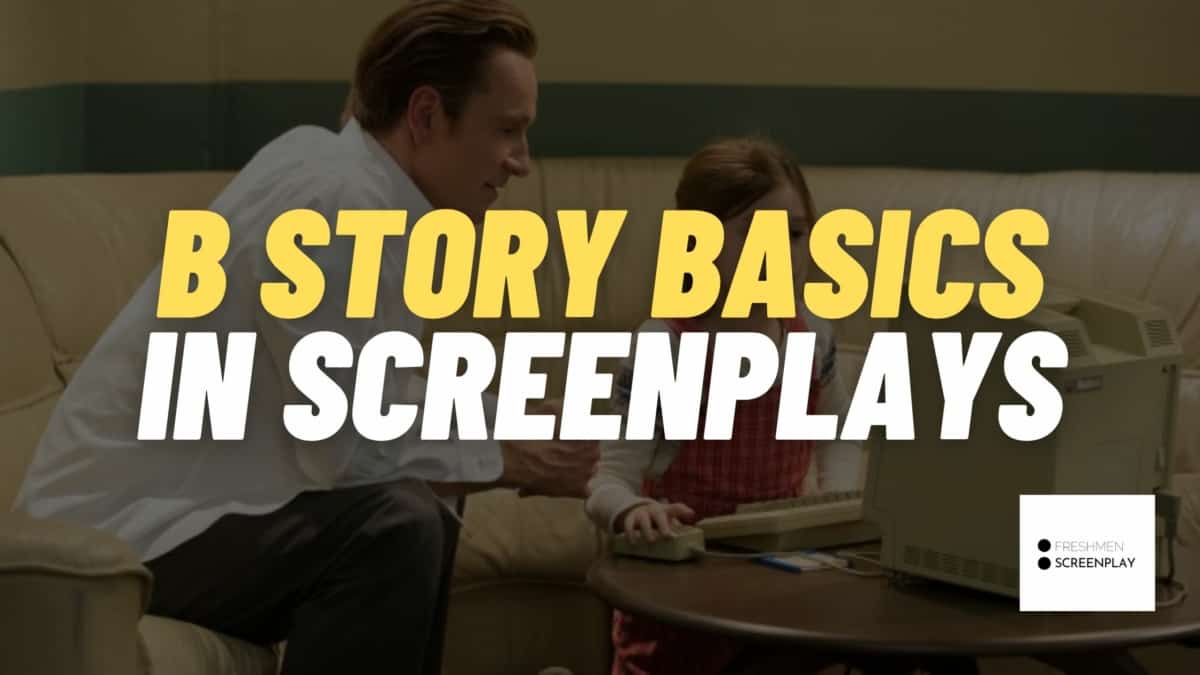 When sitting down to write your screenplay, the plot is one of the most important considerations. You can’t create enduring characters and write rich dialogue without knowing the plot. Yet a one-plot story is incomplete, which is why your screenwriting coach told you to add a B story to your screenplay.

A story – The dedication to become the greatest drummer ever.

B story – His relationship with his family and more crucial his father.

If you haven’t seen this movie I recommend it. The reason I use it as an example is that it’s a simple yet powerful story where you can clearly see the differences between the A and B storylines.

If you’re looking for more information on B stories in screenplays, you’ve come to the right place.

Ahead, I’ll explain B stories in detail and what they achieve. I’ll share plenty of B story examples too.

So make sure you keep reading!

What Does a B Story Do?

Screenplays, whether for film or television, are divided into stories. You’ll often hear producers and agents refer to an A story, a B story, and a C story.

The main purpose of a B story or B plot is to supplement the A story and give your characters other objectives to overcome and more chances to change. If your main story is the A plot, that storyline can only go so far before it runs out. Yet you have to fill 100 pages of material.

The B plot interlaces with the A-plot but is its own full-fledged story. At first, it can seem like the two stories are unrelated, but they always find a way of connecting in the end.

Perhaps a character you’ve mostly seen in the B plot helps the main character in the A-plot, or it’s some element of the B story being integral in the ending of the A story.

Reasons to have a B plot include:

Character change – outside influences coming from B plots can help a character realize what he or she needs to do in order to get the outcome they want.

Conflict – a B plot could potentially be another hindrance to the main character in their objective.

Obstacles – B stories can help with unforeseen obstacles in the plot. This can throw your readers off in a way that keeps them guessing what will happen next.

5 Real B Story Examples in Movies

I’m sure you want some examples of real B plots in your favorite films. Here are five such movies that run the gamut regarding genre and an overview of their separate A and B stories.

A great screenwriting resource called Save the Cat! The Last Book on Screenwriting You’ll Ever Need by Blake Snyder talks about the 2001 film Legally Blonde.

The premise of Legally Blonde is that Elle Woods is dumped by her boyfriend and decides to prove her intelligence by going to law school. to get her man back.

The start of the B story is when Witherspoon’s character Elle meets a woman named Paulette (played by Jennifer Coolidge). That Paulette is another woman dealing with men’s’s issues links her story to Elle’s. At the end, when Elle is seduced by her Harvard instructor and almost quits studying law, Paulette encourages her to get back at it and Elle is resolved to continue.

The 2007 film Superbad starring Michael Cera, Seth Rogen, and Jonah Hill is a classic. It’s also beloved for its strong B story.

Two high school boys named Evan and Seth are about to go off to college and want to lose their virginity before the big move.

Local police Officers Michaels and Slater. The two older men are desperate to still be perceived as cool. The character Fogell, played by Christopher Mintz-Plasse, knows the characters in the A plot and the B plot, making him an integral part of the storyline (and not just for the humor).

The beloved sci-fi film from 1982, Blade Runner, is another title with a compelling B story.

Rick Deckard (Ford) is a blade runner whose job is to destroy replicants, which are humanoids. Deckard tries to retire from his job, but his boss forces him and Officer Gaff (Olmos) to find four more replicants who had escaped.

The conflict in the plot is that Deckard falls for Rachel (Young), who’s a replicant herself.

The B story of Blade Runner involves one replicant named Pris and J. F. Sebastian, a designer of replicants. Although Pris appears to be Sebastian’s friend, he’s manipulating the designer. This allows Pris to glean more information that teaches us about the premise of the replicants.

That part of the story would have been missing if the Blade Runner plot focused solely on the A storyline with Harrison Ford’s character.

4.) The Silence of the Lambs B story

The horror title The Silence of the Lambs is a film released in 1991.

The Silence of the Lambs is about aspiring FBI director Clarice Starling, who interviews known serial killer Dr. Hannibal Lecter, who’s also a cannibal. To get into a killer’s mind to find the current killer on the loose.

Catherine Martin, a kidnapped woman who’s also the daughter of a senator.

Starling’s attempts to rescue Catherine add more to the story and tie into the film name, as Starling suffers nightmares of screaming lambs and believes that saving Catherine could stop that.

Annie (Kristen Wiig) someone with no romantic prospects, finds out her friend Lillian (Maya Rudolph), is engaged, she begrudgingly becomes a maid of honor.

A new friend comes into the loop and tries to replace Annie as the maid of honor taking what is left she has in her life.

Annie finds a cop who could become the romantic life partner she’s been looking for but she’s too caught up with her bridesmaid’s battle to see it.

B stories in a screenplay are complements to the A story that can flesh out characters. The two storylines intertwine, often in the least expected moments, and can make a film or television screenplay feel much more complete.

Now that you understand the importance of B plots, you’re well on your way to writing your own memorable ones!

Did I miss anything

What B story are you looking to incorporate in your script?

What Is a B Story in a Screenplay? Complete guide (Real Movie Examples)
Posted in How to Guides By D.K.WilsonPosted on October 2, 2021October 2, 2021Tagged A story, B story