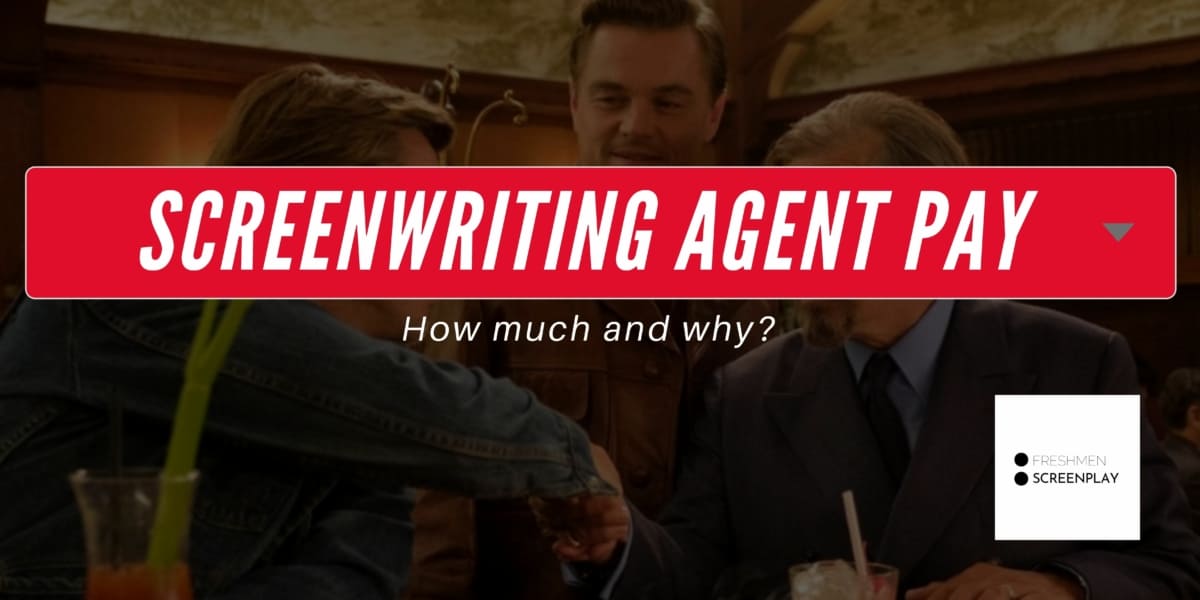 Did you know you shouldn’t be paying a screenwriting agent upfront? If you are talking to someone about representation and want upfront money that’s not an agent, please stop emailing them.

Instead, they should be working on a commission basis.

To understand the whole purpose of a screenwriting agent or find out if you should even bother trying to look for one, read on.

How Much Does a Screenwriting Agent Make?

Contrary to popular belief, a good screenwriting agent is very affordable, but consequently, they are hard to acquire.

But this number can increase or decrease depending on the sale price.

David Koepp sold his script panic room for 3 million dollars depending on his deal with his agent. The agent gets a max of 10%, making the agent’s fee $300,000. But this is an extreme example.

So you can see that it’s in your agent’s best interest to get the highest purchase price for your script.

Now a typical agent works with 30-60 writers at one time to ensure a decent take home.

As a comparison, screenwriting managers typically ask for a 15% cut. However, managers are usually working more intimately with fewer clients.

It would be best to be cautious around screenwriting agents who do not have many clients or are not willing to share the number of sales they have made previously. After all, 10% of your script sales is still a payment that you could personally benefit.

Ensure that you research potential agents and honestly evaluate them to see if they would be worth your money.

Why Do Screenwriting Agents Cost That Much?

Any aspiring screenwriter knows the story: you have a great script that you need to get produced. However, a producer won’t look at your script until an agent officially represents you.

Because Hollywood is bombarded with amateur scripts all the time, and most of them are unreadable. Trust me, people send me their script, and I have to find new ways to tell them why no one responds politely. They dont have the things producers look for in a script—the agent functions as a broker. Somone to shift through everything and find what the producers want and present that to them.

But what exactly does an agent do, and is getting represented worth the hassle?

Most creatives are unaware or get confused by the various legal proceedings regarding screenwriting contracts and negotiating a deal with potential producers. That is where a screenwriting agent comes in.

When broken down, a screenwriting agent is a person of business.

Production companies trust them because of their history of consistently bringing them the material they want. This trust is built over maybe even ten years in the business. That’s is undoubtedly worth 10%.

More on that here

When Does a Screenwriting Agent Get Paid?

Screenwriting agents work by commissions. Simply put, they get paid when you get paid.

There have been stories of writers spending an unaffordable amount of money on upfront agent fees with the promise of million-dollar deals. Then the agent magically disappears, leaving the writer disheartened and with an empty wallet.

It is a mark of a scam agent if they ask you to pay an upfront fee at any point. Sure, they may make good on their promise and sell your screenplay, but it is not guaranteed.

A good agent should be passionate about your scrip and sell it to producers and directors.

Industry folks are also well aware of how screenwriting agents work. They know that an upfront payment means that the agent is selling the script simply because they are paid to do so. Not because they genuinely care about the story.

If you want your script to make it into a producer’s hand, find an agent that shows a genuine interest in both you and your script.

What to Look for in a Screenwriting Agent?

There are 3 main traits that make a great screenwriting agent:

Screenwriting agents are hard to connect with and you don’t want to waste your time or energy working with someone who can’t help you sell your script.

So, when you have that first meeting with a potential agent, get to know them. Ask just as many questions as they ask you. You’d be surprised at how many agents are looking to make a quick buck from hopeful writers. The internet is littered with stories of agents just holding your script not selling it becasue they are bussy with some other writer.

Is it Worth Getting a Screenwriting Agent?

The truth is that an agent isn’t essential to break into the industry… but it certainly helps!

Working with an agent to handle the business leaves you with more time to actually write. The inside connections that an agent has will also help you break into an otherwise impenetrable industry.

A screenwriter who has high ambitions and wishes to sell their script to big dogs such as Netflix or Disney would benefit greatly from an agent, mainly because most reputable production companies tend to cast aside a script if it is not associated with an agent.

Beginner screenwriters or those just starting out in the industry should consider securing a screening manager rather than an agent.

Once you have gotten several scripts to a stage where they are ready to be sold, your manager will most likely have a few agents who can help you with that next step.

Or, if you are willing to do all the leg work yourself, you can save yourself that 10% cut. You may not yield great results as quickly as an agent, but there is always a chance that you can strike yourself that life-changing deal without the need for a screenwriting agent.

Do you think you need a screenwriting agent?

Do you have experience with using a screenwriter agent? If so, were they worth the money?

How Much Does a Screenwriting Agent Cost?
Posted in Industry Knowledge By D.K.WilsonPosted on November 8, 2021November 8, 2021Tagged Agents, screenwriter agent