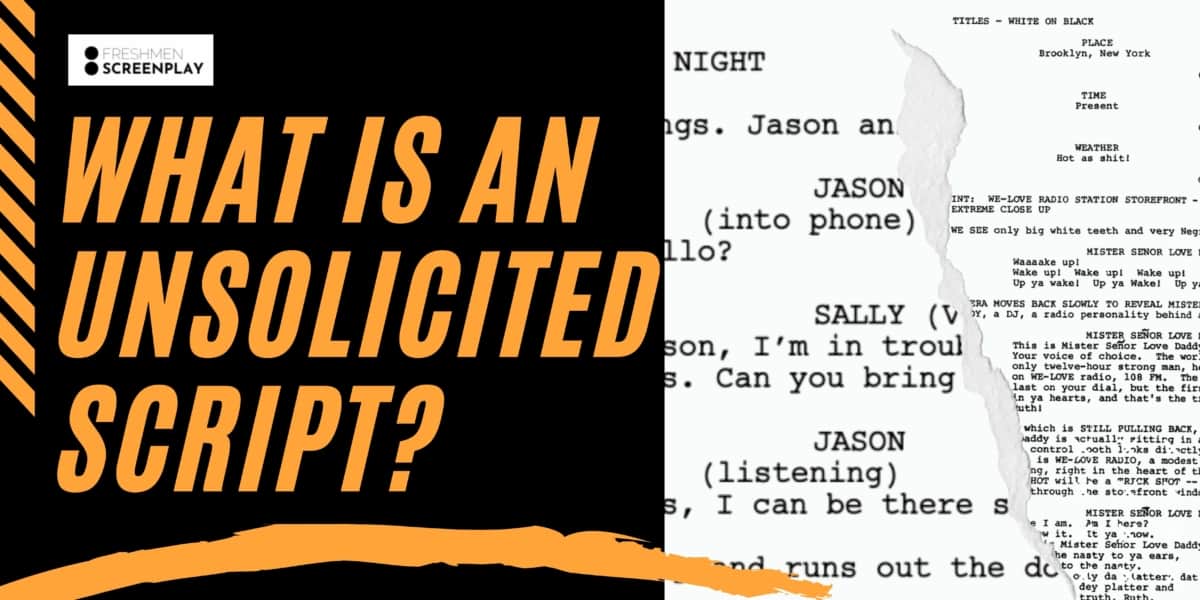 As you polish your screenplay and prepare to share it with the world, you have the option to send it unsolicited. To you, this sounds like a rather devious avenue to pursue, but you don’t quite know what unsolicited means in this context either.

What is an unsolicited screenplay? It’s a screenplay sent to a production house, director, or actor by someone other than another industry professional like an agent or manager. Screenwriters who will send the script themselves, often are considered unsolicited scripts.

If you have more questions about unsolicited screenplays, I have answers.

Ahead, I’ll talk about the logistics of sending an unsolicited script and whether sending them is illegal.

What Happens When You Send Your Script Unsolicited?

The role of the screenwriting manager and agent would be to enter contract negotiations, guide your career, and connect you with parties who might want to see your writing.

You’ve spent so much time writing and rewriting your script that you even know how to find a screenwriting manager or agent.

That means you’re sending a script unsolicited. What happens if you do that? If you were to send an unsolicited screenplay, it would probably be thrown in the trash in the case of a mailed screenplay. If you emailed your writing, your message would be deleted.

But not always more on that later

Some production companies and film studios take it a step further. Send your printed screenplay back to you with a letter reiterating that the company doesn’t accept unsolicited scripts and that no one reads your screenplay.

Why are Unsolicited Scripts Frowned Upon?

1.) If they then opened the door to unsolicited screenplays, they’d get emails and snail mail around the clock. They’d never have time to look at any screenplays.

2.) a solicited script usually comes with a guarantee of higher quality. A screenwriting agent and manager guide the screenwriter in their script.

3.) Creatives are protective of their work. If they accept your unsolicited script and something that even remotely looks similar to your movie comes out, they can be sued even if they didn’t get the idea from your IP.

Now some people do still read your script if send uninvited. But it’s how you send it that matters.

Is It Illegal to Send Your Script Unsolicited?


You’re a little nervous about sending an unsolicited script, as you’re afraid it’d be perceived the same way.

No, it’s not illegal to send an unsolicited script, so you don’t have to worry about that.

Now, if you began calling, e-blasting, or visiting the production company incessantly, even after they told you they’re not interested, you could find yourself in some legal hot water.

The word “unsolicited” carries with it some very negative connotations, such as unsolicited email or unsolicited callers (aka telemarketers) calling you at dinnertime.

B.) your screenplay is being sent back to you with a letter. Your ego will be bruised, but your legal record will be clean.

That said, there are some legal reasons that film studios and production companies will turn down reviewing unsolicited screenplays. Let’s say that you have an excellent idea for a screenplay, so you send it to 10 studios. You never hear back because your script was unsolicited.

Several years later, a movie comes out with a concept that’s very similar to your idea. You can turn around and sue the film studio or the executive who made the movie and claim that the scriptwriter ripped off your view.

Of course, lawsuits like these don’t tend to hold up in court, as you’d have to prove that you came up with the idea first and that your vision is 100 percent original, but what film studio wants to get embroiled in a lawsuit if they don’t have to?

Examples of Sending a Script Unsolicited

This type of screenplay is non-commissioned and unsolicited if sent without an agent.

Spec scripts are not quite the same as production scripts or shooting scripts, as they’re more story-based and less about what the direction and camera should be like.

Do these kinds of unsolicited scripts work?

They sure do, and here are some examples.

To name a few famous examples. Some that were sold in the last couple of years are:

You may not know these because they were not made into movies yet but sold nonetheless. Here are a few that you may know.

Midnight in the Switchgrass

Alan Horsnail wrote a spec script just last year, and now he has a movie with Bruce Willis and Megan Fox. He submitted it to the last company on this list. And his life was changed forever with a new three-picture deal with Bruce Willis called The Fortress.

William Goldman and Butch Cassidy and the Sundance Kid

You’re likely familiar with the 1969 film classic Butch Cassidy and the Sundance Kid with Robert Redford, Paul Newman, Katharine Ross, Jeff Corey, Strother Martin, and Henry Jones. The film is about the outlaws of the Wild West.

William Goldman, who wrote the famous script, got a lot of attention. He eventually sold the script to Warner Brothers, earning $400,000. A bit of a bidding war erupted before he chose Warner.

Unlike Preston Sturges’ movie, Butch Cassidy and the Sundance Kid received an Academy Award for Best Screenplay. Spec scripts also blossomed for a while after the movie came out.

Alan Ball wrote the movie about midlife crises. In 1998, he sold the film for $250,000 to DreamWorks Pictures. American Beauty won a series of awards, including Best Picture, Best Director, Best Actor, and Best Original Screenplay Academy Awards, not to mention Best Cinematography.

How to Send Your Screenplay the Legit Way

Spec screenplays can be wildly successful, but for every Academy Award-winning, the unsolicited script is thousands more that didn’t make it. Instead, if you’d stick with sending only solicited materials, that’s a safer bet.

You know the production manager or executive will want to see your screenplay, so they’ll take time to give it a thorough read-through.
How do you go about sending your screenplay the legit way? Here are the steps.

Start with a Screenwriting Manager

I’d recommend getting both a screenwriting manager and agent if you can, but you want to begin with the manager first. They’re going to manage your career, edit your screenplay, help you move towards your professional goals, and even introduce you to potential agents.

I’ve talked about obtaining a screenwriting manager on the blog in the past, but allow me to recap some tactics you can try.
Use IMDB Pro and online pitch sites like InkTip or Stage32. You should also tap into your social circle and ask if anyone knows anyone. Don’t be afraid to get out in person and network as well.

Once you’ve narrowed down your list of screenwriting managers to connect with, you should send them a query letter. The letter should include your name, credentials, and information on what screenplay you’re working on now.

When I say some information, I mean a title and logline and maybe a sentence or two describing the premise. Don’t forget to include your contact information too.
If you can’t find a screenwriting manager using these methods, don’t underestimate the power of entering a writing contest. As part of your prize, if you win, you might be connected with a manager or an agent.

Then Get an Agent

Your agent can put your foot in the door amongst producers and film studios, which you won’t know how to do if this is your first screenplay. The same methods as above work for finding an agent, but don’t forget to ask your manager who they know!

Once you have a screenwriting agent and manager working on your behalf, sooner or later, they’ll recommend an opportunity for you to send your screenplay. It would help if you were doing your homework, too, researching production companies and film studios welcoming solicited scripts.

An unsolicited screenplay is a script that doesn’t come from a manager or agent, only the screenwriter themselves. Please don’t waste your time sending one unless a production company accepts them! While not illegal, unsolicited scripts are largely not welcome.

Do you plan on selling your screenplay unsolicited?

What did you learn from this post about unsolicited scripts?

Whatever it is, let’s hear it in the comments below.

8 thoughts on “What Is an Unsolicited Screenplay?”