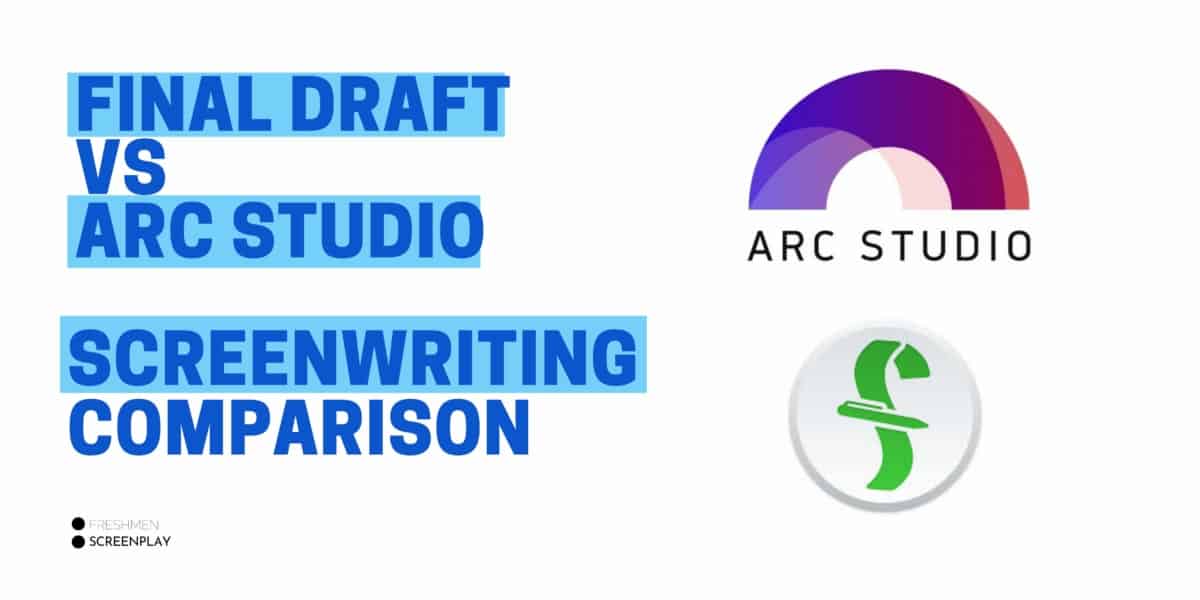 This post will compare two of the best screenwriting software programs around- Final Draft and Arc Studio.

Our first-hand knowledge and experience of both of these programs will ensure by the end of this post. You will have a clear idea of which you should use and why.

While it’s clear that Arc Studio is an emerging favorite for beginner screenwriters, Final Draft is still the industry standard, with over 95% of Hollywood using it.

So why doesn’t everyone use Final Draft?

Read on and find out. Learn why these two programs are highly rated amongst screenwriters.

Both of these screenwriting programs are number one and two on our top ten software list.

Above is our simplistic table of comparisons for Final Draft and Arc Studio. On the surface level, you can see they are very similar; however, you can see that we’ve scored Arc Studio slightly higher than Final Draft in the ease of use and UI category. Additionally, there are discrepancies in price and versions you can buy.

In the next section, we will detail the specific features that each screenwriting software possesses while also weighing up some of the negatives of each.

Arc Studio is new to the industry and has only just started to emerge as a severe option to screenwriters over the last few years.

The most striking thing about Arc is that its base version is entirely free!

Let’s go over the software in a bit more detail:

The thing that sets Arc Studio apart is undoubtedly the design elements and how accessible the whole program is for beginners and veterans alike.

The central writing screen is sparsely populated- but in a good way. Gone is the unnecessary clutter and features from other programs. Instead, a simple taskbar with minimal dropdown options is present, ensuring simplistic navigation.

The color pallet is reserved and comforting, blending white and purple for a simple design, with the bonus of a night mode for late writing sessions.

Arc Studio is available for download for Windows and Mac or used directly through your browser. There is also a mobile app for the software, further enhancing the software’s integration capabilities, handy for writing on the go when you don’t have your laptop present.

The ease of use of Arc Studio is another standout asset, demonstrated by the commitment to collaboration features and an outlining tool.

The collaboration aspect is easy as Arc allows you to invite authors as co-writers, where you can all edit and write simultaneously in the same place.

There are several great editing features like automatic version saves.

This feature allows you to recover different script iterations and a fully recoverable trash can. Meaning you don’t need to worry about accidentally losing a great scene or piece of dialogue.

The outlining tool is also great for getting a clear story outline without the clutter in much other screenwriting software, using digital notes, and organizing them for you- the tool also helps with specific beats, characters, and several other essential elements.

While we have outlined most of the best features already, it seemed essential to dedicate a mini section to the revolutionary Arc Mode feature.

This mode allows you to visualize your entire screenplay as a colorful timeline while seamlessly integrating beats and scenes. Having everything presented in one place clearly and visually is excellent for beginner screenwriters and helps break down what works in the story structure and what doesn’t.

In all honesty, there aren’t many/negatives when it comes to Arc Studio! Because this is an industry-standard software, you can use it for free, while being so simplistic and user-friendly means it’s hard to find any faults.

The only issue established screenwriters may face is adjusting to the software if used to others, but as we’ve found- Arc makes it so simple.

Final Draft is the industry standard for screenwriting software.

Industry titans such as James Cameron and JJ Abrams use Final Draft, and it would be hard to find a prominent screenwriter who hasn’t at least tried it before.

Final Draft was used to write these films.

This is because Final Draft is associated with premium level quality, a service that has very high standards and allows you to write screenplays with ease. The current iteration of Final Draft is 12, with the software regularly upgraded for a smaller fee than the original pricing to existing customers.

Let’s look into it in some more detail.

Switching between Character Names, Dialogue, Parentheticals, and other essential writing functions is easy, with a clickable drop menu at the top of the screen. Final Draft is simple in terms of design, with just a plain white backdrop and numbered pages.

You can easily navigate to the Title Page, Beat Board, and Index Cards via the ‘View’ dropdown menu at the top overall; it’s a pretty good UI.

Final Draft is user-friendly and easy to use/navigate. As mentioned previously there are several drop-down menus that are clear to navigate to which tool/feature you need.

The Beat Board is a good way to plan each beat or certain scenes and allows color coordination, improving visual understanding of whatever you’re working on.

The best thing about Final Draft is the auto-formatting and industry-standard tool correction, which means even if you don’t fully understand formatting it’s still relatively simple to produce a script that is correctly formatted and industry standard.

These shortcuts are a massive timesaver and allow you to write uninterrupted without breaking your creative flow. Final Draft also offers collaboration sessions which are mostly straightforward to set up, you just need to create a network session and share the script with your collaborator.

One of the highlights of Final Draft is the Beat Board, purely for the visual aid element to it. Much like Arc Studios ‘Arc Mode’, this visual aid makes understanding the structure and building blocks of your screenplay much more manageable and less imposing.

Beat Board is very customizable and can be moved around effortlessly, so you can rearrange beats and idea notes easily. Below is an example of the Beat Board where I used color coordination in order to sort my story into A, B, and C plotlines.

The major negative of Final Draft is the upfront price. It’s that simple. Aside from this, there is an argument that the number of features can be a little overwhelming for newcomers, and another drawback is the fact that the autosave and recovery tools could be better.

Unlike Arc Studio, Final Draft isn’t available for free. There is a 30-day trial version, but after that, you have to pay $250 for the software. If you are a student or a member of an education faculty there are sometimes discounts available; which can make the price more manageable.

Both work with the best screenwriting laptops.

While both pieces of screenwriting software are excellent in their own right; we’d have to pick Arc Studio over Final Draft at the current moment in time.

This is mainly because you can run Arc Studio for free, and with the industry-standard formatting and fantastic UI, it’s a great platform for beginners as well. Finally, the industry is changing and alternative software is now more accepted as long as the script is formatted correctly and most importantly- is a nice script!

But it depends on what you’re looking for.

Which of these two programs do you prefer using to write?

Are there any key aspects of them I’ve missed?