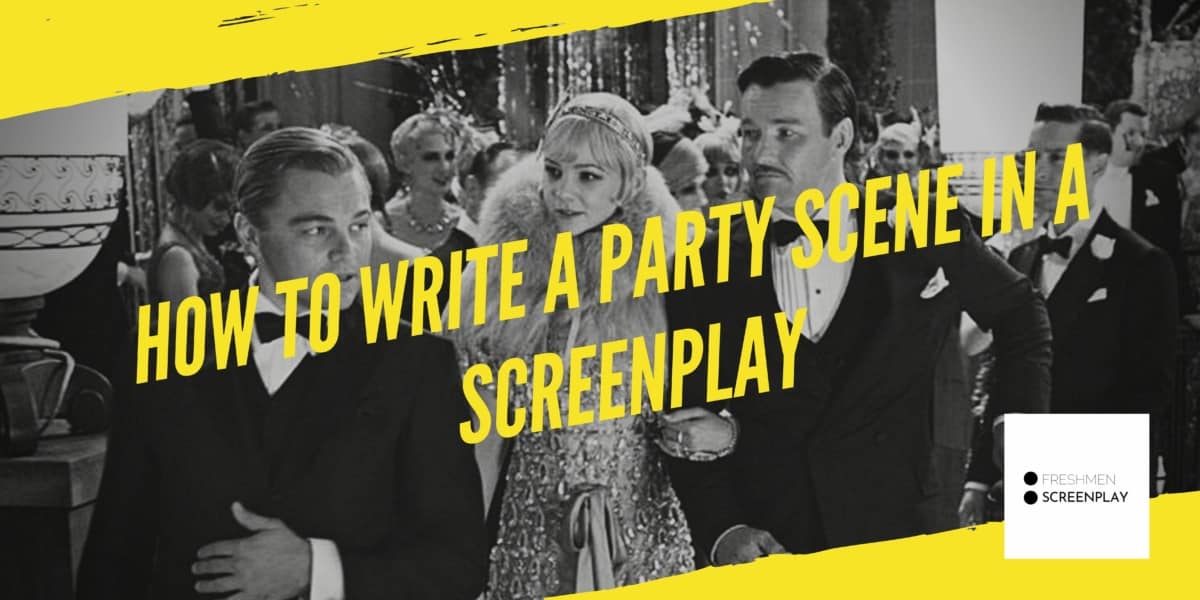 Did you know that 73% of movies made have some party scene? Whether that be a barbecue, dance party, sleepover, club scene, dinner party, you name it.

It’s a great way to see how your protagonist reacts and responds emotionally in an environment with many unfamiliar people. It puts pressure on your character and is responsible for a lot of amazing scenes in movies.

Notice how the above scene description of the warehouse party shows where people are in the building.

“On the dance floor, to the right, on the left, and at the bar.“

You want the reader to see everything, like a real estate pro showing a house to a couple.

Did you notice I didn’t say everything that’s happening?

I didn’t go into copious amounts of detail about what’s happening with the DJ, bartender, outside, etc. When describing a party scene or any scene with a large group of people, you only talk about the big important things.

Because this is a screenplay, not a novel.

Lastly, the emotion of the scene

I used action to show the craziness of the scene and to inform the reader of how long the people have been there.

They’ve been there for a while, and they are doing illegal things.

Everyone is enjoying themselves.

Short sweet and to the point.

Below we have a few examples of parties from screenplays. We are starting with the Matrix.

You can see how anti-social Neo is by his actions and how confident Trinity is by hers. I also like how they describe the people in the party by using “jungle cats” and “shadow-like figures.” This scene is short and to the point.

Here is how it translated on screen.

Next, we have a party at “The Wolf of Wall Street.”

Like I used in my example, this script also specifies where things are coming from. “From the kitchen.”

Let’s see the scene from the movie.

Whats the Purpose of a Party Scene in a Screenplay?

The purpose of a party scene? It depends on when it takes place.

There needs to be something that happens to lead to the next.

Why are you writing a party scene in your script?

What did you learn from this post that will help you write your scene?

How to Write a Party Scene in a Screenplay
Posted in Formating Help By D.K.WilsonPosted on November 29, 2021November 30, 2021Tagged party scene