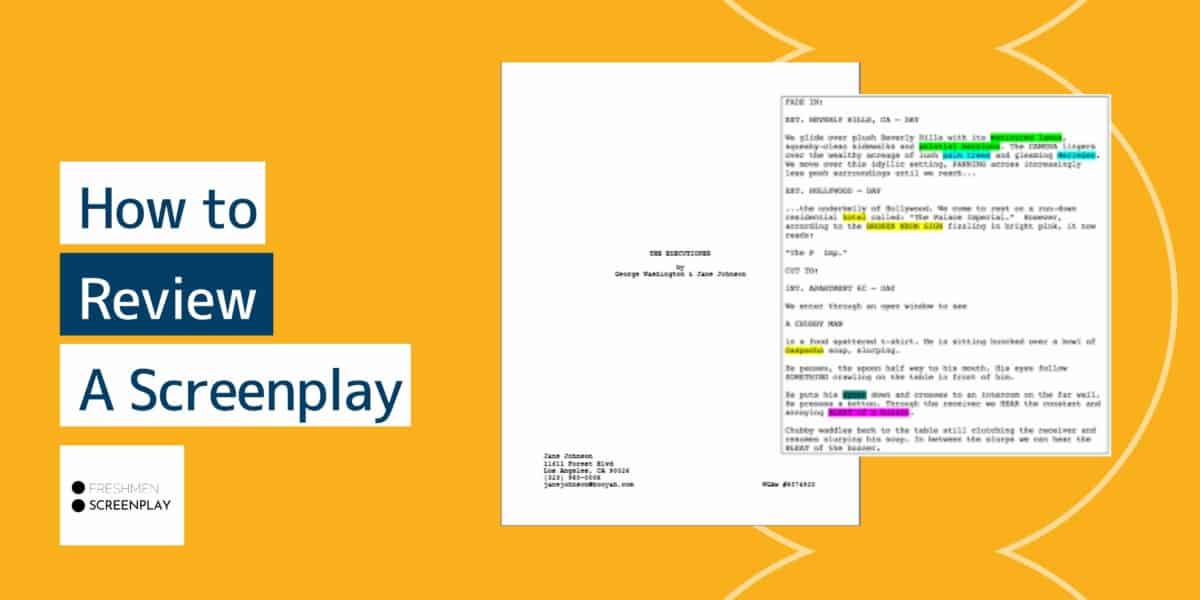 As a screenwriter, you need to be able to grasp several skills to write a top-level script, Including developing a strong sense of discipline, being receptive to criticism, and being able to rewrite, rewrite and rewrite!

How do you review a screenplay? You review a script by scoring the concept, story, structure, character, and dialogue and dividing by five to give it a score between 1-10. Some review services use Exellent, good, fair and poor as a baromentor instead of a number system.

In this post, I’ll show you these elements so on

By the end of this post, you will be able to:

⦁ Identify the features that make up a screenplay.
⦁ Understand how to evaluate these elements effectively.
⦁ Use this analysis to improve your script.

Key Steps to Reviewing a Script

Read the script first without thinking about it in a critical way. This is a vital step as it allows you to familiarise yourself with the story and the script without conflating it with critical analysis.

It can often be hard to switch off the critical side of our brains, especially for things we care about or want to succeed in but this is a helpful step to get a good first read in.

2.) Identify The Key Elements Of The Script

Familiarise yourself with the key elements that make up a script (listed above) and try to identify each area in the script your reading. Look for distinctive dialogue sequences and evidence of coherent structure, start to make notes on each area.

3.) Read Through Your Notes and Re-Read The Script!

Now you have some critical notes it’s time to read the script again! Why read it again? Well you now have the experience of reading the script for pure enjoyment and critical analysis, allowing you to make more informed and objective judgements about the content.

You can prematurely rate each element at this stage if you wish on a scale from 1-10.

Obviously not every script you review has to be in line with more advanced and professional script coverage but it will help to include some of the things used in it.

While this may seem like a lot to do, all of these things will help your analysis and understanding of the material.

This step can be tricky as sometimes it’s hard to define what’s objective and what’s more subjective, but in this step you should look at separating objective notes such as ‘dialogue overused for exposition’, from subjective takes like ‘the scene would have worked better in a forest’.

While the hypothetical scene could have worked better in a forest that’s more subjective and actually far less important than objective analysis like do the action lines flow well? Of course, nearly everything is subjective to some degree, but there are things that are obviously more objective than others.

Reading the script a final time is not a bad idea but also not essential here, you can actually over read a script which skews analysis, but the choice is yours.

Next you should add up your scores from each category and then reach an overall score. Based on this overall score you can determine whether the script is almost flawless or needs a lot more work- the specific description you assign to the script can be up to you or in line with any review template you are using.

All that’s left to do now is to either assemble your final notes and hand them to the author or take them onboard yourself if it’s your own script!

Now its time to talk more in-depth about each part of the screenplay and what you will need to grade.

The concept of a screenplay is often one of the very first ideas generated by the writer. This is oftenthe selling point; however, many writers rely on it too much; your screenplay is much more than the concept!

Having a common concept doesn’t necessarily mean your screenplay is terrible, but it does mean the other parts of your script need to be exemplary.

Movies like Inception rely less on having universally memorable characters because the concept is unique and intriguing. Overall the concept is not as important as other elements, but it should be something interesting at the least, even if it’s not unique.

Ask if this concept is unquie. Have you seen it before. Can you name movies like it or do you have to combine movies to understand it. If you do Its pretty good.

Plot and story are used interchangeably but they mean the same.

The sequence of events that happen one after another. Simple

The plot should be tight not one act, scene, action should deviate from the plot. If it does it better be interesting. Like insainly interesting.

You have to lead someone like you lead a witness in a courtroom. If when reading a screenplay you ask yourself why is this happening or nothing is happening that translates to a boring script.

This is why plot is so high up on this list and arguablely should be number one the reason its two is because people noremally start with a concept.

Each scene, act and character action should be setting up your characters to lead them to an ending that is surprising yet enviable.

It’s a common mistake to underestimate the importance of your characters in a script. Yes, high concepts such as Fast and Furious can get away with having less than memorable characters, but most screenplays don’t get that luxury and here’s why-

The characters are the projection of us, the audience, on screen-They are you from 15 years ago or who you may want to be like in the future.

Some of the most iconic characters ever created were terrible individuals.

Think Emperor Palpatine or The Joker from Batman.

Additionally, a character needs to be fully formed rather than just being an asset that serves the story progression. Introducing a character for the sake of a plot point is cheap and feels insincere, so this should only happen sparingly in good scripts.

Furthermore, there’s no point having a good story idea for the characters to all be similar to each other with no distinguishing qualities. A character’s quirks are often what makes us relate and empathise with them.

When reviewing a screenplay think about whether the characters got you invested or seemed real enough to relate to, if they didn’t, then it’s probably a bad script.

Give your characters realword problems people can relate too. This will make them understandable. And remember a character doesn’t have to be likeable.

Screenplay structure has been hotly debated for years, although one thing everybody agrees on is the importance of having some kind of structure.

Although there are instances where successful screenplays don’t do this, such as Memento and Pulp Fiction.

When reviewing a script just look for the basics of structure, such as inciting incident, midpoint and the climax, while also trying to distinguish between act breaks. It’s not always clear, but decent scripts should have these identifiable features.

Whatever strudcure you use There should be clear breaks between the beginning middle and end that signal different points.

The first thing most producers read is the dialogue. Its the easiest on the eyes and its the quickest way to tell if the writer is an amature or not.

However, it is a fundamental skill to develop if you want compelling characters.

When reviewing screenplay dialogue the best tip is to read it aloud. Does it flow? Are things like distinguishable speech patterns or vocabulary noticeable for different characters?

This will give you the best idea of whether or not the dialogue is good enough to keep you immersed in the story. Also, page long chunks of dialogue are usually just filler or exposition, so keep an eye out for that.

Only extremely talented writer directors such as Quentin Tarantino have mastered the ability to do this in a way that still works, although it’s more of a stylistic choice in his work.

If you speak dialogue out load and you trip changes are the writer hasnet thought about it.

And that’s how you review a screenplay.

What’s your process for reviewing a script?

Are there any key aspects I’ve missed?

Do you find it easier to review your own script or somebody else’s?