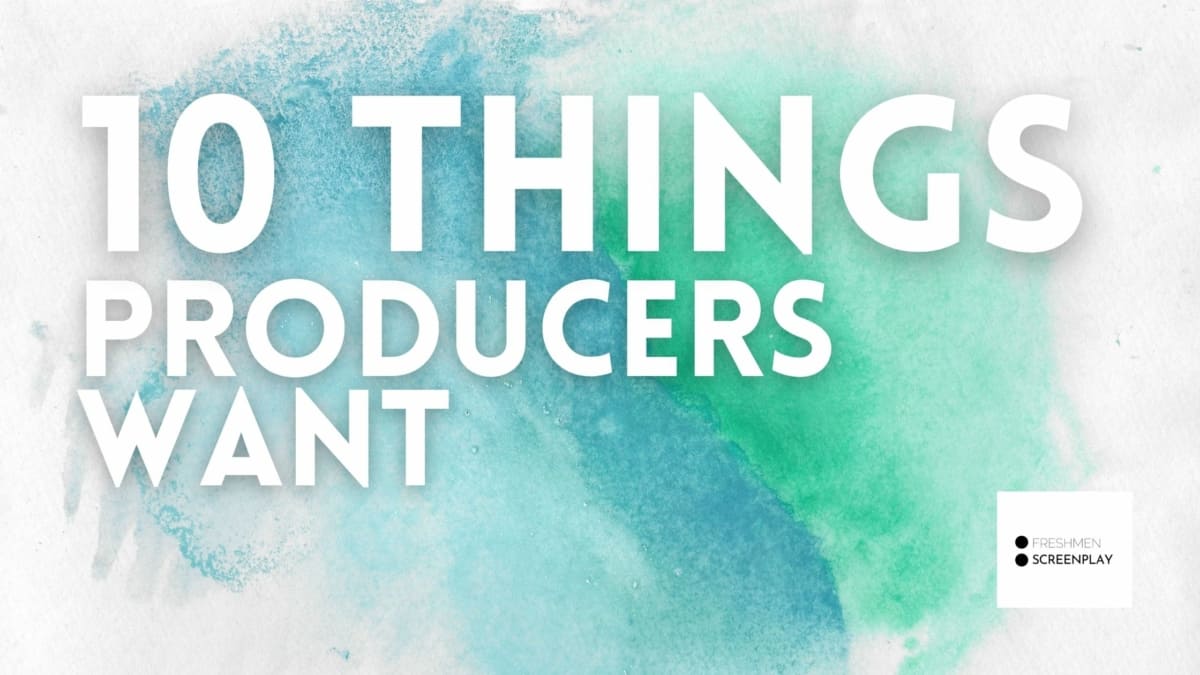 In the film industry, the people who can make or break your career in screenwriting are producers. If you can write a screenplay while keeping in mind what producers are looking for, you’re much more likely to have your script bought or optioned.

In this article, we’ll give you a list of the main things that will make a producer love your script and believe in its ability to be made into a successful film.

What does a polished script mean?

These are just the basics. Polished goes way beyond these things.

To name a few.

Please take a look at these screenshots from Raindance and how they rate your first 10 pages.

These are the things a producer needs to be free from when reading on top of being interesting.

Never rush the process of submitting a script to producers or production companies. One typo on the first page, and your script could be going straight to the discard pile.

Different strategies that can help you catch mistakes that you didn’t previously include:

If your script reads well enough that a producer can comfortably get through the whole thing, there are now other issues that they will think about. Namely, can this film sell? Will it be profitable?

One factor that shows a producer that a script could be a successful movie is actor appeal. This means that when the script lands on an actor’s desk, they’ll read it and see a role that they want to play.

In a producer’s ideal world, your script will have big-name, bankable actors fighting over it. So go ahead and write juicy, complex characters with interesting dialogue to make an actor itch to dive in.

For producers, the genre is essential.

Distinct genres have specific audiences. If a producer can clearly tell what the genre of your script is, they will know to who and where they can market.

Different producers will prefer different genres, but all will seek a film with a clear genre normally determined by the logline.

Your genre has to be apparent from page one.

So while you might be tempted to flex your writing muscle by defying genre conventions and mixing different genres, know that doing this might make producers less interested in your screenplay.

Even if a producer loves your story and finds your script incredibly impressive, they will never decide to pick it up if the budget seems unreasonable.

Anything over 10 million. For a new screenwriter.

If you were Aaron Sorkin or David Mamet, a producer might be more willing to take a risk on a big budget.

A new screenwriter on the scene, it just wouldn’t be financially responsible for a producer to spend hundreds of millions or even over 10 million on your script if Get Out was 4.5 million; think twice before submitting your 1900’s epic.

This means that, in addition to being able to be made for a reasonable budget, producers prefer scripts that aren’t going to cause them too much of a headache. This means a logistically feasible script that can be shot within a reasonable time period.

So if you want your script to have producer appeal, try avoiding the following elements, at least to whatever extent you can:

This isn’t exactly on the level of your script, but it’s worth mentioning anyway. A producer is not going to pick up your script if you’re a nightmare to work with.

Because the collaboration process between producer and writer can last up to a year or longer, producers want to buy scripts by writers that they will want to work closely with for an extended period of time.

This means that as a writer, in each of your interactions with producers, you want to make a good impression and put your best foot forward. Make it clear that you will be easy to collaborate with as opposed to difficult or stubborn. In short, be the lovely person that I’m sure you are.

High concept is a term that has been thrown around the industry more and more in the last couple of years. It means something that is easily explained and understood without any questions asked.

How do you know if your screenplay is high concept? Pitch someone and if they have no questions regarding the premise of the movie. That’s a sign your screenplay is one. But Don’t be satisfied with one pitch. Out of 30, how many didn’t understand the story? How long did it take you to explain it? The longer it takes, and the more questions asked, the farther you are away from this high concept term.

Some films that can be considered in this category are:

I can explain any of these films to my mother in 30 seconds. Even from the one sheet or movie poster, you can tell exactly what you’re getting.

One note, High concept doesn’t mean predictable it just gives the story an easy brain fog-free translation. Especially when in a pitch.

You might think that your script is so great that anybody would be willing to see it, but the truth is that having a clear audience – even if it’s smaller than the dream of “everybody” – can actually make your script more appealing to producers.

It’s much easier to figure out how to sell a film to teenage boys, stay-at-home moms, or children. So don’t hesitate to write a script that will appeal most to a specific audience. This can actually be your strength.

Pro tip: one of the best ways to have a clear market for your script is to write within a certain genre. (See tip number three above.)

9. A Script That Matters Now

Producers are business people. They are investors. They understand the current state of the world. In 2021 people want movies to reflect them and their current state.

Take a look at the movies being produced—the female lead, Superhero, Political, Racism.

Just 20 years ago, these types of films weren’t the focus of screenwriters. Now it’s hard to find movies about anything else.

Think about the current narrative today and how you could spin that into a movie. I’m not suggesting that you follow the trend, but take the trend and spin it in any direction you want. So don’t shy away from social issues or scripts related to the current moment in the world.

Some practical ways to think about this…

Like Michael Barker, Co-President of Sony Pictures Classics and the producer behind films like Crouching Tiger Hidden Dragon and Midnight in Paris, says, “I ask myself, ‘Will these characters and this story stand the test of time?’ and ‘Is this a resonant story at this moment in the world?’”

Last but not least is the issue of length. Because the truth is that your script could be groundbreaking or wonderful, but if it’s over 120 pages, most producers won’t even want to read it.

Not only will it be more of a time commitment than they really want to put into reading a spec script, but they’ll also think about the fact that audiences may or may not want to sit through a two-hour film (or longer!).

So if you’re submitting your script to producers, do your best to cut out all of the fluff and keep it to around 90 to 100 pages.

Keep in mind what Kristin Burr said. A producer at Burr! Productions and former executive VP of production for the live-action films at Disney “A screenplays that are over 120 pages long: It drives me bananas. I can already hear people describing the movie as slow.”

Write something producers can sell, but you are excited to create. It’s about them, not you.

Again it’s what producers want, not what you want. You will write and create ideas you want to put out in the world once you have proven yourself with a couple of scripts first. To be an artist is to be of service to others.

Which tip from today’s guide are you going to use?

What makes a script producible, in your opinion?