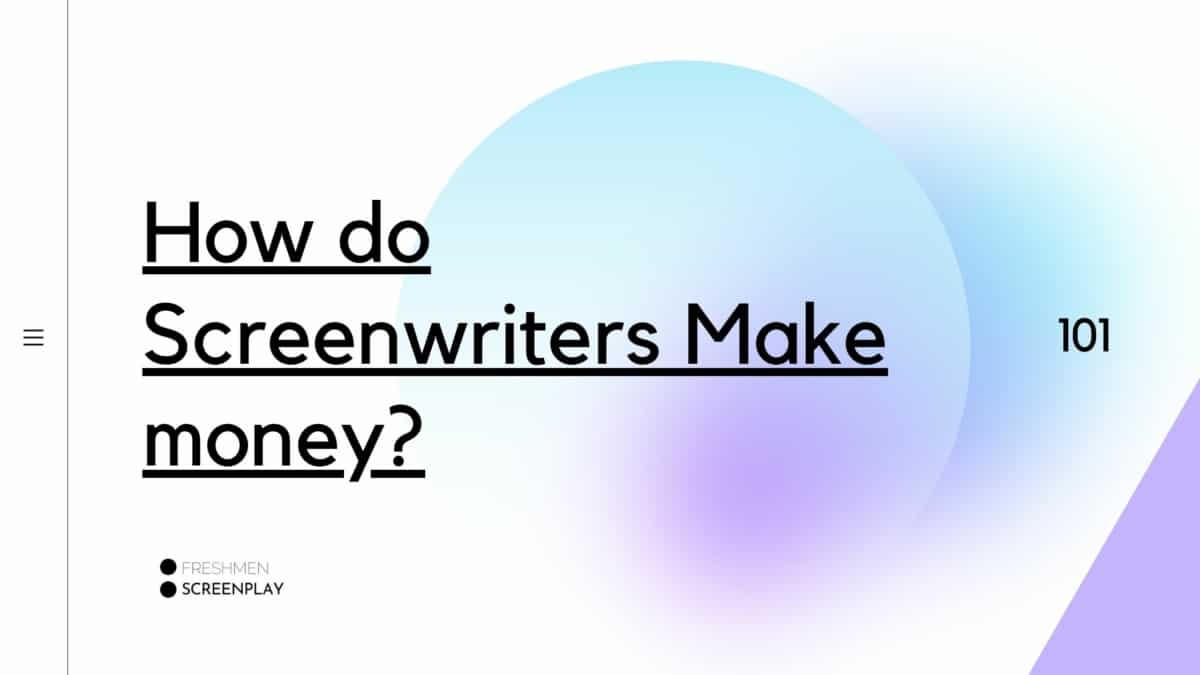 How do screenwriters make money?

In this post we’re going to tell you about each of these methods. Who knows, maybe you will find something else to do with one of those scripts you have lying around?

Why are option agreements first?

Because before they will purchase a script outright, a production company that buys scripts will option it.

This means that they will offer you a lump sum payment for the rights to produce your screenplay for a given time period. This time period is usually anywhere from 3-18 months.

The time period is there because they need to figure out the following:

The company is unsure if they can pull off the job of turning your script into a movie, so they option your script.

In return, you get paid 5%-10% of what would be the total purchase price if they were buying the script outright.

If they can find all the things they need to produce your movie or show, they will proceed with the production of your script.

A script can be optioned over and over for years, generating money potentially every year for the screenwriter. Once the option period is over, you still own the script. You can option it to someone else now.

Some writers earn a full-time living just from script options. 3-4 scripts in rotation year after year.

A typical script could sell for over $100,000. Four scripts like that making the rounds around Hollywood could be $400,000 a year.

Say your script is green-lighted. The buyer will now give you the big payment.

This could be in the hundreds of thousands or even millions you see a company shell out for the rights to a script.

It’s every screenwriter’s dream to sell their script that gets greenlighted!

A script that is being developed, generally backed by some IP ( intellectual property). This means it’s already been developed into a story.

Examples of IP being developed into other formats are:

A producer could hire you to adapt these books, comics, video game stories into screenplays, which is a hard job but pays well all the same.

And while some people are hired directly for this

There’s a second way you can get your hands on said project.

Say if a writer isn’t working out on a project. A producer could fire them and bring you in. Every rewriting of said script, you get paid.

Simon Kinberg was brought in to rewrite many scripts in his day. He claims that nowadays,

“they will have as many as five writers working on five different drafts of a script simultaneously.”

He doesn’t like it but for a new screenwriter, itching to do anything. You would most likely jump at this opportunity.

This type of opportunity goes to screenwriters who have proven themselves with a script, like what happened to Simon after Mr. and Mrs. Smith.

A Film Treatment or the outline of a script is yet another money-making opportunity.

This is where writers can get paid for their ideas because it’s a written idea for a movie.

The great news is you get just as much money for your idea as your first draft of the idea. It is again reserved for writers who have proven themselves with at least an agent or manager in front of them but are still a great way to make money as screenwriters.

What is assignment work?

When you’re brought in to start a script, a producer/ studio has an idea to develop. The reason could also be for an IP but also an original idea.

The average everyday screenwriter in Hollywood lives off assignment work. Polishing, writing treatments, outlining, Commercial scripts, anything that your agent throws your way isn’t an original idea of your own.

Yes, screenwriters do get a percentage of everything once a movie has been released.

Screenwriters get 1.5% of the distributor’s income.

It might not seem like a lot, but if a movie makes 20 million in the box office. 1.5% of that is $300,000. And that’s not including the Netflix deals, DVD, airplanes, online rentals that will come in from now until forever.

Just imagine a writer like Stephen McFeely, who wrote Avengers end game. You do those calculations.

One caveat this only applies to the writer with a final credit on a film.

So if you were brought in to rewrite and didn’t use your draft, you only get paid for the rewrite job and get none of the final distributor income.

Yes, there is a screenwriter salary, but it only exists on a TV Set. A writers room is where anywhere from 4 to 10 writers are given an idea to create an ongoing TV show.

You get paid on the regular like if it was a job. If that show were to be canceled at the end of the season, the payments stop, and the only one who gets rerun money is the person who gets the written credit on the show. Unless structured otherwise upfront.

Every way presented happens but not as often as you think. Only the top 1% of writers make any money at all.

Think about it. There are over 100,000 scripts written each year. Only about 400 movies get made a year. That means only 4% of those writers are getting paid, and some might not make not have made the 4% that year.

There you have it, the seven ways screenwriters make money.

As you probably noticed, most of these are given to screenwriters with already a history in the industry.

For a new screenwriter, the only two that would apply are the option agreement and the purchase. But after you get one of those, you are now a professional, and your agent could get you more opportunities like the other five.

What other avenues have you seen screenwriters making money?

How do Pro Screenwriters Make Money Today?
Posted in Industry Knowledge By D.K.WilsonPosted on July 19, 2021April 1, 2022Tagged How do screenwriters make money, money