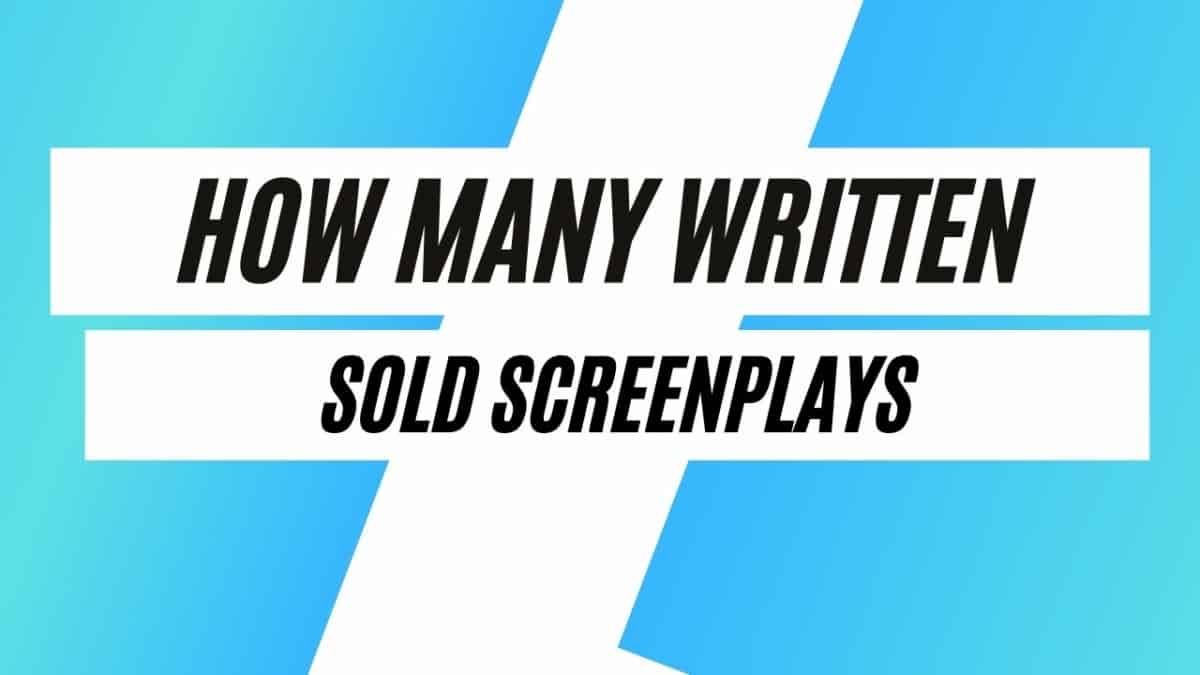 Writing your first screenplay helps to know that you are not the only one on this often-treacherous journey. It also helps to understand how high of a chance you have of making money off your screenplay once it is written.

According to The Writers Guild of America, 50,000 new screenplays are registered annually. At the same time, only 25 spec scripts got sold in 2020.

Those figures do not seem particularly encouraging.

But there are other factors to consider when adding up how many screenplays are written and sold every year.

How Many Screenplays Are Written Every Year?

There are so many circumstances that can influence a writer’s need to share that they are writing a script at all. Therefore, is it difficult to determine how many screenplays get written every year?

Based on WGA reports, roughly 50,000 screenplays (both spec and otherwise) get registered with the guild every year.

Of course, the WGA only covers America. It is not too far-fetched to presume that the actual number of screenplays currently in progress is considerably higher.

How Many Screenwriters Write a Second Movie?

WGA has roughly 20,000 members. These members are game writers, TV writers, animation writers, and feature film writers. So, the number of members does not solely reflect live-action scriptwriters.

Though 50,000 scripts get registered with WGA, that is not to say that those writers will continue to write scripts. Nor that every WGA is an active writer.

Check out Steven follows for more information on that.

So, it is hard to say who exactly is writing a screenplay. Or if every member of various guilds and unions will continue to write scripts.

How Many Screenplays Are Sold Each Year?

Another way of knowing how many screenplays get written every year is how many scripts get sold each year.

It is hard to determine the exact annual sale figures of screenplays. There are so many factors that come into play.

WGA determined that 4,760 of its members earned money from screenplays in 2016.

This included both TV and feature film screenwriters.

These figures do not report a successful script sale that year. Instead, 4,760 members received money because of their screenplays.

Scott Myers does an annual breakdown of the spec scripts that Hollywood buys every year.

Remember: a spec script is a speculative script written with the hopes of getting made. There are often no budget restrictions, so the writer can be as ambitious as they want.

According to Myers, in 2020, Hollywood only paid for 26 spec scripts.

This is a considerably low number, but it is essential to remember the context of 2020. Because of everything that happened, the film industry was challenging, halting the sales of many screenplays. However, Hollywood has slowly been buying fewer and fewer spec scripts since the ’90s.

A History of Spec Script Sales

How willing studios produce original ideas directly influences the number of spec scripts sold each year. If Hollywood is having a bad year or social shifts occur, studios will buy scripts from writers they know will make money.

Arguably, the rise of streaming services has made Hollywood even less willing to buy spec scripts.

The figures below show just that:

As you can see, 1995 was an excellent year for script sales, with studios buying 173 spec scripts. But come 2000, that number lowered to 92. Though there have been some good years like 2011, which saw 110 script sales, there has been a steady decline since the 1990s.

So, what types of scripts did make a sale?

Thriller seems the most successful genre, with eight spec scripts falling into that category. Comedy and science fiction each have five spec scripts registered as their genres.

Writing a spec script that crosses a couple of genres may be your best bet if you want to sell your script in 2022. 6 out of the 26 scripts brought by studios in 2020 were genre hybrids.

The more genres a script covers, the wider the audience will be, and usually, the more money a studio can make. Or perhaps the key to selling a script has a good script.

Hollywood brought 3 of the 26 spec scripts under competitive situations. A handful of others was also taken to auction, reaching up to 7 figure numbers.

This means that producers, directors, and studios through the scripts were so good that they had to compete to buy them—an ideal situation for any screenwriter.

If you are curious about the exact spec scripts sold, here are a few to look out for:

“In an authoritarian society that rose from the ashes of global destruction and where people’s lives are controlled down to the smallest detail, a young couple’s discovery leads them to start a rebel movement.“

“a single dad and NASA physicist who discovers a black hole that will strike the earth in a matter of days. The problem is that no one, including his colleagues at NASA, believes him.“

How Many Scripts Are Produced Each Year?

Just because a screenwriter makes a sale does not mean that their script will get produced in the same year or at all. Typically, Hollywood releases about 150 films per year. That figure is a mix of live-action, animation, and non-fiction films.

Though 150 sounds like a lot of films, when compared to how many scripts get written each year, it is not. Some figures suggest that only 0.3% of scripts get offered a chance of production. This chance may fall through for a whole number of reasons.

Whether it be creative differences or lack of funding.

Considering that Hollywood is comprised of several major studios, 150 films a year is not that impressive. Especially when compared to Netflix. As its own production company and streaming service, Netflix releases roughly 70 films a year.

If Hollywood studios matched Netflix’s production numbers, the industry would be far easier to break into.

Perhaps the best place to find production success, The Black List has a history of making writers successful. In 2005, The Black List composed an inaugural list. This list comprised 1568 scripts waiting for a producer to take interest.

As of 2010, 68 of those scripts had been made into feature films. That’s 4% of the list’s scripts that found success. Even if you don’t have an agent, it may be worth registering your script with The Black List. Any organization with production figures as high as 4% is one you want to get involved in.

To give us a better understanding of how many scripts are written and sold each year, tell us:

How many scripts have you written in your career?

Have you sold a script to a producer or studio?

Did you register your screenplay with a guild or union when writing it?

9 thoughts on “How Many Screenplays are Written and Sold Each Year?”