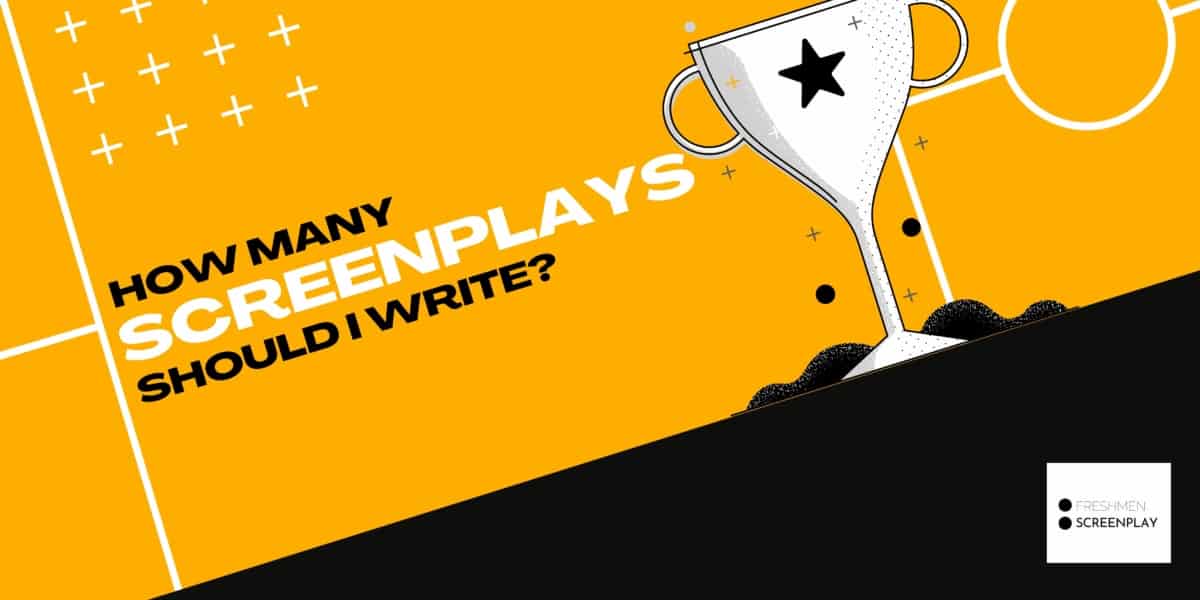 The screenwriting world can be brutal at times. It is straightforward to get downtrodden when you see others overnight success. Or when you are on your 10th feature script and still haven’t gotten hired.

So how many screenplays does it take to get hired? It is often recommended screenwriters write 5-10 features before they get good enough to obtain a producer’s favor.

But there is no absolute number of screenplays. Every writer’s journey to professional is different.

Every writer will have a different industry experience and connections that will change this number.

To find out the writing goals you should be setting yourself every day, month, and year, read on.

How Many Screenplays Does It Take To Get Hired?

Some have a close connection to the film industry and get hired with their first script. For others, it took more than 10 screenplays before Hollywood hired them.

Unless you have those inside connections already, don’t expect your 1st screenplay to be the winning script. Nor the 3rd… 5th, or even 10th.

Do not take that as a sign to give up writing altogether, though.

Treat every script you write as a stepping stone to improving your writing voice. You will only improve the more you write. So, keep writing, especially if your previous scripts are stuck on the shelf.

Mark Sanderson a good friend of the blog spoke about his screenwriting journey and how many scripts you have to write.

As of 2017, Sanderson had completed 33 feature-length screenplays since graduating from film school. He says that 17 of those were assignments paid for by production companies, while 16 were other projects.

In the same blog post, Sanderson spoke about writing his 4th spec script with his friend in Warner Brothers Studios. Of course, Sanderson was living in LA, surrounded by production studios. And yet it still took him five feature-length screenplays to get hired.

It will take more screenplay attempts to get hired for someone living the other side of the world from Hollywood with no inside connections.

How Likely Are Hollywood To Buy Your Screenplay?

A major factor that will affect how many screenplays you have to write is happening in the industry.

Ever since the 1990s, Hollywood has been buying fewer and fewer original screenplays. In 2001, 101 feature-length spec scripts got sold. But, in 2020, Hollywood only picked up 26 scripts.

There is a range of reasons that this number has been dwindling over the years. From a rise in streaming services, the fall of movie theatres to worries about making a profit. As much as it helps to look at successful screenwriters’ journeys, a new screenwriter’s will be vastly different.

To appeal more to Hollywood and production companies, be in the know. Keep up to date with genre trends, social movements, and industry contexts. Doing so will allow you to see which scripts you should be pushing and when.

To increase your chances.

It seems like a lot of writers are getting success with biopic-type films. Both King Richard and House of Cucci were first-time writers.

Even the streaming services are getting into the mix.

And after looking at what Hollywood has bought in the last years it seems we are in for a whirlwind of more of these. Stay on the lookout for a Tiger Woods movie.

What do all these movies have in common they are about people. Famous people with interesting stories. Snapshots of moments in history. Big moments we have never seen grace the big screen. And because they are public figures anyone can write about them.

How Many Screenplays should You Write In A Year?

You should write at least 1 new feature screenplay a year.

There is a range of factors to consider when deciding how many screenplays you can write in a year.

You may have personal responsibilities, or you may still be new to screenwriting. Your individual experiences, goals, and external pressures will dictate how many screenplays you can write in a year.

Less Jessup – a renowned screenwriting coach – advises that you should and for 1 new ready-to-market feature screenplay every year. Or 2 new TV pilots.

She stresses the importance of not spending too long on a screenplay. It is very easy to stick with the one screenplay for years at a time, trying to perfect it. But this time isn’t needed.

If you spend years on one script, then you have less of a chance of producers hiring you. Especially if they don’t like the story.

So, aiming for 1 feature-length or 2 pilot scripts a year will make you move on and write more screenplays.

How Many Pages a Day Should a Screenwriter Write?

You should write an average of one page a day of a script. Professional screenwriters sometimes have 12 weeks to write the first draft for a studio which equals about 1 page per day.

But it depends on your contract. Sometimes you might need to finish the first draft in 30 or even 60 days. But if you are able to write anywhere near 2 or even 3 pages a day that’s pretty good for a new writer.

Lee Jessup’s advice should be taken seriously. But even she acknowledges that everyone’s situation is different.
If you have children, then it is likely that you will have to limit your writing hours to the evening. The same goes for any job or educational responsibility.

Plan Out Your Script

Regardless of your personal situation, you should take the time to sit down and plan out your screenplay. You could jump into writing with no plan and hope for the best. Though if you have a limited time every day to write, then knowing what you need to be writing will result in more pages as you will know what you need to do.

Don’t just plan the outline of your script but also how long it should take to write. Set yourself a deadline and stick to it. Make this deadline realistic and consider your commitments.

Having a set deadline and a well-structured script outline will allow you to determine how many pages you need to write a day.

Your first few screenplays are going to take the longest to write. Even if you have written for other mediums before, understanding the rules and expectations will take time. Use your early screenplays to determine a writing formula that works for you. A successful writing formula will allow you to write faster and better-quality pages every day.

Christine Condrat has fine-tuned her writing formula to such a degree that writes an impressive 15 pages a day.

During an interview with Film Courage, Condrat explained her writing routine. She must reach 15 new pages every day and does not look back over her pages until the rewriting stage. This ensures that she is always making progress.

Condrat also spoke about the importance of planning to avoid creative burnout.

15 pages a day is very ambitious for any writer. All progress is still progress. So, if you can only write 1 page a day, that is still a page closer to finishing your screenplay.

Time to hear from you!

Seeing as everyone writes scripts at a different rate, tell us about how you write:

How many new pages do you write a day?

Do you have a yearly goal for how many screenplays you want to write?

What writing formula have you found to be successful?

2 thoughts on “How Many Screenplays Should I Write Before I Get Hired?”