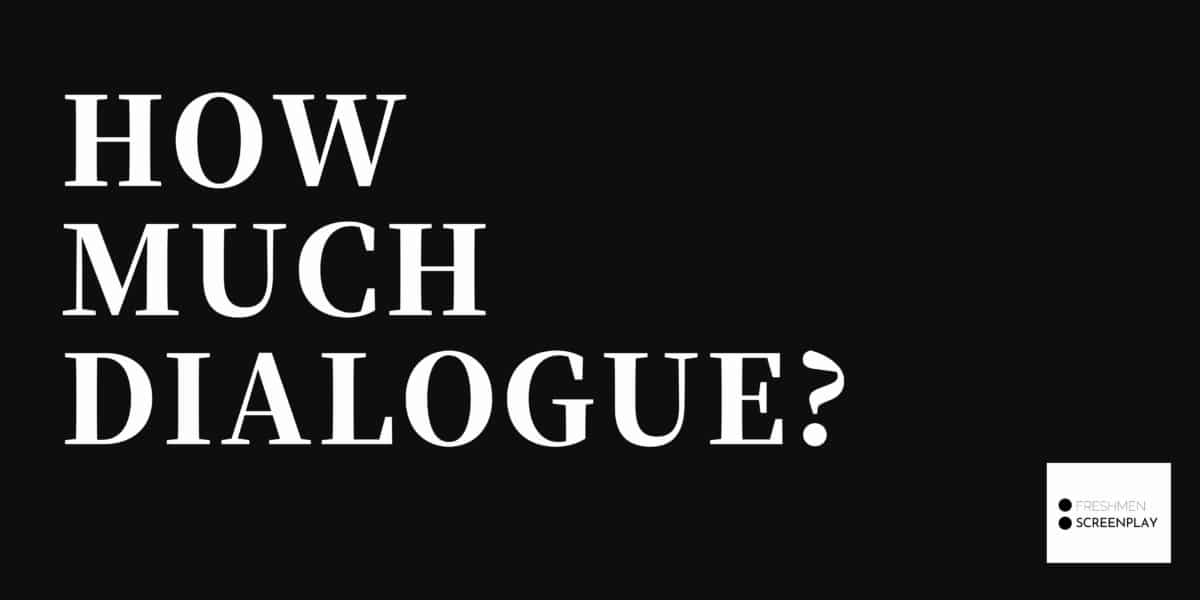 ‘Dialogue is an essential part of a play, important in a novel, and least significant in a screenplay. That does NOT mean screenplay dialogue is not important.’

Screenwriters should always be aware of how much dialogue their screenplays include. Too much dialogue could result in a lack of narrative. But too little, and your characters fall flat.

So, what percentage of your screenplay should be dialogue? WritersDuet advises that dialogue should take up 40-60% of a screenplay. This rule is consistent for any script (TV, short film, etc.) and equates to at least three lines of dialogue on every page.

When you know and understand the rules of screenwriting, you have the power to break them. In the case of screenplay dialogue ratios, you may find 40-60% to be too much or little.

Read on to find out what external factors will influence your dialogue and how to break pre-established dialogue rules in your screenplay.

What Will Influence The Percentage Of Dialogue in a Screenplay?

There will always be times when you need to break the rules of screenwriting. One of those times may be the amount of dialogue you need to write in your screenplay.

But do not break dialogue rules for the sake of it.

In his article ‘Show Don’t Tell: When To Break The Rules Of Screenwriting,’ Jacob Krueger discusses the use of dialogue in When Harry Met Sally. As described by Krueger, the When Harry Met Sally screenplay is full of monologuing and showing, not telling.

Yet, it works. Why? The film is all about telling stories to one another. So it has a longer, more novel-like dialogue style that takes up a more significant percentage of the screenplay.

Different genres of screenplays will have varied dialogue percentage rules, too. It will entirely depend on the type of script you want to write and how much dialogue you include.

For example, in Whiplash, a movie about music. This is one of the pages.

On the other hand, action films will require more activity in their screenplays than dialogue. This is because the focus is on physical conflict rather than emotional.

The above extract is from Baby Driver. It has a moderate amount of short, snappy, back and forth dialogue. But surrounding that dialogue is heavy action.

On the other hand, drama screenplays will focus on the emotional tension between characters. Juno, for example, allows its characters to lead its narrative.

To whom you write your screenplay may also affect how much dialogue you include. A film aimed at children may need more narrative explanation through dialogue than a horror film.

Most screenplays will comprise of 3 acts:

How you pace your narrative through these 3 acts will influence how much dialogue you have in your script.

Scott Myers explains that the setup act may be very dialogue-heavy. This is because you will be introducing each character and their motivations to the reader.

However, if you have a very story set-up, then you may have a lower percentage of dialogue in your screenplay.

Most action picks up after the first act, taking over where dialogue would be. So a longer act 2 / 3 will result in less dialogue in your screenplay overall.

It may seem obvious, but the fewer characters you have in your screenplay, the less dialogue there is likely to be.

Life of Pi leaves Pi stranded with a few animals for most of the film.

Yes, he does speak during that time, but less so than if he had other human characters around him.

A screenplay that has a big cast will probably have a higher percentage of dialogue. More character voices will be developed and a bigger need for dialogue rather than action.

How Long Should Dialogue be in a Screenplay?

Every word of dialogue that you write should add to the scenes, characters, and story that you are writing. However, you should not be overly reliant on dialogue alone to do this.

A piece of dialogue should not be a monologue. The more concise you can make your script’s dialogue, the better it will translate to the screen.

Michael Ferris (a former Hollywood literary manager) has his own opinions on how long dialogue should last in a script. He says that for every page of the script, there should only be 3 lines of dialogue.

Though there will be exceptions to that rule, that is why he suggests you should aim to make 95% of your dialogue reach this goal.

While that provides some guidelines, it doesn’t really answer how long a piece of dialogue

Should those 3 lines be one after another? Or split between several paragraphs?

The best way to contain the length of your dialogue is to think of it as a tweet.

Consolidate your dialogue into 140 characters per turn. This will make you evaluate whether what a character has to say is important or not.

If it is, then you will be able to find a way to make it concise.

Struggling to fit dialogue into 140 characters? Have fun with different synonyms, turns of phrases, and slang.

How To Make The Most Out of Your Screenplay’s Dialogue?

Regardless of what type of screenplay you write, dialogue serves one purpose: to express the character.

How your character presents themselves, their reactions to their world and other characters. You can tell it all through dialogue.

It is important when writing dialogue to make full use of subtext and context. They are what makes dialogue interesting and dynamic.

As it is easy to misunderstand what context and subtext mean, here are some quick definitions:

Your characters will not need to explain themselves in every scene.

In fact, it is better if you don’t have your characters explain themselves. This will force you to show a character’s motivations rather than tell them.

It is enough to have your characters react to the world around them through speech rather than justify their environment.

The more context you can fit into the rest of your screenplays, the more concise your dialogue can be.

That is why the showing not telling mantra is so prevalent in screenwriting communities. Show your reader what is happening in the world of your screenplay. This will make what you tell your reader through dialogue more effective.

The best way to learn how to write effective dialogue is to read other screenplays. Compare

how these screenplays translate onto the screen and see how effective the dialogue is.

Remember, as Scott Myers says, “dialogue is a conversation with a purpose’.

If what your characters say doesn’t serve the story or their own relationships, then they don’t need to say it at all.

Do you have your own rules when it comes to keeping dialogue short and sweet?

What are your favorite screenplays that make full use of their dialogue limits?

whatever your answers are let’s see them in the comments.