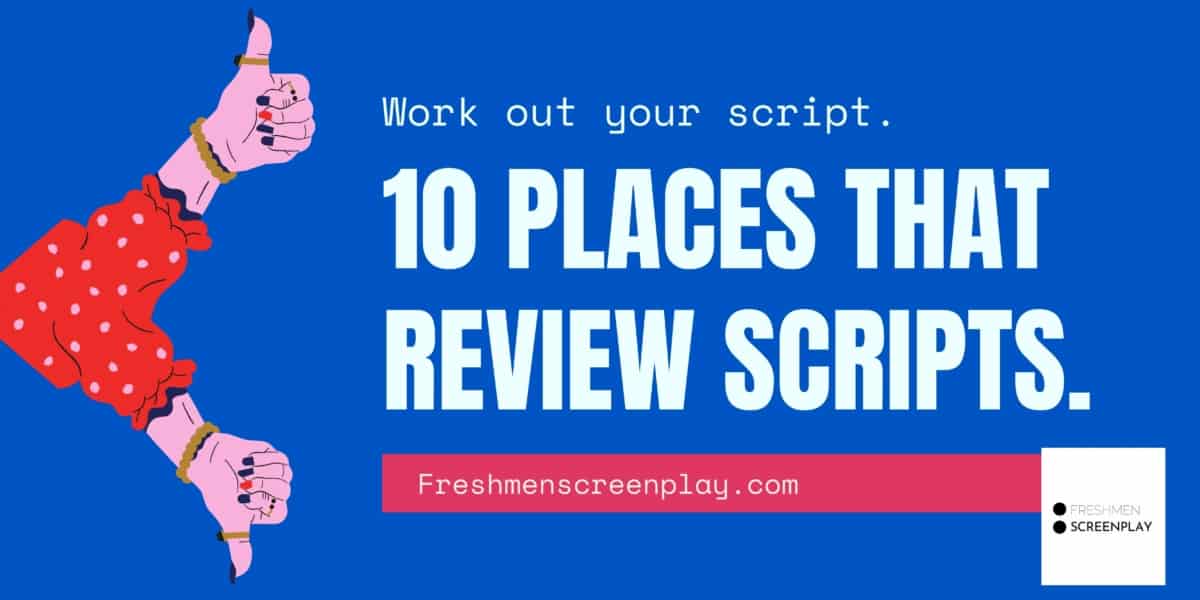 You’ve finally written a great screenplay that you’re proud of.

So, what’s the next step?

While most people claim you can only get meaningful feedback if you have Hollywood connections or an agent, this couldn’t be further from the truth:

In this post, I will showcase ten great places to get your script reviewed without the need for any experience or connections.

Best of all, they’re all online and straightforward to use.

This list is in no particular order, but rest assured every critical thing to note will be included.

By the end of this post, you will have:

The Black List is an online platform that acts as a place for screenwriters to upload and review scripts. It was created in 2004 and has featured an annual list of the best-unproduced motion picture scripts since 2005.

The platform’s overall goal is to shine a light on screenplays that may have been overlooked for various reasons. The site has even featured Oscar-winning scripts such as Juno and The King’s Speech in the past!

The best thing about The Black List is that even just being featured is almost a sure route to get more opportunities. The Blacklist features two separate sections, The Official List mentioned above and the community-reviewed database section. So yeah, it’s a pretty big deal.

The community-reviewed database section is the first and most accessible place to start.

Once you’ve paid the relatively small fee’s for hosting and uploading, your script will be rated on a graded scale of 1-10:

If your script scores an eight or higher, you have a good chance of seeing your script by an industry professional.

Scour through the list of scripts previously featured on The Black List, and you’ll be astonished by how many you recognize.

Several audience favorites start/end up on this prestigious list.

However, many of these scripts were written by people already in the industry-
which is unfortunately not the position many aspiring writers are in.

Don’t worry though, while the annual Hollywood list is more exclusive, the actual site features a paid-for hosting system where budding writers can upload and purchase a review from a Black List reader.

Sound a little confusing?
Fear not, it’s relatively simple once you get used to it, and we’ll go into the pricing in more detail later.

One inspiring success story was that of Jason Mark Hellerman, who invested $250 for hosting and reviews which ended up selling and producing his script a year later.

It sounds too good to be accurate, but it’s not.

He is now a professional writer and producer just a few years later.

It’s worth noting that if you’re already a member of the WGA (or your country’s equivalent), you aren’t required to host a script or purchase an evaluation- however, if you wish to, you get 20% off.

And if that’s not enticing enough, if you manage to score five reviews all over 8, you’ll receive a lifetime of free hosting on the website.

Script Reader Pro is a service comprised of a variety of script coverage features by a dedicated team of screenwriting professionals.

The overall goal of the website is to enable writers to take the next step with their scripts and receive professional feedback. One of the best features of Script Reader Pro is it’s highly personal.

Seriously, the feature of choosing a personal script reader/mentor is unique and adds a dimension to the service that you might not find elsewhere.

There is a dedicated feature on each team member and the genres they specialize in, allowing you to find the perfect match for your script.

There have been several success stories from using Script Reader Pro.

One of the most striking is featured on their website and regards to Antonio Cannady.

Cannady used his mentorship from the service to elevate his original pilot “Bad Press,” which in turn has ended up being optioned and produced by a studio with A-List talent.

Due to the sheer number of different services offered by Script Reader Pro, there is a huge discrepancy in the pricing.

However, we’ll list three of the services that we think have the best value for money here:

Industrial Scripts is a screenwriting consultancy agency that provides a huge range of services. Their content ranges from script coverage all the way to blog posts aimed at helping writers improve their craft.

The standout thing that they pride themselves on is having over 1000 verified testimonials-Making Industrial Scripts the most reviewed company in its sector.

If you’re looking for guaranteed quality script coverage then this is the place to go, the positive reviews speak for themselves.

One other useful aspect of Industrial Scripts is that they have their own annual screenwriting competition called The TITAN.

Impressively, Industrial Scripts actually has a dedicated verified review page-
You can see the overwhelming positivity for their service.

All of these services are great tools for aspiring writers, but the PDF script pack is of particular interest as it’s a unique package and an invaluable learning resource for screenwriters.

Fortunately, Industrial Scripts provide a handy graphic of their prices for script coverage:

They also state that script doctoring prices are taken on a case-by-case basis.

You can check out the rest of their site for links to online courses and countless other content.

Coverfly is a platform with the aim to bridge the gap between writers and industry insiders- Its aim is to get you noticed, and it’s FREE!

What’s great about Coverfly is that it is unique in the sense that it allows you to build a writer’s profile and track your progress on the platform. There’re several features as you’d expect, the standard coverage services but also something unique too-

The cool thing about coverflyX is that it’s a free service that enables users to exchange script notes with fellow writers using a ‘token’ system.

Every time you provide script notes for someone else you then earn tokens that enable you to submit your own script for review- It’s an innovative system that uses screenwriting skills rather than money.

Much like several other script coverage services, Coverfly actually features a writer’s success page, here are some of their recent successes:

What’s great about the success stories on Coverfly is that they are recent- and they feature each writer’s testimonial and Coverfly profile.

Nearly everything on Coverfly is free!

The only exceptions would be entry fees to linked screenwriting competitions.

It’s one of the few places where you can pitch producers face to face. It’s free to sign up to Stage 32, and once you do will allow you to browse and connect to thousands of industry insiders.

A great thing about Stage 32 is that they’ve partnered with Netflix. Several people have had success on the platform for this reason.

The Price Of Services vary dramatically due to the vast amount of them, so here are a few standouts:

The BBC Writers Room is one of the most renowned places for TV writers to get into. They offer two submission windows throughout the year, looking specifically for Drama or Comedy Scripts.

The great thing about BBC Writers Room is that it’s completely FREE!

If your script is submitted and makes it to a full read stage, you’ll receive detailed and invaluable feedback that may lead to more opportunities.

The BBC Writers Room has a great track record for developing new talent. They feature a whole page dedicated to bursaries, podcasts on success stories, and more:

Spec Scout is a website designed to discover and promote new or high-quality screenplays.

The best thing about this site is the simplicity of it all.

Simply submit your screenplay for a fee and then receive detailed coverage within 30 days. Three readers will read your script and subsequently assign your script an overall score based on certain criteria.

If you receive a script score of over 70 you will then be listed as a scouted writer, which pushes your work to the forefront of industry pros.

Best of all, even if your script scores poorly you still get crucial feedback.

The success stories on the site are plentiful.

One of interest is of first-time writer-director Rebecca Eskreis, whose script ‘What Breaks The Ice’ scored a 74, attracting two separate investments.

Now I know you’re probably thinking Reddit is a place full of internet trolls and weirdos- which is partly true, but…

There’s also a massive community of aspiring and professional screenwriters, all helping each other by providing feedback and advice.

This is a free, anonymous, and unfiltered platform where you can get genuinely honest and useful notes for FREE. While we’ve featured several pricier options on this list, Reddit is a tool that many will turn their noses up to, which is their loss.

The community is over 1,000,000 million members strong and regularly features’ script swaps’, guides, and much more. It is perhaps the easiest and quickest way to receive a review of your screenplay.

What’s awesome about Reddit is that the informal posting nature of the site means there are hundreds of success stories:

Seriously, just being a member of the Screenwriting subreddit will get you inspired!

I’m a screenwriter and producer who has spent the last 3 years teaching for totally free via this website site. Through my content alone I have helped hundreds of people get their scripts in the hands of producers in Hollywood.

The first 10 pages of your script analyzed via audio notes. Anywhere from 30 minutes to 1 hour. I will go through your script line by the line going over everything down to the verb.

This list should now have provided you with great options for having your script reviewed. While they all have different strengths, all of them will benefit you in one way or another.

Sometimes the hardest step is I’veing your work out there- however it is a necessary and crucial step. Hopefully, this list has given you the confidence and inspiration to make this step.

What are your favorite places to go to for script reviews?

How many of the places featured on this list have you heard of?

Is there anything else I’ve missed?

Where Can I get My Script Reviewed? (Script Coverage Places)
Posted in Industry Knowledge By D.K.WilsonPosted on January 10, 2022January 12, 2022