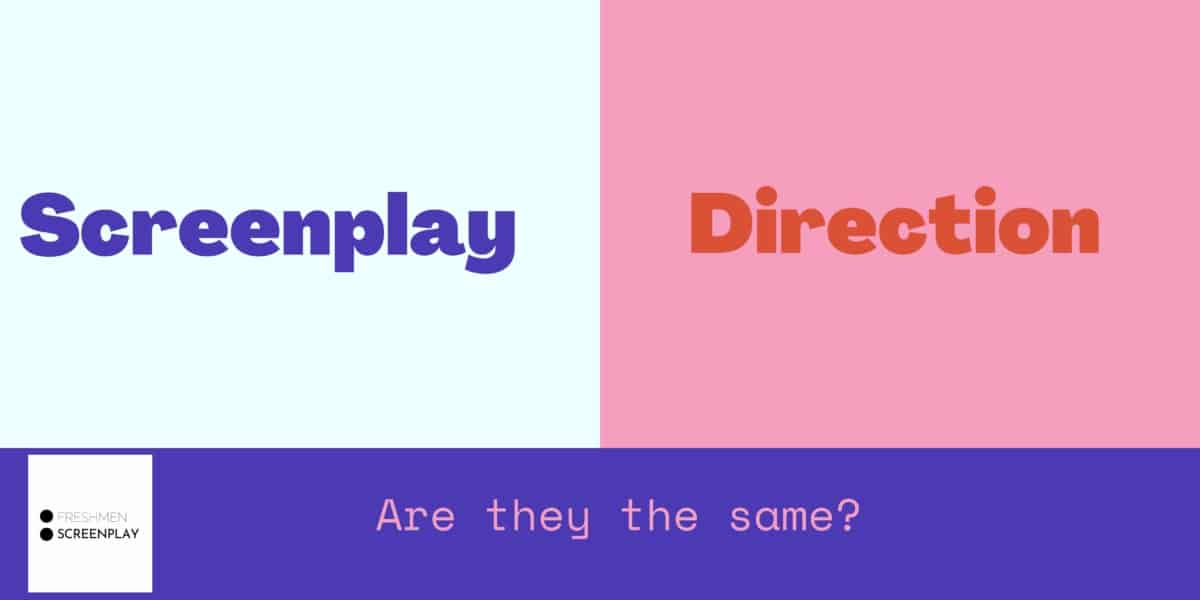 Understanding what’s required from each role is vital with so many moving parts of a film’s creative process. You don’t want to be stepping on any toes while writing your screenplay, especially not the directors.

Is Screenplay and Direction Same? A screenplay is the blueprint of the film. Direction is the orders given by the director during the film’s production.

Both a screenplay and direction, while different, play vital roles in bringing a story to life.

In this article, we will cover:

What Is The Role of The Screenplay?

A screenplay’s whole purpose is to map out and offer guidelines on how to bring the narrative to life. Without a script, there is no way for directors to picture the story they need to translate onto the screen.

Any department of the product needs to pick up the screenplay and understand what they need to do to bring that story to life.

For instance: the set designers need to know where a scene is taking place and the built environment.

The screenplay is also responsible for practical production practices such as:

Direction In a Screenplay

Screenplay direction is different from the direction given by a director.

It is less about telling actors what to do and more about describing the action around the dialogue. This includes setting the scene for set designers to interpret and explain essential props.

A screenplay’s direction should highlight focal points to the director, not break down every detail or emotion.

If a prop holds significance within a scene, highlight it within the action. Point it out as an essential prop to the director without telling them how to stage that prop.

This extract from Edward Scissorhands (1990) is an excellent example of direction.

The film’s production team could highlight the information they need from this extract and create a set that works for the story. The screenwriter isn’t telling the actor how to act or directing the cinematographer to shoot the scene. Instead, they describe the character’s general state as she enters and leaves the scene.

How To Write Script Direction

Practice using useful synonyms for words that offer little inspiration. This will emphasize how a character needs to appear to tell the story.

Instead of walking into the scene, a character could:

These words paint a clearer picture of the character is feeling without telling the actor how to show that emotion. The more compact the direction in a script is, the less likely you will fall into the trap of directing the director. Short, punchy phrases and avoiding large chunks of text will help you keep on track.

How to Format Directions in a Screenplay

It would help if you separated direction in a script from everything else. Bolds are used the most when reading other scripts. One way to make it stand out is by using those three methods.

Please look at the whiplash script to see how it’s done.

If a screenwriter describes what is happening, a director asks how it is happening. The director handles the whole production. They are responsible for leading the pre-production, shooting, and post-production teams. The director needs to interpret a screenplay and control its creative direction from page to screen.

They will do this by:

⦁ Directing the actors on how to play their characters to incite the best performance
⦁ Collaborate with cinematographers to develop a shot list
⦁ Instruct make-up, costume, and set building departments on how to follow their vision through

Take a look at this clip of Jay Roach explaining how he directed the opening sequence of Austin Powers In Goldmember (2002):

How To Direct From A Screenplay

The first task any director must complete is reading the screenplay. Understanding the story in full will allow for a better visual interpretation.
Every choice that a director makes needs to be intentional.

So, they need to understand every script detail before making any production choices. Then it is up to the director to bring that vision to life using the screenplay as a source of guidance.

Collaborating With A Director

There will often be times when a screenwriter needs to work with a director during the writing process. Both are required to make the foundations of a film. Where the screenwriter builds the story’s foundation, the director acts like cement, filling in the in-between details.

If you already have a script, you may not have a screenplay. Writing a story in a script format does not mean you have created a functional blueprint for a film.

Once a director or a producer has picked up your script, the director will work with you to make it into that blueprint. A director would have developed their creative vision of your script. They may require you to re-write scenes to adhere to that vision.

The director and the screenplay writer will have in-depth conversations about the story. But, if there is a complicated scene, then a director may still have questions.

Why A Director Will Change A Screenplay

Yes, more than likely, a director will change a screenplay. It may not be an entire act or scene, but a location or dialogue is often switched to fit production needs.

Whether through sponsors, funds, or loans, a film will have a set amount of money dedicated to each production department. If a script lays out a blueprint that exceeds that budget, it will need to be reworked. There is also the possibility that a director disagrees with the action within a scene.

Try to be open-minded when working on re-writes with a director. Not only will it be a more enjoyable process, but it will also yield the best results.

After all, everyone involved in a film wants to create a spectacular final product. And it all starts with the script.

Did you think screenplays and direction were the same?

The direction in a script can be challenging to master, so what tricks do you use to avoid directing the director?

Have you worked with a director when re-writing your screenplay?

If so, how did that affect your script?

Is Screenplay and Direction Same?
Posted in Formating Help By D.K.WilsonPosted on January 4, 2022January 12, 2022