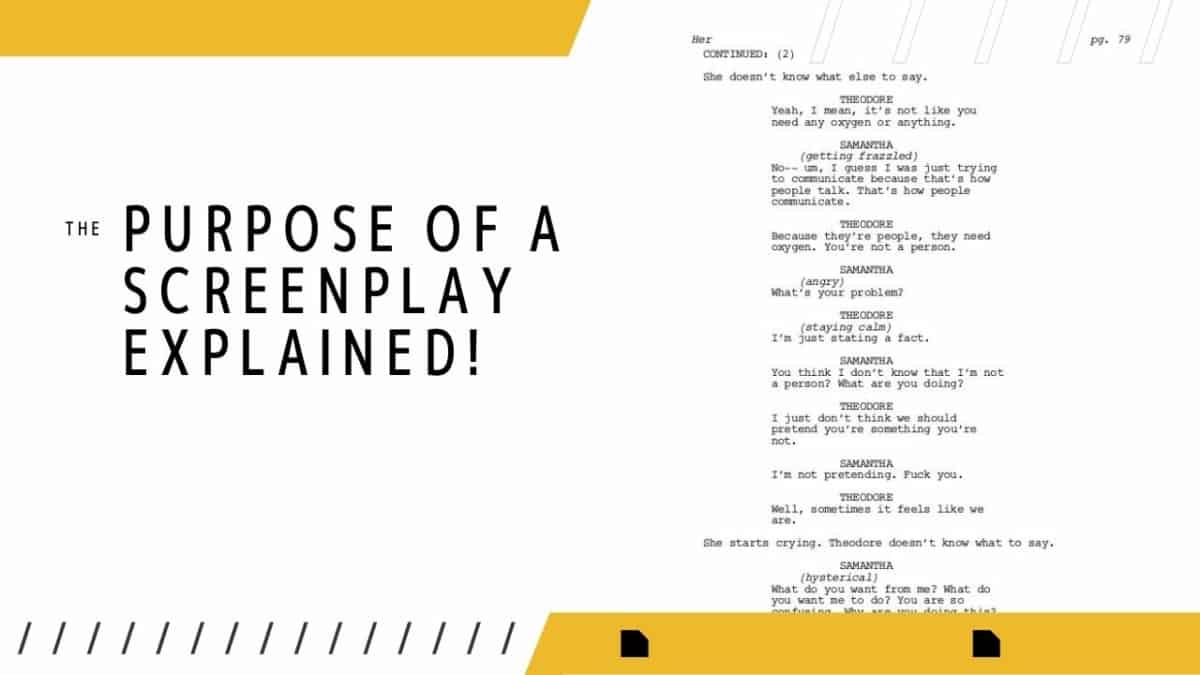 Screenplays can have many purposes depending on what type of script you’re writing. But we narrowed it down to a basic definition for all of them.

Without a screenplay, the director, producers, actors, producers would be making the movie up as they go. Leading to a longer time on set causing overspending and mismanaged time.

In this article, we will cover the various types of screenplays and why they’re created.

The Various Types of Screenplays and their Purpose

Your screenplay will go through different cycles of development while it gets produced. Therefore there are other purposes for each script you will write.

Remember, writing is not a solitary process, so be open to mandatory comments and suggestions from the production team. They will be more aware of what is physically possible and what needs to be cut when filming practicalities.

Can a Movie Be Made Without a Script?

Yes, a movie can be made without a screenplay but those movies are normally made by low-budget filmmakers who can experiment with new ideas during the movie-making process.

When you spend millions of dollars just like a business you need to go in with a solid plan even if that plan should change you need to have structure for what you are going to do.

Two popular movies made without screenplays are:

This is an example where even though this movie was excellent it costs more money than needed because of the filmmaker’s lack of preparation in creating the entire script beforehand.

Here is Russell Crowe talking about it.

This is a role that is entirely improvised. Meaning that the lines were not written, no script, and the actor and the audience experience everything together at the same time. Unlike Gladiator this was intentional.

The Difference Between A Script And A Screenplay

You will find that in the film community, script and screenplay are used interchangeably. However, it is essential to know the difference if you want your screenplay made into a film or TV series.

A script is nothing more than words on a page telling the actors what to say. It offers no accurate indication of how the writer visualizes the story being shot.

Screenplays are intended to be used as a visual tool, laying out a clear direction and scene that the production team can then interpret into a moving image.

For this reason, a screenplay has a life beyond the words on the page, whereas a script dies the moment the actors speak the words.

Time To Hear from You!

Do you now see why screenplays are important to the filmmaking process?

Are you trying to become a screenwriter?