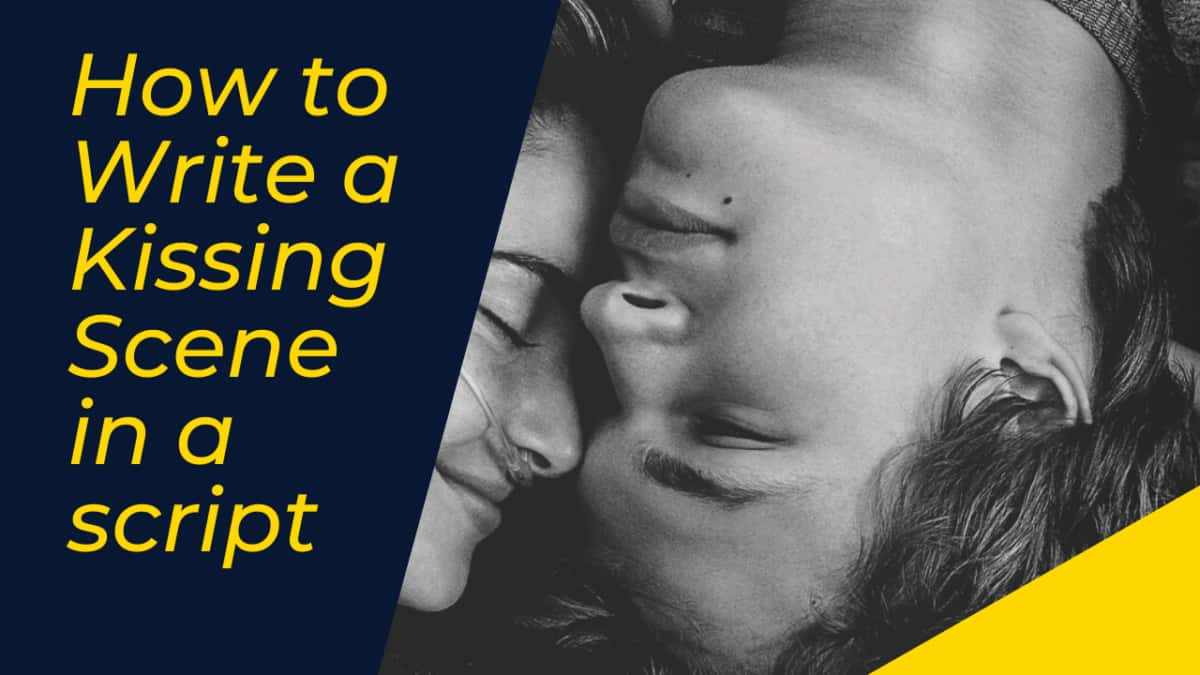 So, you’ve got the perfect story laid out before you. There is drama, angst, and an ideal resolution… but it’s still missing that tinge of romance. Your script is missing the kissing scene.

How to write a kissing scene in a screenplay? You can generally write “They kiss.” It’s what leads up to the kiss that makes a good kiss scene for a script, not the actual words.

More on that later.

This post will give eight tips on writing Kissing scenes in screenplays that most people miss and give actual kissing scene examples from scripts accompanying the movie scene themselves.

So you can write your next kissing, whether that be a peck on the cheek or a long tongue-twisting mess in the back seat of a car.

1.) Decide What Does Each Character Want?

Deciding what everyone what both parties want out of the romantic situation.

Think of what both parties want. That will lay the foundation for the kiss’s look and feel for the reader.

Take a look at this scene from Love and Other Drugs:

What do both of them want? Escapism. So how did the kiss look? It looked like they were both in it for themselves. Selfish, rushed, at the moment. Now I know this goes way farther than a simple kiss, but the same principles apply.

Finding out what they want will inform how you write the kiss. The amount of touching or awareness needed. This isn’t just the most important thing to realize in kissing scenes but all scenes.

2.) Build Tension with Action Before The Kiss

Action is more important than dialogue when it comes to everything in screenplays. They are the words between the words.

Try to write your kiss scene without any characters speaking and actions first.

Here is an example from the movie Catch and Release:

Do both of your characters want the kiss? If there is an unrequited love dynamic, then your kiss could be cringe, maybe even upsetting.

Or, if your characters are finally reuniting after a life-threatening event, then the kiss is going to become more desperate, relieved.
You don’t have to jump straight into the main event either. Take time before the kiss to set the scene. Use dialogue to help control the direction of the scene, express what your characters are feeling leading up to the kiss.

When learning to write from a professional screenwriter, I found out never to use adverbs. Adverbs are a waste of space in the reader’s head and slow down the story’s pace for producers.

So how do you describe kissing scenes?

Make up your verbs.

This paints images in the producer’s head, engaging them into the story and keeping them from skipping.

This is from a feature I wrote called Sins of The Father. this total was half a page in length.

There is no need to go into full detail about how your characters are locking lips, but their body language and reactions will help you translate the kiss better.

Shirt grabbing, hand-holding, or even staying completely still are actions that explain themselves. You don’t want to micromanage your actors by telling them what they are feeling, so describe what they are doing.

Remember what genre your script is to strike a delicate balance between being too stuffy or obscene scene when you write your kiss.

A sci-fi film will not necessarily be as driven by a kiss as a rom-com is, so there is not as much need to go into detail when writing your kiss.

Also, consider the scene’s setting. Where does the kiss happen? Is there significance to the place? Is the setting romantic or chaotic?

A kiss taking place in the middle of a battle is going to be much more desperate than that of a wedding kiss.

Let’s break down a few examples of kissing scenes in popular films and figure out why they are successfully written.

1.) The Fault In Our Stars Kissing Scene

Here’s how it played out on screen.

This is the scene where that relationship finally comes to a head.

There are hints to earlier points in the movie where the writer plotted their eventual kiss, e.g., ‘the same way she watched him on the airplane.’

The tension continues to build even though the scene via unbreakable eye contact – ‘it seems to last for a small eternity.’ Here the writer does not dictate the actors’ exact expressions but instead states that it should be intense.

As for the actual kiss, there is no denying that this is a kiss that has been a long time coming.

The passion and the metaphorical description that helps to convey what kind of kiss is taking place.

The scene closes very nicely, too, with the main character’s voice-over honestly expressing how she feels. The dialogue does not take us away from the scene or the event’s intensity but adds to the emotion.

2.) Pirates of the Caribbean Kissing Scene

Let’s now see it on screen.

This Pirate of the Caribbean scene: At World’s End perfectly contrasts the romantic kiss scene in The Fault In Our Stars.

Due to the ongoing battle, the kiss is not the scene’s focus but a neat detail to summarise Will and Elizabeth’s relationship.

There is a constant tension leading up to the kiss as Will and Elizabeth fight for their lives.

Then the kiss itself is written as ‘they kiss.’ But, the dropping of the surrounding sound creates a magical moment between the two characters, so the words carry themselves.

Time To Hear From You

Are there any tips that you have for writing the perfect kissing scene?

What are your favorite kissing scenes from any film or TV show?

What is it about that scene that makes it so rememberable?

How To Write A Heart-Pounding Kissing Scene In a Screenplay (Tips And Examples)
Posted in How to Guides By D.K.WilsonPosted on December 9, 2021December 9, 2021Tagged kissing scene