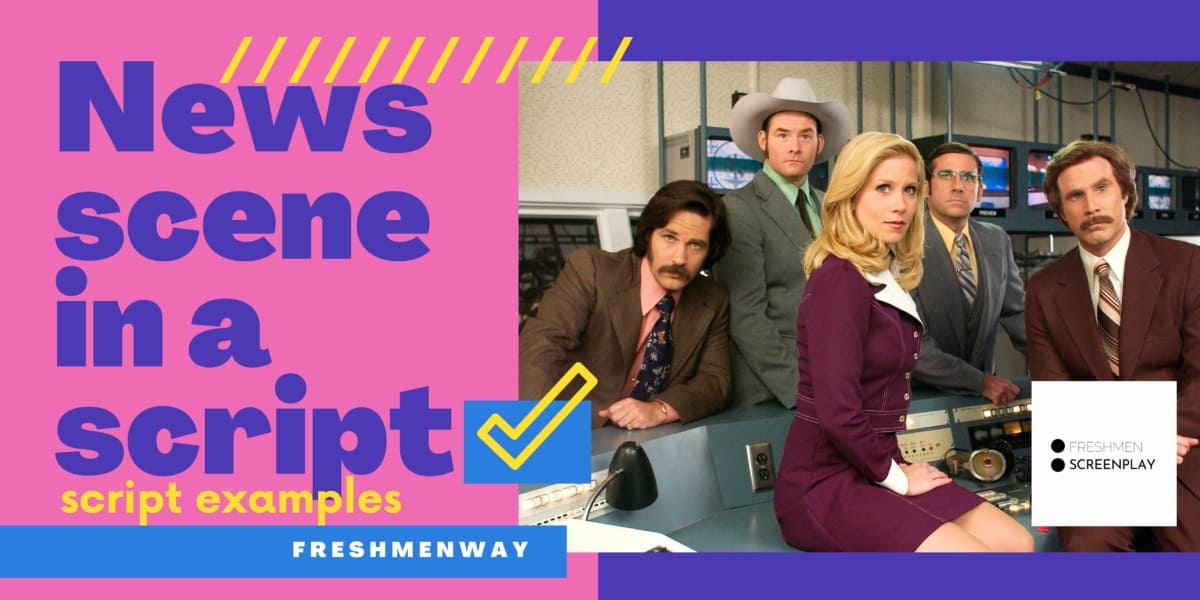 I recently got crucified for writing my News scene in my screenplay by my professional screenwriting coach.

Because of three mistakes, I made that I will lay out for you step by step so you can avoid them.

This article will go over the dos and don’ts when writing a screenplay news scene.

When a character is watching the news.

When your character is listening to the news.

One thing about these two scenes that involve announcer-like people is they are both short. They give you quick information. Not dragged out long.

This is what my coach taught me to do.

I first had long-winded dialogue sequences of what the people on TV were saying, but as a surprise, this was boring to producers. No one cares unless your Ron Burgandy.

Seriously unless you are writing a movie or tv show about news reports, keep it short and to the point.

Think about the information you need to get to the reader and end it.

How To Format A News Scene

There are a few ways to format a news scene in your screenplay.

In the above examples, I’ve shown you a couple already. As my coach taught me, I tend to write what’s happening in the description.

And to be clear, there is no right or wrong way to format this.

But make sure you do the following:

How To Format A News Montage In A Screenplay?

Using a montage in a screenplay can often lead to many confusing questions, never mind a news montage.

But honestly, it is not as complicated as some may think. Let’s write one together.

First, you want to set your scene as you would any other scene.

Here is where we are going to insert the news montage.

You want to clarify that a montage is taking place and not just a series of inter-cut shots.

Now, you can get as creative as you want! Have newspapers flying at the screen, write some fast-paced shots of various news broadcasts, go wild!

Once you are satisfied with your montage, make sure to let the reader know that it has ended with a simple:

Then carry on writing the rest of your screenplay. Congratulations, you’ve just written your very first news montage!

Why Write A News Scene?

As a general rule, a scene should only exist in a screenplay to help move the narrative forward. A popular way is to divulge necessary information via a news scene.

Its narrations and exposition.

A news scene is a pretty foolproof method of providing a character with anything they may need to know but use such scenes sparingly. It is straightforward to slip into a tell-and-not-show habit.

With that said, a news scene can fit perfectly into your narrative without you having to rely on it to provide important information.

If you are writing a crime screenplay, you may have your main character watching the news for any clues about the crime.

Or, if you are writing a superhero movie, you may have your hero re-watching news footage of themselves saving the day.

An Example Of A News Scene

The best way to understand how to write a news scene correctly is to study screenplays that have already been written.

Let’s look at a popular script that utilizes its news scenes almost perfectly.

Of course, a film about a news anchor will have some well-written news scenes!

This particular scene takes place at a news studio, but the setup is still the same.

The scene header indicates that this is a news scene, and the dialogue used by Ron reflects that of an actual news broadcast.

If the writer were to pen this scene from the perspective of someone watching the broadcast on their couch, the scene would look something like this:

It would still be as effective but shift the scene’s focus from the news anchor to another character.

Time To Hear Your Thoughts!

What are the best examples of news scenes in films?

Why are you writing a news scene in your screenplay?

How to Write a News Scene in a Screenplay That Makes Sense
Posted in Formating Help By D.K.WilsonPosted on December 12, 2021January 2, 2022Tagged new scene