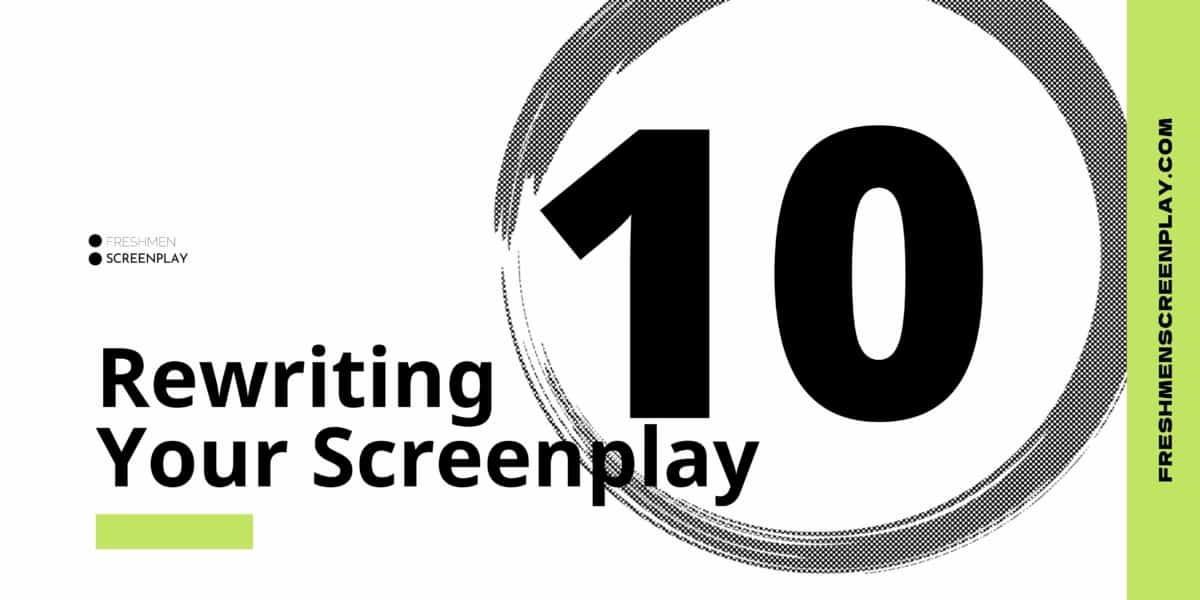 So, you’ve finished the first draft of your screenplay; what a milestone! Unfortunately, the work has only begun. Re-writing a script can be challenging, both emotionally and mentally.

But script re-writes are a crucial part of the screenwriting process.

It allows you to:

Follow this checklist of the ten things to do when re-writing your screenplay and see your script improve ten-fold.

1.) Get Your Screenplay Analyzed Before Rewriting

It will surprise you how beneficial it can be to have a second pair of eyes look over your script.

Family and friends are not the best people to analyze your script. They lack the industry knowledge and understanding of what makes a screenplay tick. Instead, hand your script to someone who will be able to identify production faults. Someone that can analyze your story and increase the chances of a producer picking it up.

This will help with knowing the expectations producers will have of your script. Not everyone will have easy assess to an industry professional analyze their script.

There are many services online that offer screenplay coverage services for a price. They will pass your screenplay onto an industry professional who will give you valuable feedback.

Here are some script coverage services you should consider sending your screenplay to:

Going into your first draft is okay, not considering any production-related limits. So long as you re-write it to fit the expected budget.

That big final fight scene that you have may not work on an indie movie. You may not always know what budget you need to abide by, but it would help if you had an idea of whether the story suits a small or large-scale production.

Special effects are expensive for any production company. Highlight scenes that require special effects and compare that to a film using a similar budget.

How realistic is it that those effects will be done?

How else can you communicate that action?

Scenes. You have to be ruthless when re-writing a script for it to improve. This means many scenes, dialogue, and even characters will get the cut. A scene is useless unless it adds; to the story, exposition, or conflict. Go through every scene in your script and ask yourself if it does any of these things.

If it doesn’t, don’t delete it.

As you rewrite the script, you may find that an omitted scene is valid again.

Your character should be the driving force of your narrative. Don’t try and re-work many characters at once. Take one character at a time and interrogate their role in your script. Take a scene that your character appears in and ask yourself what they contribute to the scene. You may find that a character fails to add anything to a scene. In this case, either re-write the scene or remove the character altogether.

Compose character sheets for each of your characters. Please get to know who they are, their relationships, and their contributions to the narrative. You will understand if you’ve successfully developed that character or not. A character sheet will also allow you to see the relationships you need to stress on screen.

Speak every line of dialogue out loud. It may sound blocky and unnatural, which you want to avoid. Consider if a character’s dialogue fits their tone. Please don’t make them say something because it needs to be said. Dialogue shouldn’t be too long. Any longer than six lines, and you are overkilling it.

A common trap to fall into when getting your script’s draft onto the page is telling, not showing. You don’t want to go overboard describing a scene’s location that isn’t showing. Emotion is the keyword here.

Showing is the character’s actions, the visual image of a character’s reaction. Take a look at a scene from The Handmaids Tale to see how June’s response in the scene is shown rather than said.

You do not have a screenplay if there is no conflict. If not, you have a narrative without conflict. When re-writing, note every bit of conflict and check which areas could benefit from more. The reader should come away from your script feeling like they have lost or gained something.

Another word for conflict I’ve discovered is problem. Every scene doesn’t have to have someone yelling at someone else, But you need a problem the character needs to solve.

Print out your script to have a physical copy to write on. Using different pens to re-write notes will clarify where you need to focus your attention.

Unless your reader can vividly picture the scene, your script won’t make sense.

Look at it as though you have never visited this world or ever heard this story. If you struggle to comprehend the words on the page, you need to re-write your descriptions.

I wrote a whole post on scene descriptions here.

As a screenwriter, the magic you have to do is to say a lot with a little.

7.) Skip the First Page When Rewriting

The chances are that you have re-read the first page of your script more than the rest of it. That makes sense; it is right there, after all. But don’t trick yourself into thinking that you have to start your rewritten the first page. There may be scenes that you need to re-work or a specific line of dialogue that you can’t stand. Either way, go in the order that best suits you.

No producer or agent is going to take an unformatted screenplay seriously. You need to prove your dedication to your craft and show a willingness to meet industry standards.

If you haven’t formatted your script before, take time to do so during.
Many screenwriting software available will automatically format your script as you write it.

Some top-rated screenwriting software is:

A rewrite isn’t just for spelling and grammar mistakes.

John August once said that to rewrite a screenplay, you have to decide ‘’what you want to accomplish”. Consider where your narrative ended and your goals from when you wrote that very first scene.

Have you met these goals?

Are they still the right goals to focus on?

If not, then find new goals for your script and focus every line you write on that goal.

Before starting the rewriting process, write a synopsis for the story you want to tell.
Refer to this as you figure out the purpose of your script to see where intentions do not align.

10.) Take A Break From Your Script

Once you have completed a first, second, tenth draft, don’t interact with your script for a while. Then, read your script back to front without any break.

It will feel more like you are the reader rather than the writer. This is what you want. It would help if you experienced the story for what it is to see the problems that it holds. Something hard to achieve when the script is all you think about.

Time To Hear From You:

Whats on your screenplay Rewrite Checklist?

Are there any tried and tested systems you use when ruthlessly cutting scenes?

Whatever advice you can give those starting the rewriting process for the first time would be a massive help.

Screenplay Rewrite Checklist 10 Things to Do
Posted in How to Guides By D.K.WilsonPosted on January 2, 2022January 12, 2022Tagged rewriting