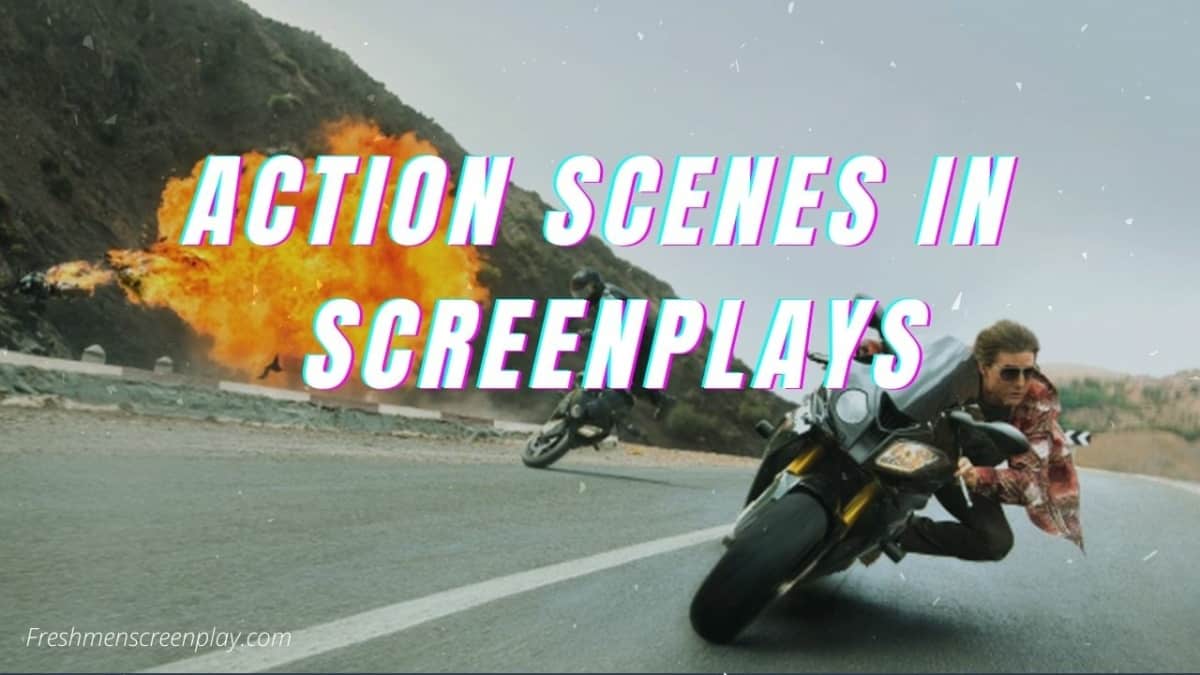 Any scenes that involve rapid movement to accomplish a goal for your protagonist.

What we will cover is:

We’ll answer all these questions and more below.

But first lets start with the broad strokes of writing an actions scene.

1.) An Action Scene Should have a Structured Arc

Like a screenplay as a whole, a good action scene has a story arc with a beginning, a middle, and an end. Even the coolest karate moves and explosions won’t make an action scene interesting if it doesn’t have a proper structure to keep the viewer interested.

An easy schema to follow for an action scene story structure is to introduce the characters who will be involved, making it clear why they are there and the stakes of the action.

Then the fight will have to escalate into the middle of the scene when the stakes are raised even higher, the hero appears to be close to losing or winning, the tension builds, and it’s genuinely unclear who is going to come out victorious.

Win or lose, what does it reveal about the characters? At the end of the scene, we have to see something about the characters that show their true nature. You can also conclude your action scene with one final, interesting beat to serve as a satisfying pin at the end of the scene. This can be a particularly clever line of dialogue, a callback to something you set up earlier in the scene or screenplay, a twist come-from-behind victory, or something else that will leave the viewer feeling satisfied.

If you noticed these are also tips for writing a scene in general.

That’s because the action scene is no different.

In the following clip you can see all three parts.

2.) Action Scenes must be Relevant to the Story

Another important element that is critical to include in an action scene is a connection to the larger story of the script.

Again, the scene can be the most exciting and breathless action scene in the history of cinema, but if your viewer doesn’t know why they’re watching it, it will take away from rather than contribute to their enjoyment of the film.

That’s why you should never write an action scene without knowing exactly why you are writing it and what it contributes to the script. Maybe the action scene is a good opportunity to throw in some characterization or world-building. Either way, it has to move the story forward and progress the plot. Once the action scene is over, there should be a change from how things were when they began.

Now, let’s talk about how to actually write an action scene in a way that it reads well on the page.

First, be mindful of the rhythm of your scene. What’s its pacing? Are you spending so much time on small details that it takes five pages to describe a minute-long sequence?

In fact, it’s best to avoid getting too far into the nitty-gritty of the exact moves your characters are making. After all, there will be a stunt coordinator on set to actually choreograph the fight.

Think about which moments of the scene you’re emphasizing. If there’s a particularly important part, you can use more detail to make it stand out more clearly in the reader’s mind. Otherwise, you can be more general.

At any rate, you should do your best to stick to the cardinal rule of screenplay timing: one page of script is equivalent to one minute of screen time.

You’ll also want to think about the dynamics of the scene. A good action scene has ebb and flow, moments of victory and moments of defeat. It won’t be interesting if your hero is just being beaten to a pulp the entire time without any wins of their own.

Do your best to avoid large walls of text, which are difficult, intimidating, and unpleasant to read and make a reader want to stop reading your script. Don’t be afraid of hitting the return key.

As you can see, the scene follows many of the principles we discussed above. Certain moments that aren’t as important to the story – like “[Trinity] drops the final Marine” – are described quickly whereas other, more important ones – like Neo dodging bullets – are described in clear detail.

A great technique to use in writing fight scenes that will make your script really pop is engaging all of the senses, especially sound. Don’t hesitate to throw in CRACKs and BOOMs and SMASHes. These will engage the reader and make the scene as exciting on the page as it’s meant to be on the screen.

5.) Break Your Action Scene up with Dialogue

Now, as you can imagine, a gunfight scene is probably not going to have as much dialogue as it does action lines. But you also most likely don’t want the entire scene to be completely silent, either. So if and when you do include dialogue, here are some tips to follow.

Allow your dialogue to be guided by the character’s motivation. Just like every punch and kick they throw, every line they say will be aimed at achieving a certain outcome. Instead of focusing on being clever and witty, try to think about why your character is saying what they are saying.

And think about the tone of your scene. If you want your action scene to have a bit of levity instead of being super intense all the time, dialogue is a great opportunity for some humor. On the other hand, if you want it to be scary and tense, you can include dialogue that amplifies that tension.

Kill Bill Volume 1 Halfway through the fight O-Ren continues to talk as if she didn’t break a sweat.

What tips do you have to share that could help action scenes?

5 Tips for Writing Action Scenes in a Screenplay
Posted in How to Guides By D.K.WilsonPosted on July 1, 2021July 1, 2021Tagged action scenes, fight scenes