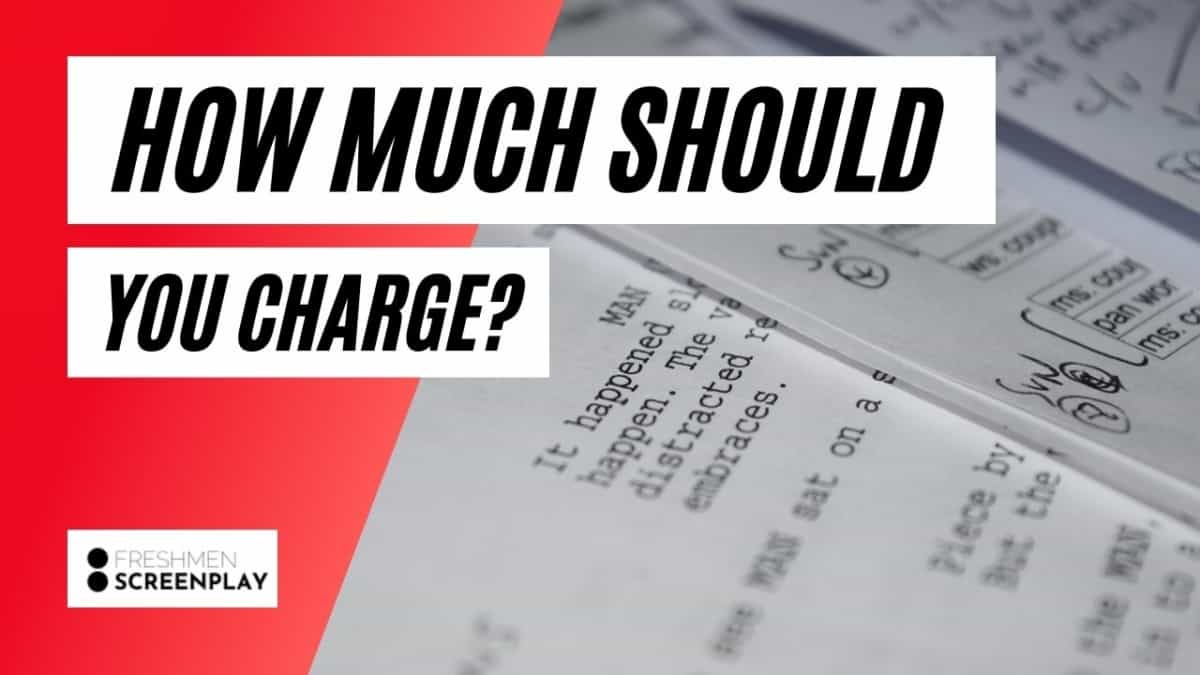 As a screenwriter, your ultimate goal is to be able to make a living from screenwriting. I’m talking money. So how much money should you charge when you’re lucky enough to be hired for screenwriting work? Just a heads up we will be answering the question for freelance screenwriters only screenwriters without agents or managers who need to gauge their fees as compared to the market.

In this article, we’ll tell you how much you should charge for:

How much should you charge for writing a screenplay? For a feature-length screenplay, the average is around $4,000.

Let me show you how I got to that number.

Now your price should be lower or higher depending on two factors.

During the research, we’ve found, freelance screenwriters who have been writing for more than 10 years and works at a vetted Hollywood studio, production company, or have had their screenplays awarded in one of the top screenplay companies have gotten gigs ranging $10,000-$15,000. But a freelance writer who has written a couple of features screenplays will be closer to the $500-$1,000.

And out of 30 professionals researched the averagenumber was around $4,000.

Let’s go over the complete ranges for all four types of screenplay writing work.

As you can see, the ranges of potential prices to charge for screenplays is quite large.

But what if you are a union writer what should you charge?

Charging for Screenplays a Non-Union Writer

One thing worth mentioning that you may notice is that the prices listed in the above table are pretty different from what the official screenwriter’s union, the WGA (Writers Guild of America) lists as minimum prices for their writers.

Here, you can see what the WGA requires its members to charge according to its 2020 Schedule of Minimums.

For more information on what you get as a union writer click here.

As you can see, these rates are much higher than those listed above.

If you’re in the WGA, your compensation will be very different, official, and may be negotiated for you by an agent or manager.

However, if you don’t have representation or WGA membership, you can consult the following information to help determine what you’ll be able to justify charging as a freelance screenwriter.

How Much Should I Charge for Writing a Feature Screenplay?

The $1,000 to $3,000 range is reasonable if you are more of a beginner screenwriter with less experience and qualifications. It may also be more appropriate if you are selling your screenwriting service on a platform like Fiverr, where it is standard for people to charge low prices. At this rate, it would be typical to offer fewer revisions.

On the upper side of the range, it is expected that you have quite a bit of experience, are open to offering multiple revisions, and are writing for somebody with more of a budget.

Other factors to consider include whether the screenplay is original or non-original. It’s standard to charge less for a non-original screenplay.

It’s also common to break up payment into installments delivered after the treatment, first draft, and second draft.

How Much Should I Charge for Writing a TV Script?

In addition to your level of experience and education, the biggest factor that you will have to consider when deciding how much to charge is the length of the screenplay. After all, a television screenplay might be only 15 pages long but can also go up to 90 pages and more.

So for the more standard television script length of 30 or 60 pages, you can stick to the $2,000 to $4,000 range. If you’re writing much less or more than this length, then you might go a bit above or below the range.

It’s also fairly common for screenwriters to charge more for a pilot – the first episode of a television show – than for subsequent episodes.

How Much Should I Charge for Writing a Short Film?

The two biggest factors you’ll likely want to think about when setting your short film prices are the length of the script and the film’s budget. Most short films are made on a much lower budget than features and TV episodes, often being produced independently and/or by students.

That being the case, it’s very common for short films to be created on a shoestring budget, meaning that their capacity for payment will generally be quite low. That’s why it’s even standard to charge as little as $100 for a short film script.

How Much Should I Charge for Rewriting a Screenplay?

Another type of work you might come across often is screenplay rewrites, for which you can expect to charge around $600 to $3,500. These prices will depend on the extent of the rewrites and the length of the script you’re rewriting.

If you’re just doing a quick polish of a short script, a few hundred dollars is a fair price. But if you’re rewriting a feature film from the ground up, don’t hesitate to charge closer to the rate that you would for writing an original feature film screenplay.

Even as a freelance screenwriter, the work you do is valuable and you deserve fair compensation.

Are there screenwriting rate factors you consider that haven’t been listed above?

How Much Should I Charge for Writing a Screenplay?
Posted in Industry Knowledge By D.K.WilsonPosted on July 8, 2021October 5, 2021