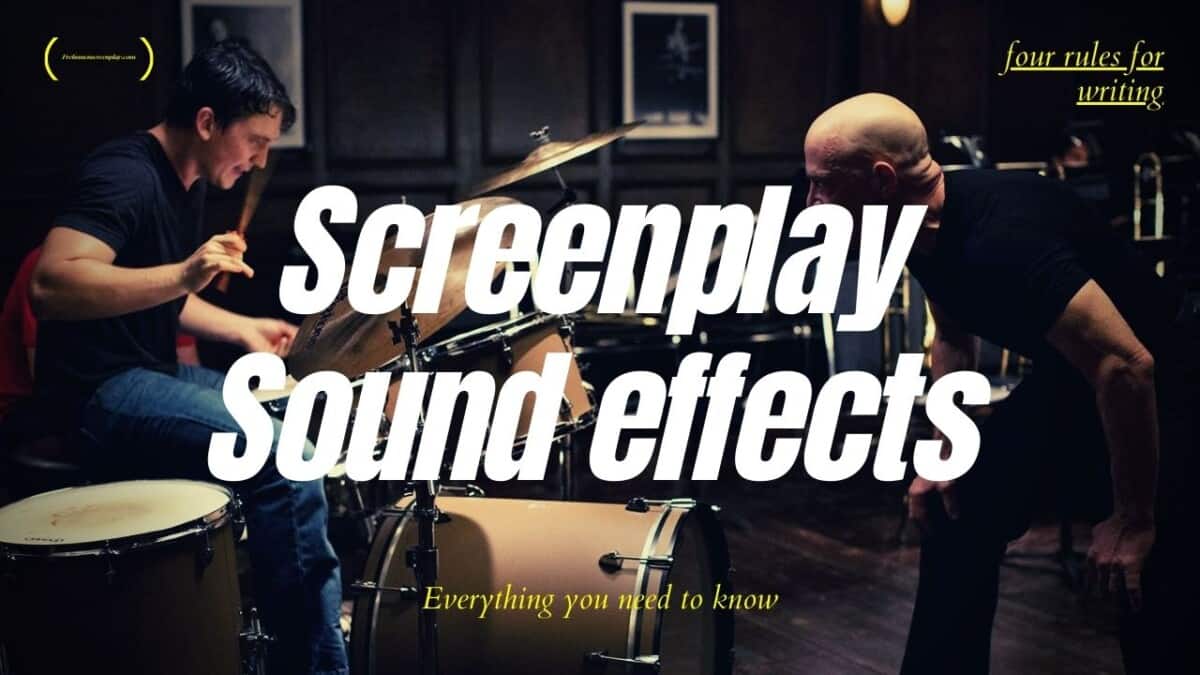 The question of how to use sound is one I had years ago when writing my first screenplay. The use of it is undeniably useful in a film, but some of it can be used in screenplays for the same reason in production, to tell the story.

This way of writing, you type as a stand-alone line. Like if it were a separate action line. Both methods are designed to stand out to the reader with some form of emphasis.

When to use sound effects in a screenplay?

The purpose of sound effects in a screenplay is to illustrate what’s happening in the story to the reader. The reader can’t see in your head. So this is how you can make those dramatic sounds in your next thriller or action screenplay.

Use sound effects when things aren’t obvious to the reader of what you’re conveying.

Without the “SPASH” you have no idea what Sarah did. This reveals how much of a daredevil Sarah is. It also shortens the action line. Read the same three lines without the sound effect.

See not the same effect. One word can dramatically improve the surprise to the reader and Bobby.

When not to use sound effects in a screenplay?

1 Don’t use it for Character Voices. If a character is yelling, you don’t need to put that in the action line as a sound effect.

This is wrong Instead, save character voices for the parenthetical lines underneath their name.

2Use Them Wisely. Don’t go crazy with sound effects they are for dramatic effect. One or two per action line is excellent. When you move towards the place when your script looks like all caps you might have a problem, some writers can get away with this because of their reputation. For example, read Quintin Tarantino’s, Kill Bill. The action scenes are littered.

Example of what not to do

The car’s tires HOWL around the corner… the engine BEATING past its breakpoint… then CRASHES into a car on the other end… EXPLODING into the water ROCKETING the door handle towards the sky.

The car’s tires HOWL around the corner… the engine overheats past its breakpoint… then CRASHES into a car on the other end… EXPLODING into the water propelling the door handle towards the sky.

By including too many sound effects you take away the effect of having them in the first place.

3 Capitalize the sound, not the object.
For example

Is up to your creativity.

How to write off-screen sound in a script?

It’s called a pre-lap. It’s when any sound for the next scene starts before we leave the current one. It’s more of a way to transition in the script.

Oliver Stone in the Midnight Express

We MOVE to HANDS, TIGHT – drawing out a strip of adhesive tape, SCISSORS move in TIGHT…SNIP!

And then, HIS E-PHONE PAGER starts pulsing — hum — hum —

The scripts that will naturally overuse sound effects are horror, thriller, and action films and this is ok. The only way you will get into any trouble for this is if you use them wrong.

No one wants to see a bunch of KABOOMS! Every single line of a script will be annoying even if it’s part of the story. So I suggest you write out “the building exploded.” Doing this will keep your significant moments dominant and your minor moments minor.

Why use sound effects at all?

A screenwriter can go a whole 90-page screenplay with zero sound effects. Its been done before to some extent. Sound effects are for dramatic effect. When your mother read you a bedtime story, it was always more entertaining when she made sound effects. It put you in the story as opposed to just listening to it.

The Second point as seen in the examples above is it shortens sentences giving readers more information faster. Explaining something can take a reader out of the story sooner than anything else. By using sound effects, you’re pushing the story forward quicker.

Think of it as editing a film. Instead of having your characters run out of the building as the timer goes off creating an explosion that topples the building. Just right KABOOM the building falls.

In conclusion, now you know everything about writing sound effects in scripts.

Now Its time to hear from you:

Did I miss anything in this script?

Which techniques are you planning to use and why?