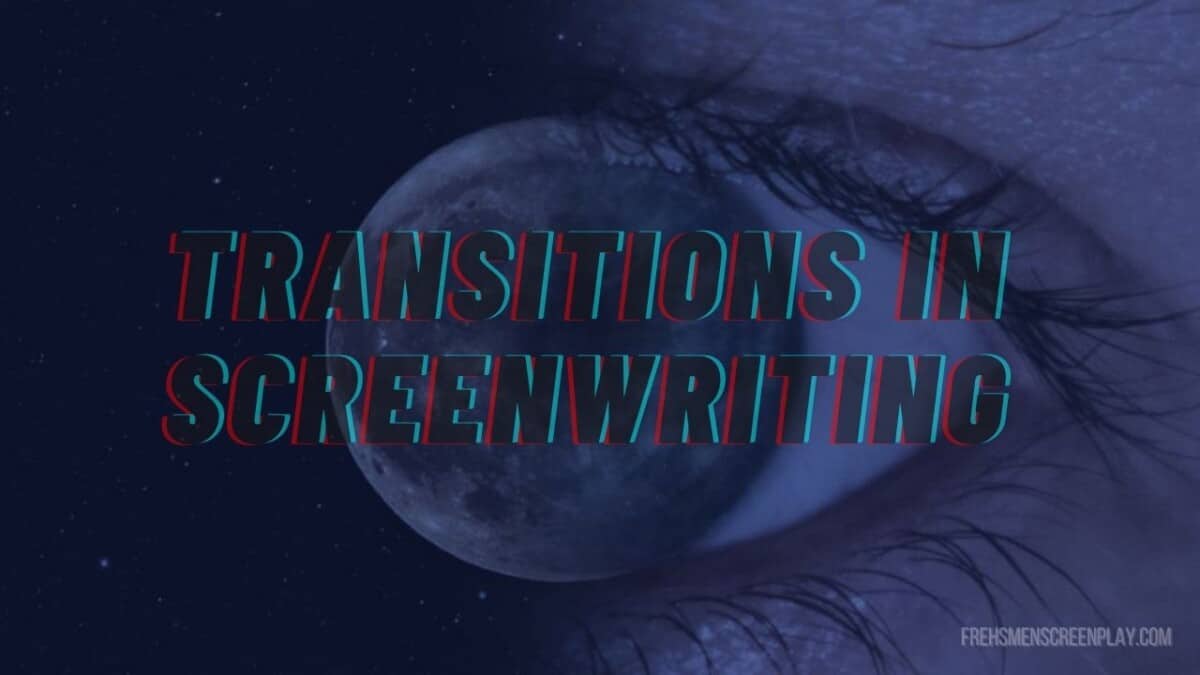 Just like in a movie in screenplays, there are transitions.

In this post, we will cover everything you need to know about transitions in screenwriting, from what they are, how to use them, where to write them and when not to.

What is a Transition in a Script?

You see transitions in movies all the time. Whenever a scene ends, there is some transition, even if it’s a simple cut to another location.

What are All the Transitions in Screenwriting?

Below are a list of every transition in screenwriting from most popular to least. Also charted are their uses

Now that you know all the transitions and the purposes. Let’s see a visual example of how they are used in the final film.

How do you Write a Transition in a Screenplay?

Screenplay Transitions are mostly found on the right side of any script, but a few like FADE IN and FADE OUT are found to the left.

Unless it’s FADE IN: this should be in the top left, and the reader sees first when reading a screenplay.

FADE OUT. also should be written on the bottom right but it ends in a period not semicolon like the other transitions.

And a PRE-LAP is the only transition written next to the character’s name speaking in the dialogue blog.

Are Transitions Necessary in a Screenplay?

1.) Transitions in screenwriting are Implied

Transitions are implied now. When we see a new scene heading in a screenplay, we assume a cut to a new scene. And the director is responsible for that transition and has the final say on what goes there, not the writer.

Transitions are a very old-school way of cutting from one scene to another, back in the 1950s, when screenwriting was relatively new. Screenwriters used them all the time to inform the director and editor. Screenwriters had more power over the final image.

Now screenwriters have little power over the final look of a film, and some argue they have zero power at all. When a director sees things like editing cues, camera shots, or acting direction, they normally are ignored.

Should I use Transitions in Screenwriting?

But if you do they should be used sparingly. More on that below.

1.) Its perceived as amateurish writing

When a reader sees transitions in a screenplay it is seen as the mark of an armature writer. Most producers stop reading after a couple of transitions seen in a row. It shows your trying to control the overall image on the screen. Which means you less focused on the story.

There is an inherent pace, flow to reading any story. A transition stops that flow. It’s jarring and throws the reader off. Because then, on top of visualizing the story, they have to visualize the transition as well. Its overload.

Part of the magic of screenwriting is to get your point across to the reader in the least amount of words and pages possible if you’re adding additional lines, your failing at this.

When should you use transitions in Screenplays

Yes, like with any screenwriting tool there is a time and a place for using a transition in your script.

I personally use CUT TO: it, in my opinion, is the most versatile transition, and it’s still expectable to be used today. It not only can be used for jump cuts but also represents jumps in time and cutaways. But…

I only use it to enhance the story.

For example, In a scene I wrote, my character kills another, but I wanted to hide what she actually did. I used the transition CUT TO: to snap the reader out of a quiet, calm, and close situation to a reckless fire.

here is the scene.

I hope you enjoyed my ultimate guide to screenwriting transitions

Which tip from today’s guide are you going use?

What transitions have you seen in screenwriting?

Screenwriting Transitions: The Ultimate Guide
Posted in How to Guides By D.K.WilsonPosted on May 8, 2021October 5, 2021Tagged transitions, transitions in screenwriting