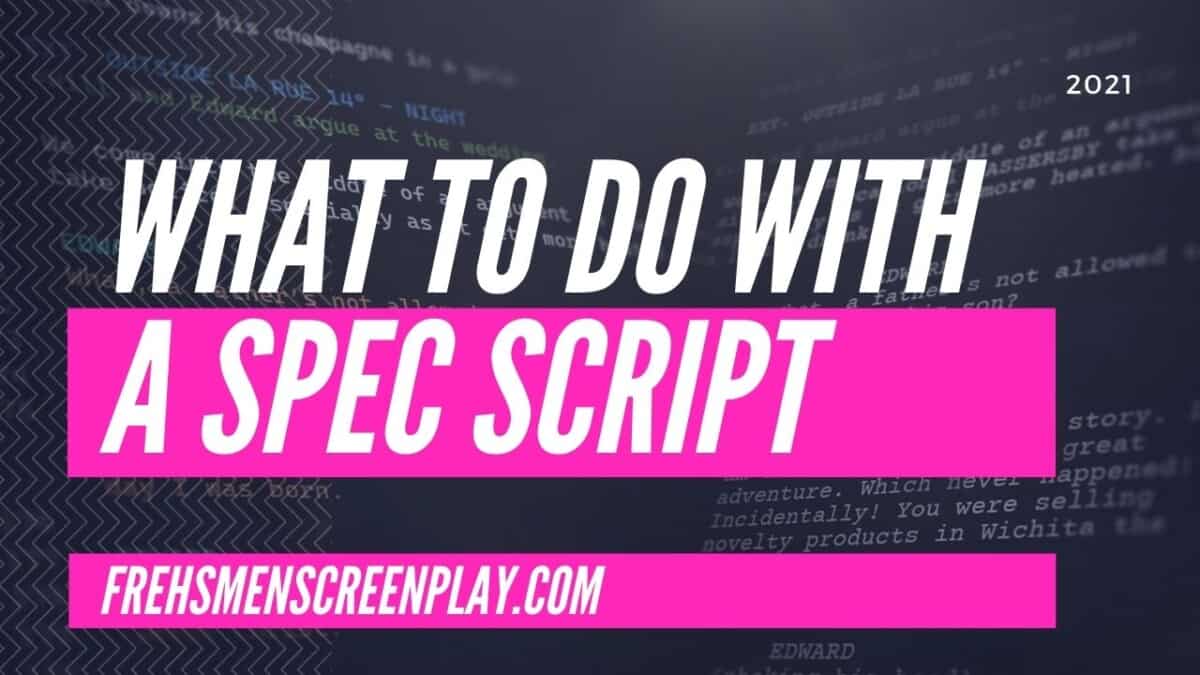 Did you know that most people never even write one script? Your already ahead of 90% of people in Hollywood. At least that’s what I’ve heard from producers.

Now begs the question. What to do with a spec script?

This post will teach you 5 things you can do with a spec script from your computer.

I will tell you what to do step by step.

1.) Get your Spec Script Professionally Analyzed

Most people will skip this step, yet it’s the most important.

Did you know most spec scripts never sell? That’s a fact. Last year only 25 spec scripts were sold out of thousands written. Yes, a deadly virus was running wild, but this number has been declining every year since 2013, which only had 100 sold.

Competition is tuff, and it will only get more challenging. One way to meditate is to get a second opinion. Maybe even a third. From someone who has the industry knowledge called…

People who read and analyze screenplays and give feedback to help you write a better second draft.

These people don’t include family or friends. They are total strangers who sometimes, in their spare time, analyze screenplays for money.

They will give you the strengths and weaknesses of your plot character and writing style. So you can then work on the faults in the next draft making your script even better. You don’t want a 7/10 script. You need a 9/10 script.

But not every script consultant is who they claim to be. Remember to check their credentials.

Check out this video explaining what I mean:

Here is a list of Script consultants I recommend:

Keep in mind this list of people are still working in the industry in some capacity. So like all industry professionals, if they find a worth wild script, they could pass it along to someone who could get you a deal.

Screenplay competitions are one way to get noticed in the industry. Placing the top 5% in a script competition can get an agent, manager, or even a sale.

I made a deep, comprehensive list of all the script competitions you can submit to every year that, if you do well, will get your spec in the right hands.

3.) Submit your Spec Script to an Online Aggregator

What is an online script aggregator? It’s a website that functions as a marketplace—collecting spec scripts and categorizing them to make it easier for producers to find.

One of the most popular ones is The Blacklist, known for its tuff grading scale. But getting a score of 8/10 will get you noticed by the people with the money.

Here’s a chart of all the ones I know:

4.) Pitch your Spec Script Directly to a Producer

Yes, you can send your script directly to a producer. Keep in mind that this method is not the best for writers getting started because, without an agent or a manager representing you, most scripts get ignored. As in the conversion rate is maybe 1%. With that said.

I’ve laid out this method step by step.

For more information on that, check out this article below.

5.) Send your Spec Script to a Production Company

Yes, you can send your script directly to a decision-maker at a production company.

A while ago, I interviewed the head of VPF or Virtual Pitch Fest and script consultant David Zuckerman, and his company are doing some fantastic things.

Every single time you pitch your script to a company, you are guaranteed a response from that company.

In this post, you have been armed with five amazing things to go with a finished script. Please check out all the links and let me know if you have any questions. I will always respond.

What method have you tried? What were the results?