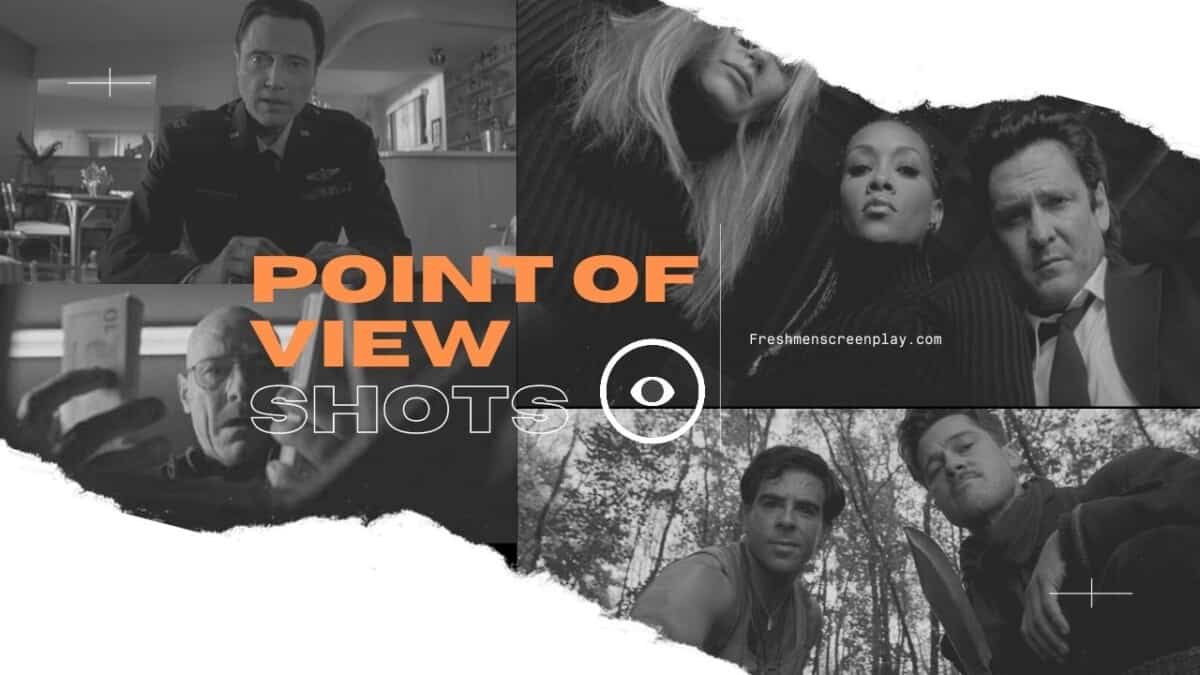 Welcome to the P.O.V (Point of View) shot guide. Here we answer all questions around when, why, and how to use this magical technique when screenwriting.

What is POV in screenwriting? P.O.V stands for Point of view. It’s used when you want to show the action of a scene from one person’s perspective. We see what the character sees.

This term is under a broader terminology in screenwriting called a subheader.

P.O.V or Point of view shots are widely used throughout movies and T.V shows. It puts the action right into the audience’s face. But how would you a screenwriter use them in your screenplay?

This is the most famous and widely used way.

If it’s something quick. You can write:

But there’s another way to write a P.O.V shot that will be less intrusive to the reader’s eyes.

Do you see the difference?

Example two keeps the flow of the screenplay and the first example may bring the reader out of the story.

Let’s see a famous example of how other screenwriters have used them in the past.

Get out (2017) has some great P.O.V shots using the main character’s camera.

Why use P.O.V Shots?

This shot allows the director to show rather than tell.

P.O.V shots can create tension and dramatic effect. Almost every horror movie that’s worth anything has at least one P.O.V shot.

Speaking of genres, what are the ones that use it most often?

Because it boxes the viewer in a corner, creates tension, controls our eyes, limits visual information, and scares the mess out of you.

Each of these genres has at least a couple of P.O.V shots per film.

Here are a few examples of how they are used.

The film Paranormal Activity is a one-hour-long CAMERA P.O.V shot.

Take a look at this horror short that got David F. Sandberg a writer/director career in Hollywood.

The film wouldn’t work without the P.O.V shot.

Why You shouldn’t use P.O.V Shots

Yes, not every time you get a chance to use one you should.

Like with anything the more you use it the less effective it is.  Using a POV shot once to see a killer could have a huge effect.

but if it’s the fifth one in the last ten minutes. It won’t be as effective. So…

In my last feature, I wrote. I used two P.O.V shots in the entire script. It was a horror.

When to use a P.O.V Shot

Use a point of view shot in highly dramatic situations.

Like in all the examples we went over. The highest point of tension in a thriller. A scare in a horror. The protagonist falling in love in a romance.

These moments deserve more. So give more.

When writing one thing I noticed is the more words a description has the slower the image appears to the reader. The fewer words the faster the image. P.O.V shots slow the reader’s speed and give focus.

Use this to your advantage.

I think this subheader is a great way to enhance your screenplays and paint a perfect picture for your reader.

In what ways are you going to use P.O.V shots?

How have you seen it used differently from the examples shown?