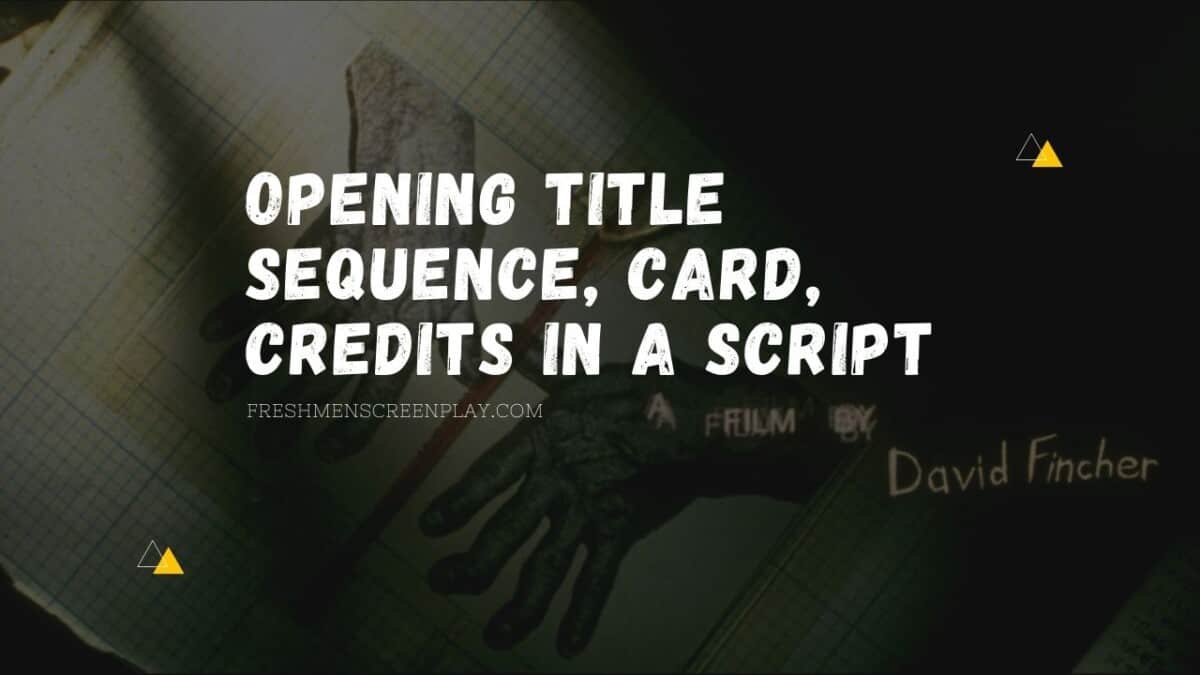 At the beginning of any movie, some titles display. It shows us the director, writer, producers, etc. It’s called a title sequence.  Sometimes it goes by other names like:

A title sequence is a flash of intresting visuals and sounds to display the movie creator’s names most entertainingly. They are giving credits to the makers without boring the audience.

How would you write one in a script?

Just make sure you address when the end of your sequence is completed to write “END…” So the reader understands that the story is starting now.

When writing title sequences, it’s also common to see SUPER or SUPERIMPOSE subheadings. From here, you can write director, actor, producer names—in between your visuals.

Usually, the director and editor will figure out the best place to put the written titles.

Please take a look at some examples below and how screenwriters wrote them in the script.

They had an excellent description and just the title in the middle of the page.

This one is very detailed in the subheading, but it’s more of a production script.

The shorter, the better, preferably one page or less. No one wants to sit in a movie with a three-minute title section unless it’s incredibly intresting.

You can start the titles within the first ten pages as a general rule.  Anything after that might confuse the reader.

If you’re going to write one, don’t do it for fun. have a purpose.  Write one using the tone for the story in mind. The most famous examples give the pulse of the movie in the title sequence.

What do you understand from these movies without even watching them?

Why write a title sequence in your script?

Ask yourself whats the purpose of writing a title sequence?

If your director wants to have the entire movie on paper, fantastic, but if you’re writing a spec script. Your wasting paper.

I only see title cards in a script if it’s a production-ready script. Meaning a producer is paying you to write a script for production, which tends to have more detail than a spec.

If you can find a way to introduce the story in a title sequence, it can be a great idea, just like the lord of war opening title. It was a mix of (V.O) voice-over dialogue and images for you to understand the world of the story before we even see the main character.

Remember, when using any screenwriting technique, use it for a purpose and have a good one. So when the producer reads it, he doesn’t ask, why is this even in here? What’s the point?

Why are you writing a title sequence in your script?